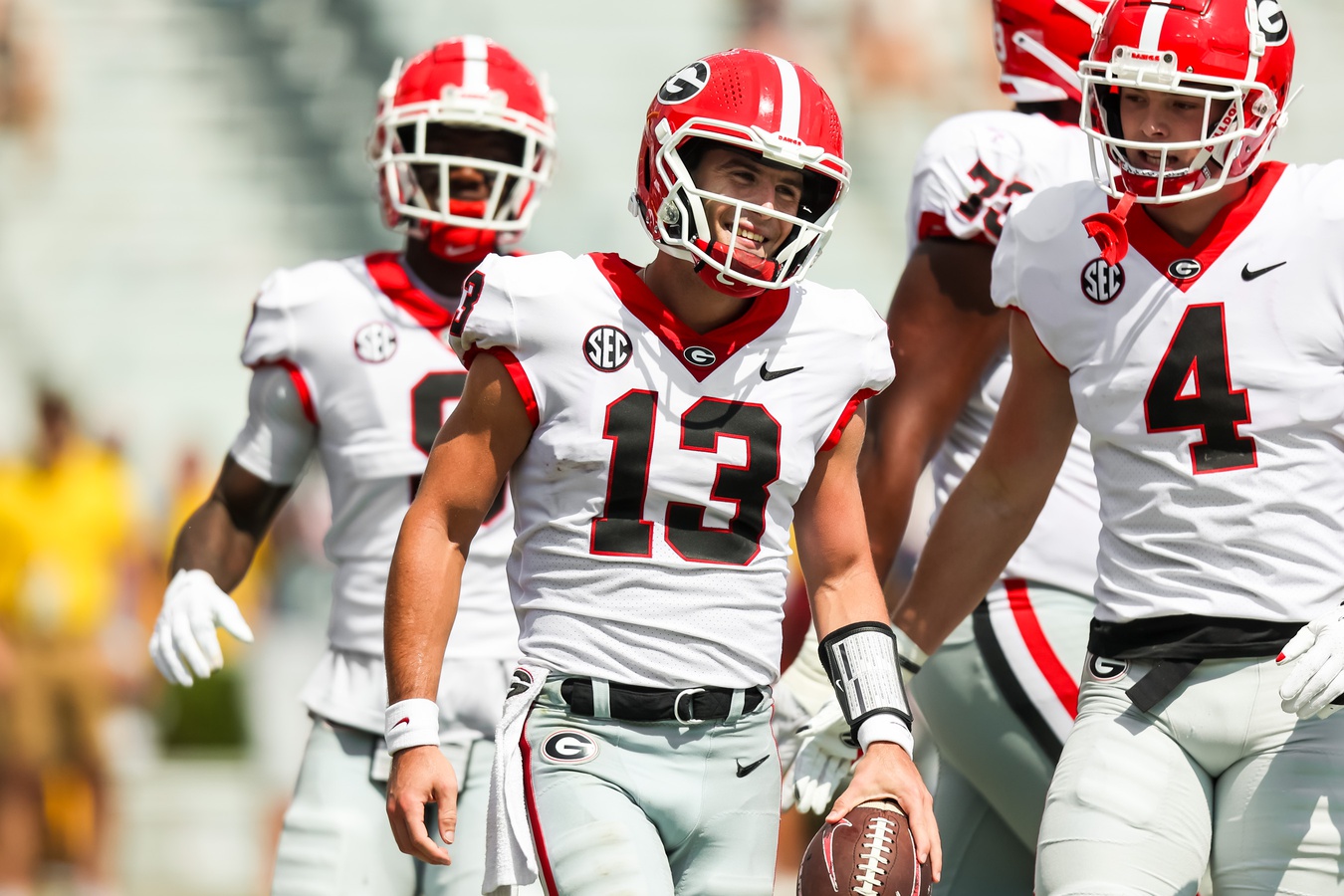 We’re now three weeks into the 2022 college football betting season. The Big three of Alabama, Georgia, and Ohio State remain unblemished and have looked dominant for the most part. While the Crimson Tide got a scare from Texas, they still lived to tell about it and look poised to make another CFP run.

That being said, the Bulldogs most recently jumped them in the polls as well as on the odds to win the national championship. With the third and fourth slots there for the taking, the Buckeyes have done what’s been needed to hold their positioning; as have the Clemson Tigers.

With conference play set to begin over the next couple of weeks, now is a good time to take a look at some of the major movers to see if there’s any value that should be taken advantage of at BetRivers Sportsbook now before all hell breaks loose in the coming months.

*All remaining teams greater than 125-1

Is it seriously possible that Kirby Smart’s Dawgs are better than last year’s version that won it all? It’s certainly a possibility as dominant the team has looked through the first three weeks. Because of it, Georgia has leapfrogged the Alabama Crimson Tide as odds-on favorites to hoist back-to-back national title trophies. The defense has been every bit as nasty as last year’s version in giving up a total of 10 points, while the offense has been even deadlier with Stetson Bennett currently making a Heisman Run. He currently sits behind the big three at 6-1 which is a fraction of the 20-1 offering at the season’s outset.

With Kent State, @Missouri, Auburn, and Vanderbilt lined up over the next month, it’s possible the Dawgs odds to win it all shorten up even more before taking on the toughest part of the schedule once the calendar turns to November.

The story out west is undoubtedly Lincoln Riley’s Trojans who’ve bolted out to a 3-0 SU and ATS start by way of trotting the No. 7 ranked scoring offense onto the gridiron and backing it up with a turnover forcing defense that’s conceded fewer than 20 points per game. While an injury to Fresno State QB Jake Haener allowed for last week’s box score to come off a bit more impressive than it was, USC could turn into a force if the defense truly is as good as it was last week.

The opposition faced to this point hasn’t been the greatest, but that’s about to change starting this week with a trip to Corvalis to battle a pesky colony of Oregon State Beavers. If Caleb Williams can keep this team undefeated until the middle of October, that road trip to Salt Lake City is going to be for all the Pac-12 Tostitos!

Though Steve Sarkisian’s kids have already been upended once to date, they’re still getting the benefit of the doubt from linemakers with that one-point loss to Alabama letting it be known this team has the goods. With the Big 12 there for the taking and the Horns potentially owners of the best defense in the conference, you mustn’t count this team out.

The burnt orange has winnable games against @Texas Tech and West Virginia lined up before the Red River Rivalry with Oklahoma. Win that game, and the Longhorns will put themselves in a position to snag the fourth bid should Clemson get tripped up in ACC play; something that has a decent probability of occurring. For this to occur, Bijan Robinson must make a run at the Heisman with Quinn Ewers likely to remain out of commission until early November due to the clavicle sprain suffered against the Crimson Tide.

While the Maize and Blue left a bad taste in many mouths after getting skunked in the CFP semis last season, Jim Harbaugh looks to have another team at his disposal capable of making a return visit. His squad’s odds to win it all have nearly been cut in half since first hitting the board. They’re likely to shorten up even more moving forward now that the keys to the offense have been handed over to exciting sophomore phenom J.J. McCarthy whose talent has allowed for the unit to take it to the next level.

The schedule has however been a sick joke to this point. CFB bettors will better be able to gauge this team moving forward with Big Ten play set to open against Maryland. Win that game and survive back-to-back road trips to Iowa and Indiana and we’ll be cooking with gas!

If the College Football Playoff is to be turned on its head, it’s the NC State Wolfpack that will more than likely need to make it happen. The ACC has long been a stomping ground for the Tigers, but NCST found a way to snap an eight-game losing streak to Dabo in overtime last season. They’ll need to work their voodoo in Death Valley this time, which is a feat that hasn’t been attained since 2002!

The Wolfpack’s odds of winning it all still offer up an attractive 50-1 return after initially hitting the board 100-1. While the offense leaves a bit to be desired, the other side of the ball is no joke with it holding all opposition to just over 12 points and fewer than 296 yards per game. It’s also been fantastic at forcing turnovers. I’d be all in if Dave Doeren had a running game. Unfortunately, it doesn’t…