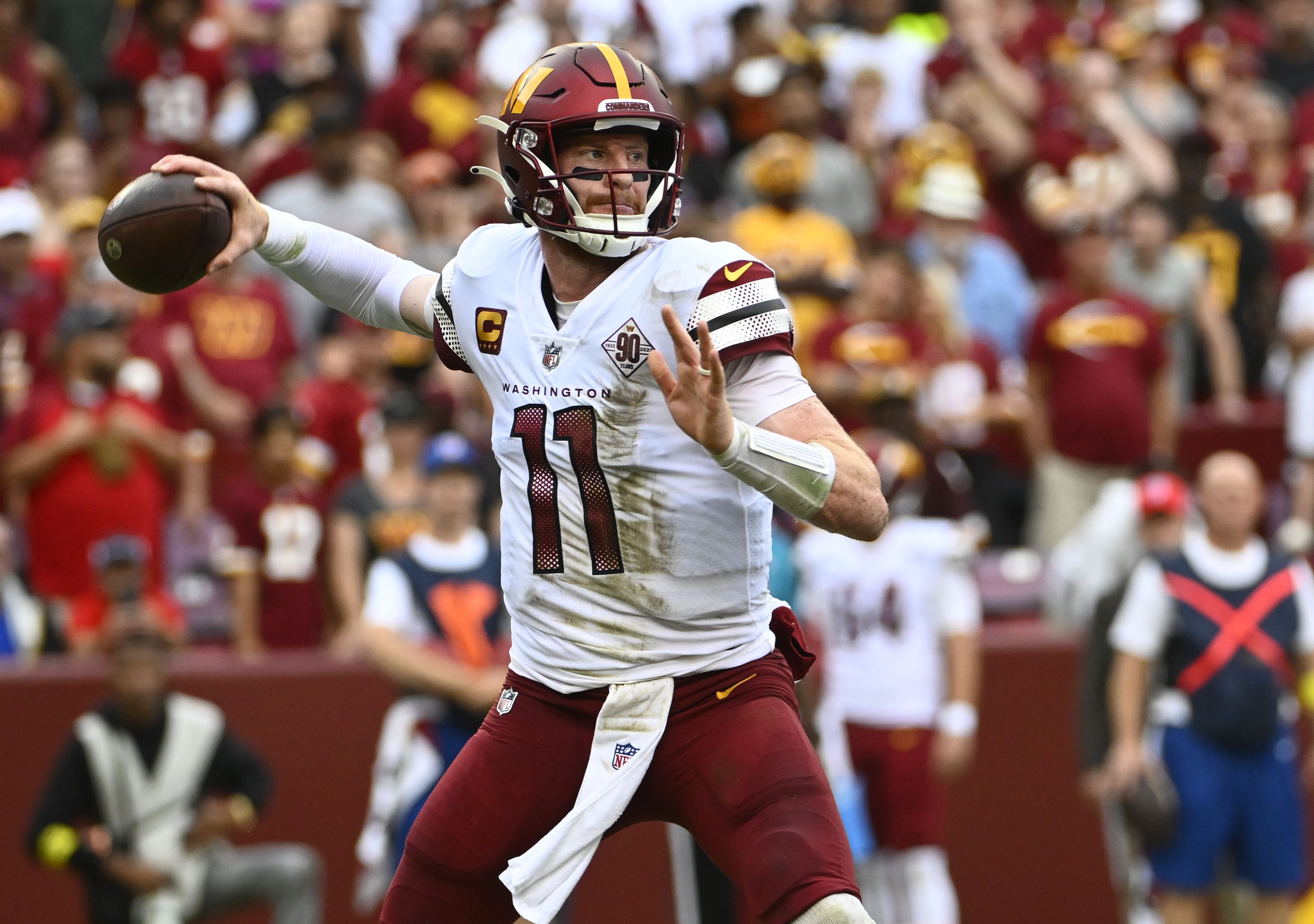 Week 2 played out exactly like the opening week. My spread and total betting were superb at PointsBet Sportsbook, but I once again gave some of the profits back with my prop bet selections. D.J. Chark proved to be an enormous disappointment after failing to reel in any of his four targets with two chances being of the deep shot variety. Matt Ryan was simply wretched and grossly failed to surpass his passing yards prop, while I came two yards shy of cashing the over of Kyler Murray’s rushing prop.

The two winners proved to be Curtis Samuel and Javonte Williams who surpassed their receiving yards and rushing + receiving yards props respectively. Here’s to hoping the third time is the charm in Week 3!

Instead of asking the Commanders QB to surpass his modest 245.5 passing yards prop, I’m going to go for the glory and look to cash in on an alt line in the Carson Wentz revenge game. He’s already surpassed the 300+ yard plateau in his first three outings and has the offensive weaponry surrounding him to do it a third straight time.

I’m expecting points to dent the scoreboard in this matchup with the Eagles. Whether it’s a competitive back-and-forth affair or Washington is forced to play catchup like it did last week in Detroit, I fully expect Wentz to get his either way.

The Jags popped their collective cherry last week in a big way by holding the division rival Colts to a doughnut. In the 24-0 triumph, Lawrence put forth an ultra-efficient effort in completing 25 of 30 passes for 235 yards and a 2:0 TD/INT ratio. While impressive, the outing occurred at home with the humidity playing a toll on Indy on both sides of the ball. I don’t expect that to be the case in SoFi where the Chargers defense is destined to give him a much rougher day at the office.

LA’s secondary is no joke and I fully expect the home team to get in and out with a win as quickly as possible so as to protect Justin Herbert from any further injury. LA represents Lawrence’s toughest assignment to date, and I don’t expect him to pass it.

The Vikings RB1 was nothing but an afterthought in Monday’s ugly road loss to the Eagles. Due to falling behind 14-0, the Vikings quickly abandoned the running game which saw Cook only carry the ball six times. I highly doubt the Lions find a way to run and hide in their first road game of the season against a divisional opponent.

As such, you can expect Cook to be an integral piece to the Vikings offensive attack. Detroit’s hemorrhaged an average of 152 rushing yards per game through two weeks, and stud DE Aidan Hutchinson is ailing. He’s averaged 106.3 rushing yards the six times he’s squared off against Detroit, and I expect him to churn out another big tally on Sunday.

While I expect Luke Getsy to incorporate the passing game more this week against the Texans with it being made widely known that Justin Fields has only thrown the ball a total of 28 times, I still expect Montgomery to get his on the ground as well.

He just went for 122 on 15 carries last Sunday night against the Packers who boast a similar statistical run defense as Houston who’s been ripped for an average of 163 yards per game through the first two weeks. While most of that damage was accrued by Jonathan Taylor and Javonte Williams, Monty is fully capable of putting up another crooked number.

The Jets just allowed Amari Cooper to go over the 100-yard plateau last week and gave up a number of big gainers to Rashod Bateman and the Ravens the week prior. Though New York enters this tilt with a better-than-league average pass defense (No. 14), it’s about to take on a whole new animal in a winless Bengals squad that’s looking to turn its season around.

It’s been tough sledding for Joe Burrow and Co. early on, but this is an excellent situation to take advantage of with Robert Saleh’s youngsters coming off a huge comeback win in Cleveland. While they’re still busy reading their press clippings, I fully expect Chase and Burrow to go to work in hopes of getting off the schneid.