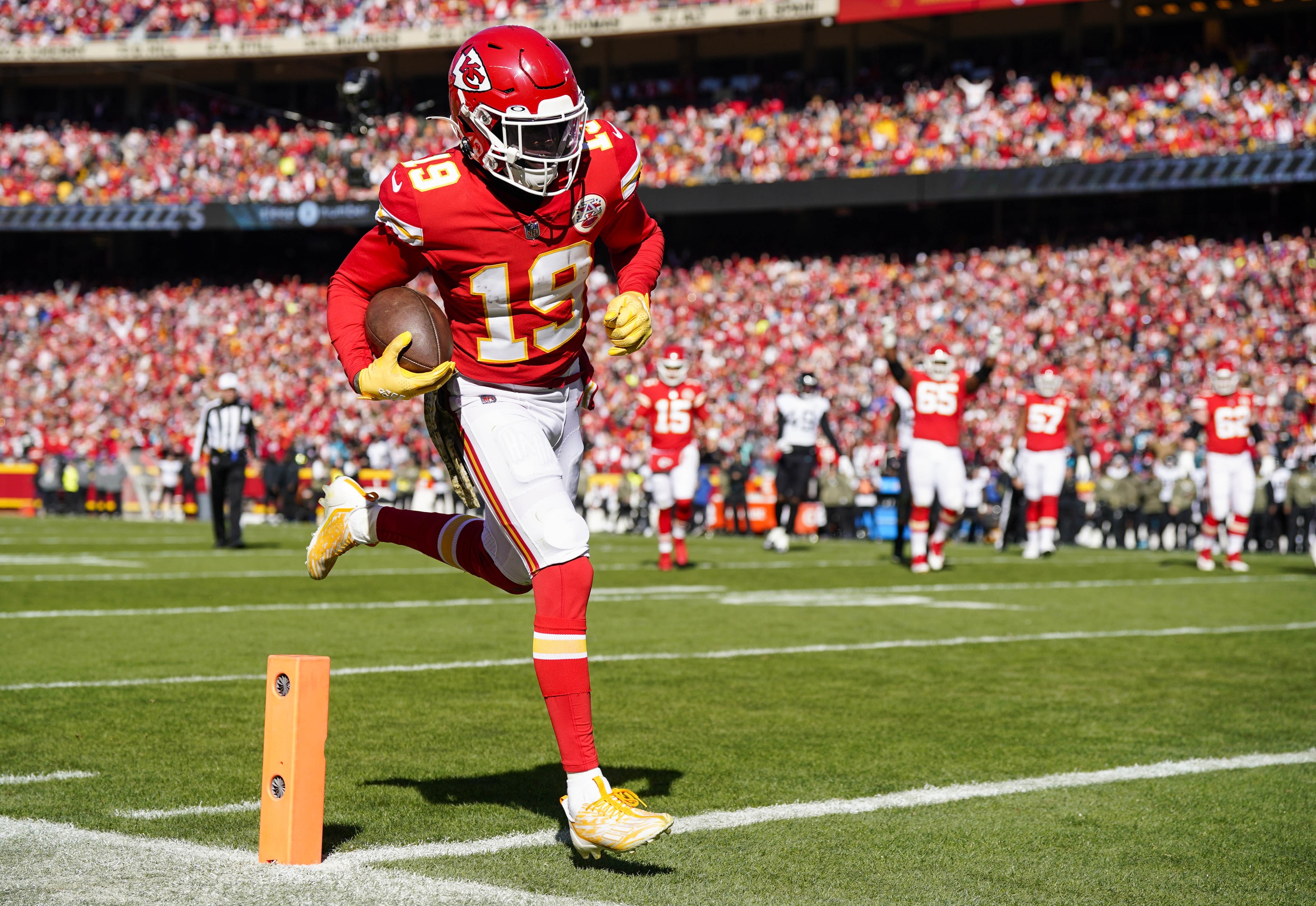 I’m still not over the bitter pill forced to swallow at the conclusion of the Monday nighter when DeVonta Smith was penalized 15 receiving yards due to the Eagles lateral shenanigans at the tail end of their shocking upset at the hands of the Washington Commanders. With it, a winning weekend turned into a wash after easily cashing in with Donovan Peoples-Jones and Courtland Sutton while George Pickett just came up just short of his receiving yards target at PointsBet Sportsbook. Ponying up juice has been the “MO” of my wide receiver props the last few weeks, and I’m sick and tired of it. Big weekend ahead in Week 11!

It’s highly possible the Chiefs newest wide receiver will be the offense’s WR1 when the Chiefs take to the field to battle the Chargers in a pivotal AFC West clash in Week 11’s installment of Sunday Night Football. Even if JuJu Smith-Schuster and Marquez Valdes-Scantling each give it a go, I absolutely love this spot for Toney running up against a Los Angeles defense that’s played a bit over its head the last two weeks in opposing a 49ers squad still trying to find its offensive identity and a Falcons squad allergic to throwing the football. Kadarius Toney saw his route participation jump to 43 percent last week and he combined for 90 scrimmage yards after turning his two carries into 33 yards. This game’s O/U clocks in at 52 with the Chiefs’ team total in the neighborhood of 28.5. As readily able the Chargers will be to match points in what I expect to be a back and forth affair, look for Toney to be an integral part of Kansas City’s attempt to stay one step ahead.

You start your tight ends against the Arizona Cardinals and that’s exactly what I’ll look to do on Monday night when the 49ers lock horns with them in Mexico City. George Kittle has been an enormous fantasy disappointment evidenced by No. 85 ranked No. 18 overall. He’s destined to catapult himself up the rankings on MNF with the Cardinals hemorrhaging yardage and touchdowns to the position. Zona has conceded 778 yards (No. 32) and better than an 82 percent catch rate by opposing tight ends, and Kittle has historically taken it to his division rival getting them for 518 yards and nearly 15.0 yards per reception through eight career games. The Niners big man has been quiet of late, but this is a smash spot I expect him to take full advantage of. A number had yet to be posted at the time of this writing, but I’m comfortable backing the over of anything in the mid-50s.

If you take a gander at my QB props piece for Week 11, you’ll notice I’m once again bullish on Russell Wilson going over his passing yards prop after he cashed a ticket for us last week at Tennessee. Jerry Jeudy isn’t expected to be healthy enough to return to the playing field for this one after suffering a sprained ankle that knocked him out versus the Titz early in the first quarter. Courtland Sutton proved to be the beneficiary after getting peppered with a team-high 11 targets that he turned into 66 scoreless yards. The Raiders secondary ranks dead last in pass DVOA and allows upwards of 250 passing yards per game. Wilson and Sutton made sweet music with one another the first time around against the Raiders, and I expect the second act to be even better than the first. Sutton is way overdue for a boom week, and I think we get it here so hit the over and entertain the thought of throwing some beer money on him hauling in a touchdown or two as well!

This selection on Mooney goes hand in hand with the fact that I believe Justin Fields puts forth his best passing performance of the season against the Falcons. Atlanta’s pass defense has been shredded all season with no team in the league giving up more passing yards per game (280.1). Since coming up with that 28-14 upset of the 49ers back in Week 6, the Falcons pass defense has been taken to task getting gouged for 934 yards and 14.8 yards per reception. Most of the damage has been done out of the slot, and that’s where Mooney has run 72 percent of his snaps. Though Chicago still averages a league-low 20.8 pass attempts per game, it’s upped its output to 24.0 per game over the last three weeks. While A.J. Terrell is expected back for the Falcons this week, he’ll likely be paying more attention to Chase Claypool. Atlanta’s conceded 12 tuddies to WRs to date; adding a Mooney score at +210 in a same game parlay is enticing to say the least!