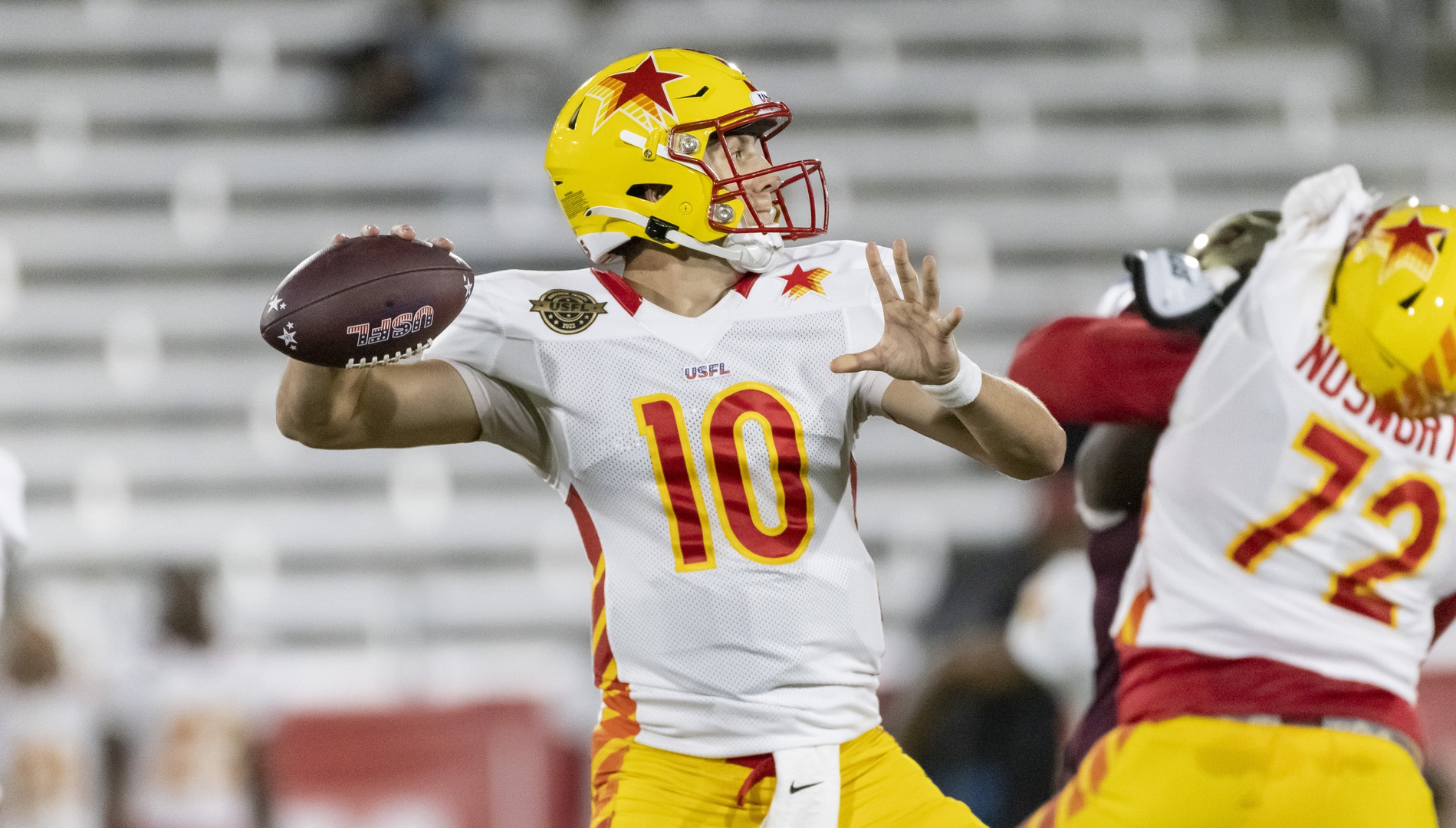 As we head into the penultimate weekend of the 2022 USFL season one playoff spot remains up for grabs. And that could be decided on Sunday when the second-place New Orleans Breakers (5-3) take on third-place Tampa Bay Bandits (4-4) for the right to play South Division winner Birmingham in Canton, Ohio. New Orleans can secure the final playoff spot with a win and beat Tampa 34-3 in Week 2, in what is the biggest blowout of the season. The Breakers are laying 3.5-points as a USFL betting pick in the rematch.

There are other storylines to the season with the biggest being Birmingham’s quest for a perfect season. The Stallions moved to 8-0 with a nail-biting 10-9 win over New Orleans last week, though they failed to cover the USFL betting line for a second straight game falling to 6-2 ATS.

While they have yet to lose, half their games have been decided by 6-points or less, so they are beatable.

Some would argue that the New Jersey Generals are the best team in the USFL. They won their seventh straight game with a payout over Pittsburgh as a 9-point favorite improving to 5-2 ATS during their streak.

They also boast the league’s top offense and defense in terms of yardage.

From a betting perspective it’s hard to know where Birmingham and New Jersey stand heading into the final weeks. They’ve already clinched division titles and with no home field advantage at stake there’s no point in going all out. The Stallions do have that whole undefeated thing hanging over their head and they are the biggest USFL favorite this week and this season laying 12.5-points for their matchup with Houston.

The Philadelphia Stars are the hottest team in the USFL with three straight wins and payouts producing the most points in a game this season in their playoff-clinching 46-24 win over Michigan. Behind Case Cookus the Stars averaged nearly 39 points in that span while cashing the OVER on the USFL betting line in five straight games. You can make football bets online at Sugarhouse and wager on the USFL all season.

Michigan is the best of the three 1-7 teams, which isn’t saying much. They were the preseason favorite on the USFL futures odds, but injuries and bad luck doomed them. They have shown signs of being competitive and after rotating through three different starting QBs they’ve settled on Paxton Lynch. He wasn’t bad last week throwing for 251 yards and two touchdowns, but a pair of interceptions among three turnovers was disastrous. After pitching the league’s lone shutout in Week 3, the Panthers allowed an average of 32.6 points during their five-game losing streak. The first matchup was a close 10-6 New Jersey win in Week 2, and while I expect more points the UNDER is still a strong play. And the Generals can relax a bit after wrapping up a playoff spot allowing a Panthers cover.

I’m not sure how much of an emphasis Skip Holtz is putting on an undefeated season, but accomplishing that in any league is special. The Stallions have shown plenty of determination and some of their wins could have easily gone the other way. But they didn’t and the club is two victories away from immortality. They may have played their worst game last week yet still beat a good New Orleans team on a late field goal despite a few missed field goals and three turnovers. Houston was without starting QB Clayton Thorson, leading rusher Mark Thompson and receiver Isaiah Zuber last week and it showed in their 13-3 loss to Tampa Bay. They played strong defense against a team that needed a win but didn’t have the firepower. That sounds the same for this week and 12.5-points makes the Gamblers a good USFL betting pick.

With the final playoff spot on the line the teams with a chance of earning it collide. And I have to believe Tampa Bay has some added incentive after getting steamrolled 34-3 in Week 2. The Bandits were expected to be good offensively with Jordan Ta’amu under center, but that’s been their weak spot. They’ve scored more points than only Houston and Ta’amu has completed only 57.8 percent of his passes with nine interceptions. Kyle Sloter leads the USFL in passing yards but also has a league-high 10 picks. With turnover prone QBs and strong defenses I see points hard to come by making the UNDER a good play. I haven’t seen improvement from the Bandits since that first meeting so I’m backing the Breakers.

In just a handful of games Case Cookus has emerged as one of the bright stars in the USFL. He had quite a game last week completing 20 of 26 for 247 yards and four TDs with an additional 102 yards on three rushes, including a 79-yard scoring jaunt. During Philly’s three-game winning streak where they’ve scored at least 35 points, Cookus has seven TD passes and completed 67.5 percent of his passes. I don’t see Pittsburgh slowing him down and the Maulers have no continuity of offense with Roland Rivers their fourth QB to start a game this season. I’ll back the Stars minus the points as my USFL pick of the day.