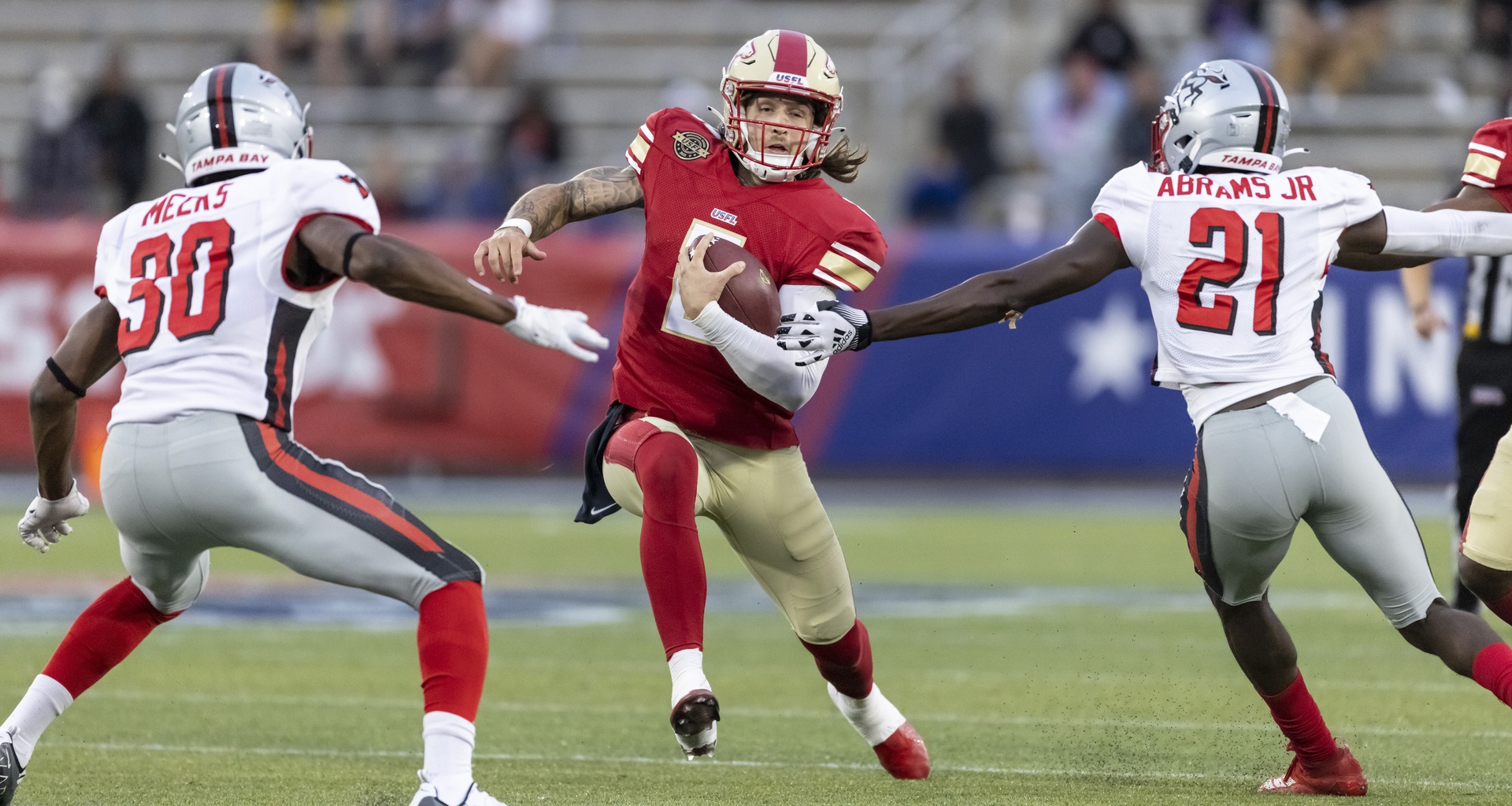 If you wagered on the USFL completing the 2022 season, congratulations you’re that much closer to a payout. That’s about all the excitement that remains as we reach the final weekend of the regular season. All playoff berths are locked up and we won’t worry about a team going undefeated since the Birmingham Stallions were upset, 17-15, by Houston last week as the largest USFL betting pick laying 12.5-points. All that remains is for teams to go through the motions making the final regular season games a nightmare for handicappers.

Birmingham’s loss allowed the New Jersey Generals to take over the top spot in the league’s weekly power rankings. However, the Stallions remain the favorite USFL futures pick to win the league title. With both teams at 8-1 they are on a collision course to meet in the championship game in a few weeks. And speaking of playoffs we know the situation with New Orleans grabbing the final spot with its 17-6 win over Tampa Bay.

In a preview of the North Division playoff matchup, the Generals and Philadelphia Stars square off on Saturday to open the betting slate. The two also go at it the following week when the USFL heads to Canton, Ohio, for its playoffs. Don’t expect the teams to reveal too much with New Jersey opening as a 2.5-point favorite on the USFL betting line.

Something’s gotta give with the team’s combining to win 12 games in a row. New Jersey extended its winning streak to nine beating Michigan, 25-23, while the Stars have won four straight following their 17-16 win over Pittsburgh. You can make football bets online and wager on the USFL all season at Sugarhouse sportsbook.

This has the potential to be one of the best games with the two hottest teams going at it. But with a playoff date set for the following week expect a vanilla playbook. The teams would like to send a message and nothing would be louder than a Philadelphia win. The Stars may have played down to their opponent last week needing a late turnover that was converted into a touchdown to beat the one-win Maulers. Case Cookus, who was brilliant in three previous games, struggled and the Stars managed only 204 total yards. They failed to cover the USFL betting line for the first time in four games and get the league’s top-ranked defense this week. I doubt New Jersey will change its game plan, which has been effective. The Generals also boast the No. 1 offense and are the most balanced team. They beat the Stars in Week 3 in a tossup and I’ll back them minus the points.

With the playoffs looming the Stallions picked a bad time to start slumping. They lost for the first time last week and barely beat New Orleans the week before scoring a total of 25 points in those games. They’ve also been a poor USFL betting pick going 0-3 ATS in their last three games. Despite that, they still rank second in scoring while also boasting the second-best scoring defense. Maybe their loss to Houston as a 12.5-point favorite will be a wake-up call. And they probably couldn’t have picked a better opponent to bust out against. The Bandits are massive underachievers, they’ve struggled to score consistently and they are last in the USFL with a minus-13 turnover margin. Jordan Ta’amu tossed two picks among Tampa’s four turnovers last week and leads the league with 11 interceptions. I’ll back Birmingham’s strong defense.

This is probably the least appealing game on the schedule with each team having one win, but that’s what makes it so intriguing. Neither one wants to finish as the worst so we could see a decent battle. The Panthers have been so close with six of their eight setbacks by seven points or less. They haven’t had a lot of continuity at QB and they’ve been hit with bad luck and injuries. QB Josh Love, who started the season with Pittsburgh, left with an injury as did Cameron Scarlett and Devin Ross, all key figures on offense. Michigan didn’t need a lot of offense in the first meeting pitching the USFL’s lone shutout, 24-0, back in Week 3. The Panthers remain solid on defense and should slow down the lowest scoring team.

Houston pulled off the biggest upset of the season stunning Birmingham, 17-15, last week as a 12.5-point dog. Though the line isn’t as steep the competition certainly is. The Breakers survived Tampa Bay, 17-6, securing the last playoff spot behind a defense that forced four turnovers. The offense continues to sputter and could work out the kinks against the Gamblers, who allow a league-worst 346.7 yards and nearly 23 points per game. However, it was the D that came up big last week. Micah Abernathy intercepted a pass late to seal the victory and Houston also recorded a safety and two sacks to end a 7-game losing streak despite being outgained by more than 100 yards. The Breakers earned a payout with their 23-16 win in Week 4 and they are a better team, which is why they are my USFL pick of the day.