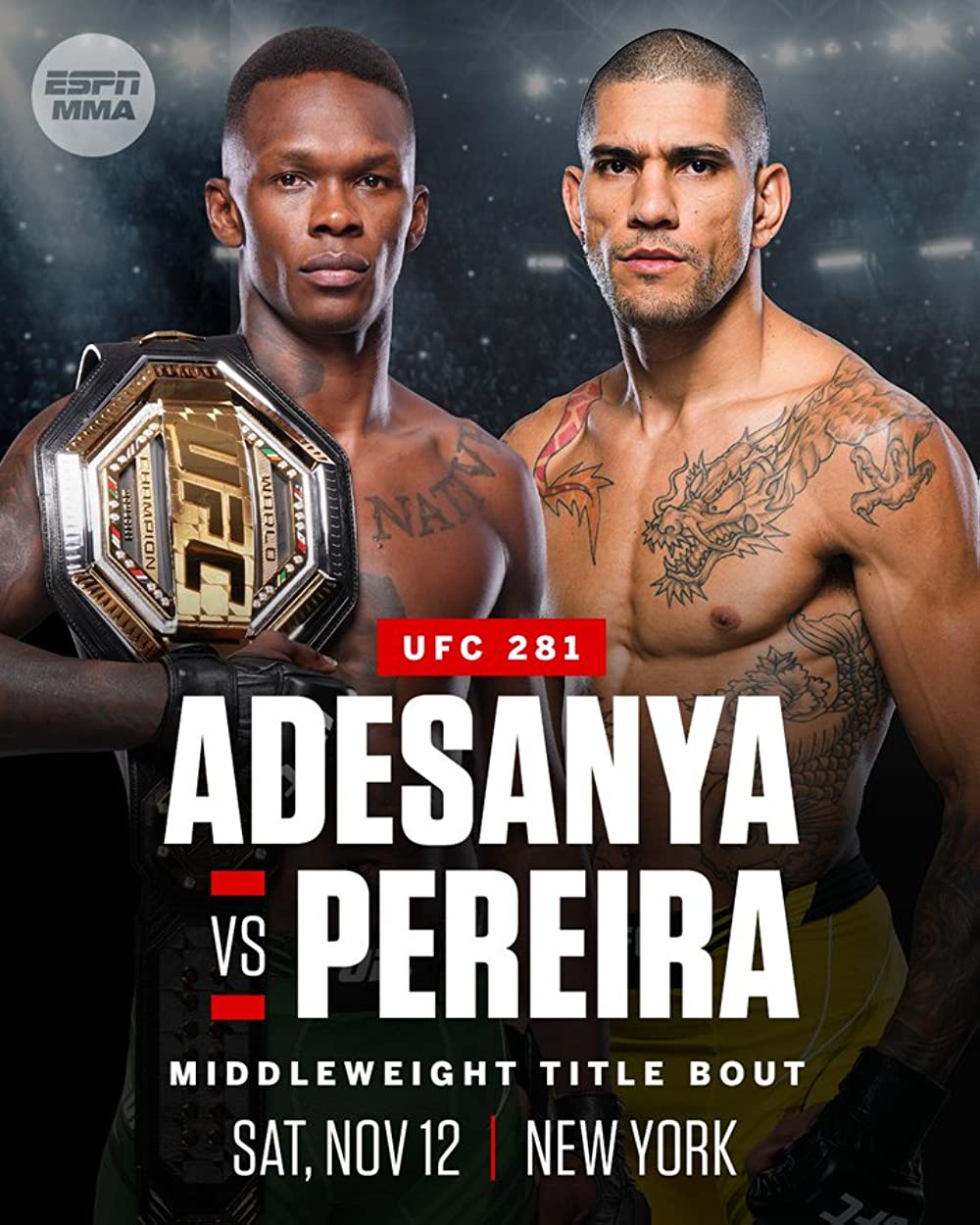 We get an exciting middleweight title fight matchup on Saturday night in New York City at UFC 281, as Israel Adesanya takes on Alex Pereira. This fight headlines a five-fight pay-per-view card that looks really good. Overall, there are 14 fights at UFC 281 with the preliminary card action on ESPN+, ESPNews and UFC Fight Pass. The fight between Adesanya and Pereira is for the UFC middleweight title, while the bout between Carla Esparza and Zhang Weili is for the UFC women’s strawweight title. Also, on the main card it is Dustin Poirier taking on Michael Chandler, Frankie Edgar vs. Chris Gutiérrez and Dan Hooker vs. Claudio Puelles.

The main event matchup should be exciting, as Adesanya is 23-1 in his career, including 4-1 in his last five fights. Normally Adesanya is all about dominating his opponents by winning unanimous decisions, as he beat Jared Cannonier in July, Robert Whittaker in February and Marvin Vettori in June of last year. His only defeat was a unanimous decision loss to Jan Błachowicz in March of last year.

Pereira is 6-1 in his career and unbeaten in the UFC. He is coming off a KO win against Sean Strickland in July. He won by unanimous decision against Bruno Silva in March and won by TKO against Andreas Michailidis in November of last year. It is all about finishing his opponents for Pereira.

If you have been reading about this fight then you may already know that Pereira has beaten Adesanya in the past in kickboxing and Pereira has been saying that he can beat Adesanya again in UFC action. That remains to be seen, but there is no question that Pereira is at least in the head of Adesanya. When was the last time you saw a fighter getting a title shot after just three UFC fights? And the odds on this fight are not outrageously high, as Adesanya is just under a 2-1 favorite. Oddsmakers are giving Pereira a real chance to win this fight. I think the underdog is worth a flyer in this fight and we can also hedge a little bit. Adesanya may just decide to be very cautious in this fight and not open himself up to any damage and that could result in a dull main event that goes to a decision. I’ll go over the rounds total at PointsBet in addition to taking a flyer on Pereira at plus money.

Weili is heavily favored in her bout against Esparza. There is a lot to like about Weili, as she continues to win fights. She is 22-3 overall and 6-2 in the UFC. The only fighter she hasn’t been able to beat in the UFC is Rose Namajunas who she lost to twice and one of those was by split decision. It is all about finishing for Weili, as she has 18 finishes in her career. Esparza is a good fighter, but not great. She is 19-6 overall and 10-4 in the UFC. She has a signature win, as she beat Namajunas by split decision. The one big difference is that Esparza does not have the power of Weili, with only eight finishes in her career.

I am not laying over 3-1 in the UFC very often and it sure won’t be here, as Esparza is a capable fighter. I think Weili is too much for Esparza but this price is too high for me. The rounds are interesting, as Weili seems to finish almost all of her opponents and keep in mind that this fight is scheduled for five rounds which makes taking the under more attractive. I’ll go under the rounds total in this fight.

Check out the latest UFC odds at PointsBet