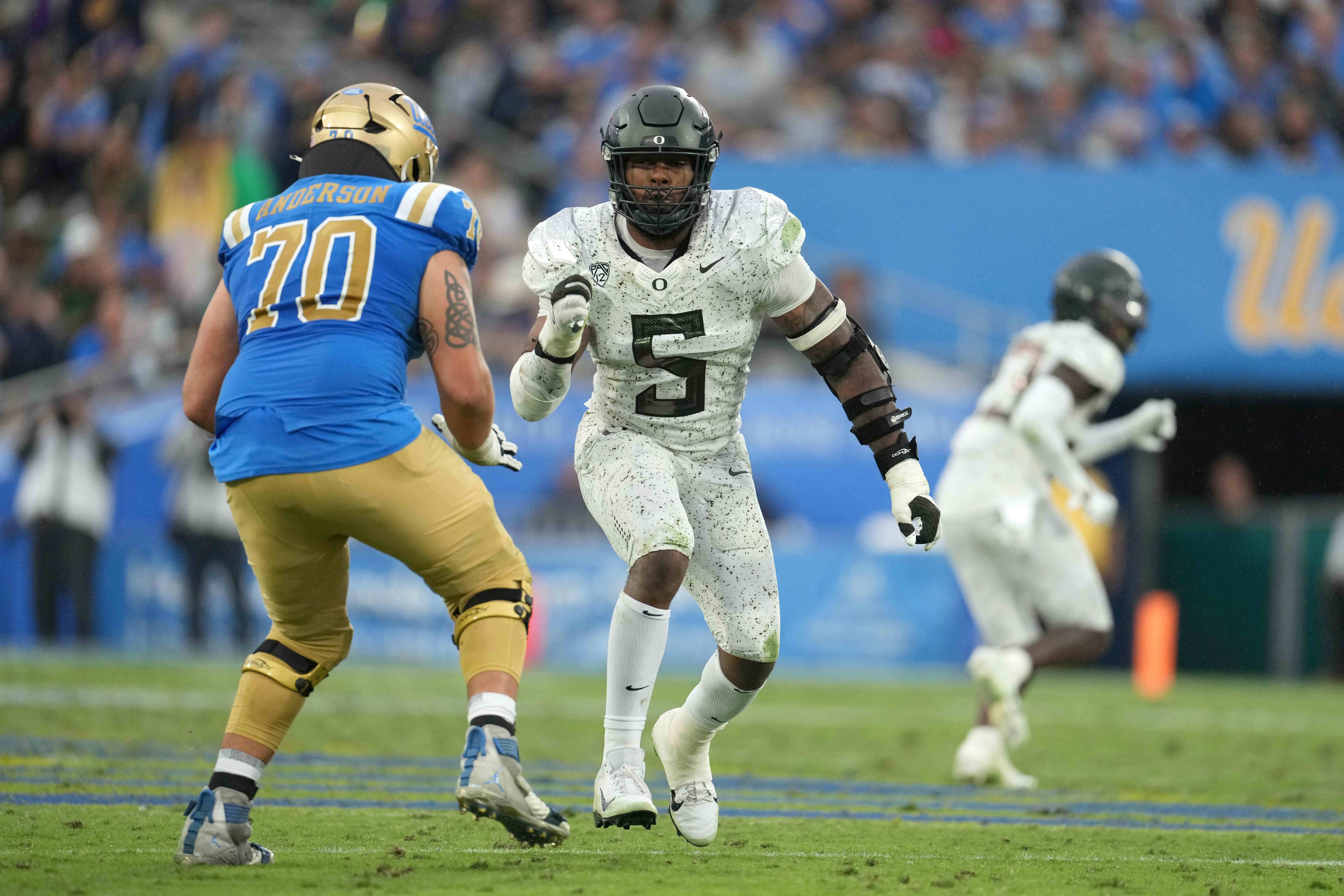 The college football season is coming to a close with rivalry weekend just around the corner. As teams wrap up their regular seasons, upperclassmen can begin to turn their attention to the next level in their playing careers.
This year’s NFL Draft class is talented particularly on the defensive side of the ball. Last year was a bit of the opposite with quarterbacks going to each of the first two teams. We may not see a quarterback taken until the tenth pick this year.
It seems that we’ll have some combination of Detroit, Houston, Jacksonville, and the New York Jets at the top of the draft order. Let’s take a look at the top five draft prospects on the board.


Thibodeaux has been college football’s best player and is unanimously considered to be its most talented. The EDGE rusher from Oregon has racked up six sacks and ten tackles for loss this year and will look to close out the regular season on a high note in his final meeting with Oregon State.
Thibodeaux burst onto the scene as the nation’s top high school recruit in 2019. He wrapped up his freshman season with nine sacks and has been producing at a high level ever since. He should see the best football odds to be selected with the first pick in the upcoming NFL Draft.

Another powerful EDGE rusher, Hutchinson has helped lead the Michigan Wolverines to a 10-1 overall record. His performance on the defensive line has given the program national title aspirations as they enter a rivalry game matchup versus Ohio State this weekend. A strong showing against one of college football’s biggest brands could help elevate Hutchinson’s draft stock even more.
Hutchinson has notched nine sacks and 11.5 tackles for loss this year. He made the right call returning to Ann Arbor for his senior season and should see the dividends begin to pay off with a top five selection.

Stingley has been a known commodity since his first season on campus for the LSU Tigers. The cornerback picked off six passes in that freshman year to help lead the program to a national championship.
His production has seen a dip since that stellar campaign but injuries have played a part. He’s played just ten games over the last two years after starting each of the Tigers’ 15 games in 2019. Luckily, the lack of playing time on the field shouldn’t hurt Stingley’s draft stock. His lockdown abilities and big play potential have solidified his status as a top five pick. He should be the first defensive back off the board in the 2022 NFL Draft.

The first offensive player on the board, Neal could be instrumental in stopping some of these opposing pass rushers listed ahead of him. The offensive tackle from Alabama has been a stalwart on the front line for the Crimson Tide each of the last three seasons.
Neal should filter right into a starting role possibly tasked with protecting a youngster at quarterback in New York or Jacksonville. It’s impressive how well the tackle moves at 6-foot-7, 350 pounds and he’ll be able to showcase those abilities at the professional level very, very soon. Barring someone taking a chance on one of the top quarterback prospects early, Neal should be locked in as the first offensive player off the board. He’ll play one of his final college football games this weekend versus Auburn.

Hamilton has been a ball hawking defender in the Notre Dame secondary for three seasons now. The safety has tallied eight interceptions during his time with the Fighting Irish, including having picked off three passes this year. He’s not afraid of contact, either, racking up 138 tackles over the course of his career, including 7.5 behind the line of scrimmage.
Hamilton has played 31 games in South Bend but this weekend’s matchup against Stanford should be his last collegiate contest. He will hear his name called early on in the upcoming draft and should factor into to someone’s starting secondary immediately.