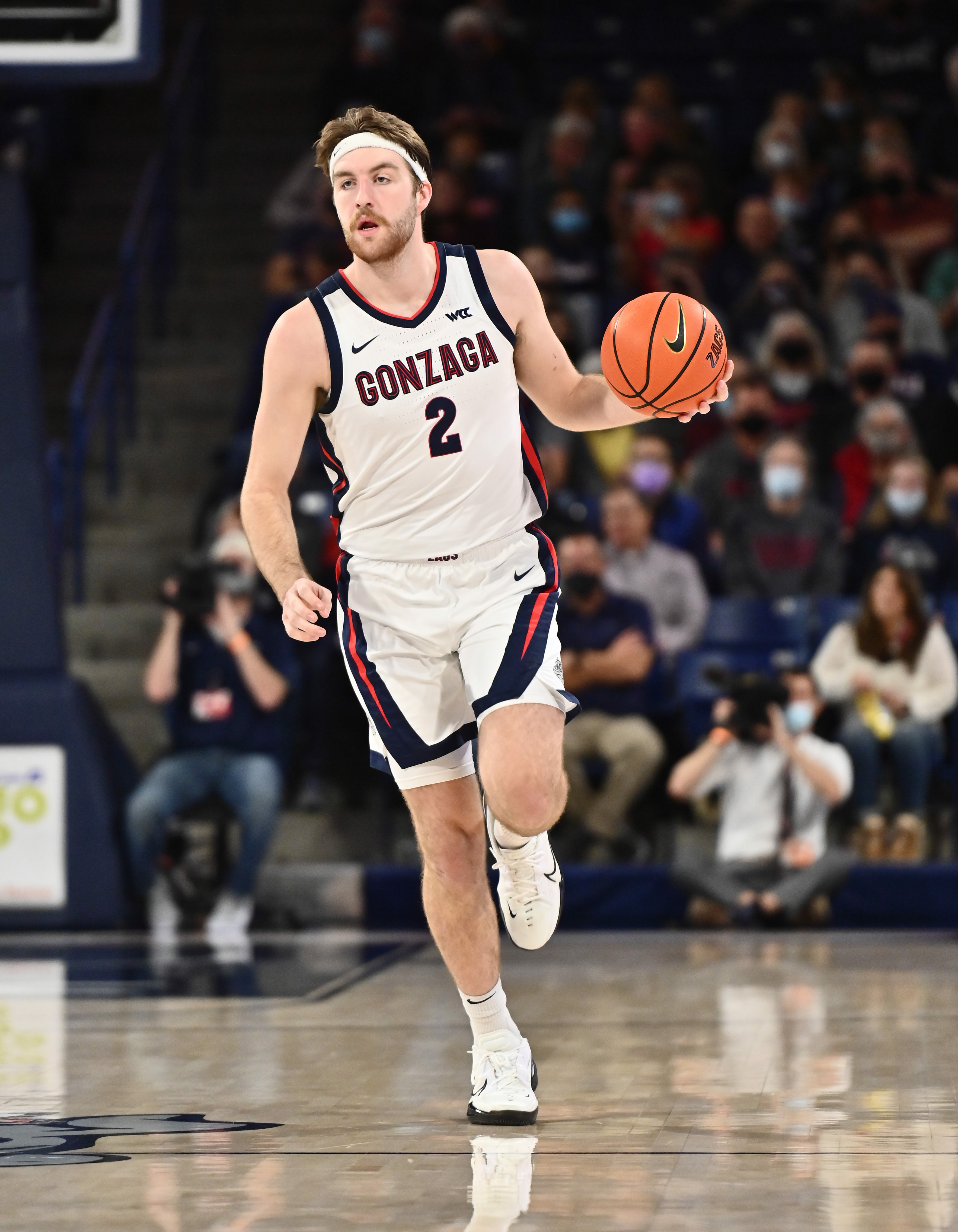 The college basketball season is just getting underway and we’ve got plenty of standouts ready to make their marks. Here, we rank the top 10 players entering the year which consists of a mix of youngsters and seasoned vets.
Gonzaga looks poised to take make another run back to the title game as they hope to bring home the school’s first national championship in the sport. They’re currently listed as the favorite to win it all at SugarHouse sportsbook, holding +650 odds.
Blue bloods Kentucky, UCLA, Kansas, and Duke are also near the top of the college basketball national championship odds, and they’ve all got the rosters to make it happen. You’ll see players from a handful of those programs on this list.
If you plan to bet on college basketball this year, be sure to keep track of these stars.

1. Drew Timme – Gonzaga
Timme returns for his junior season in Spokane as he hopes to lead the Bulldogs to another national title appearance. Last year, he was a consensus All-American, averaging 19 point per game. He’s picking up right where he left off in 2021 and has helped lead Gonzaga to victories over Alcorn State, Dixie State, and fifth-ranked Texas.
2. Johnny Juzang – UCLA
Juzang was a star in last year’s NCAA Tournament where he helped lead the Bruins to a Final Four appearance. He averaged 16 points a contest last year, and has seen that increase to 23 points per game as a junior. UCLA sits just behind Gonzaga in the latest college basketball odds with a 10/1 chance of bringing home the hardware.
3. Kofi Cockburn - Illinois
After toying with the idea of leaving Illinois, Cockburn returned to Champagne for his sophomore season. Last year, he averaged nearly a double-double at 13.3 points, 8.8 boards per game. Those totals have only increased to start the 2021-22 season, as he’s notching nearly 18-and-10 on a nightly basis. With Cockburn in the lineup, the Illini boast +2000 NCAAB championship odds at SugarHouse sportsbook.
4. Paolo Banchero – Duke
Banchero may only be a freshman but he’s already become a key part of the Blue Devil attack. The rookie is averaging 17 points and 8.5 rebounds a night to have Duke off to a 4-0 start in their first season without Coach K on the sidelines. Banchero holds +600 NCAA betting odds of winning Player of the Year, third most behind previously mentioned Timme and Juzang.
5. Trayce Jackson-Davis - Indiana
Jackson-Davis is trying his best to get Indiana back to glory. The third-year player is averaging 20 points per game so far on the young season, just a year after posting a mark of 19.1 points per contest in 2020-21. The All-Conference big man is also rebounding at a career-high rate, pulling in 10.5 boards a night. If he keeps this impressive performance up, the Hoosiers could surprise in the Big Ten.
6. EJ Liddell – Ohio State
Another impressive player from the Big Ten, Liddell is pacing the Buckeyes at 22.3 points per night through their first three contests. An All-Conference performer last season, he helped lead Ohio State to a No. 2 seed in the NCAA Tournament. He should stay atop the list in the battle for Big Ten Player of the Year.
7. Hunter Dickinson – Michigan
Dickinson was the Big Ten’s Rookie of the Year last season after posting totals of 14.1 points and 7.4 boards per game. He’s picking up where he left off in 2021-22, seeing increases in both categories through three matchups. The 7-foot big man is shooting an incredible 67% from the field and figures to play a huge role in the Wolverine’s success. Michigan has the second-best college basketball championship odds at SugarHouse sportsbook.
8. Mas Abmas – Oral Roberts
Abmas led the nation in scoring last season at 24.5 points per game. He’s looking to lead the Eagles back to the NCAA Tournament in 2021-22 after making a run to the Sweet Sixteen. With another solid season, Abmas can repeat as Summit Conference Player of the Year.
9. Buddy Boeheim – Syracuse
Boeheim proved to be one of the ACC’s top scoring threats last season during Syracuse’s trek to the Sweet Sixteen. The veteran has seen his point totals increase in each campaign, culminating with a 17.8-point mark in 2020-21. He’s on track to surpass that total as a senior, averaging 20.5 points a night on 40% shooting from beyond the arc.
10. Collin Gillespie – Villanova
Gillespie is in his fifth season with the Wildcats, taking advantage of his extra COVID year. A leader on the floor, the guard has posted marks of at least 14 points and 4.5 assists per game in each of the last two seasons. This year, he’s off to another hot start, seeing that point total increase to 17.8 a night while continuing to distribute the basketball to his teammates.