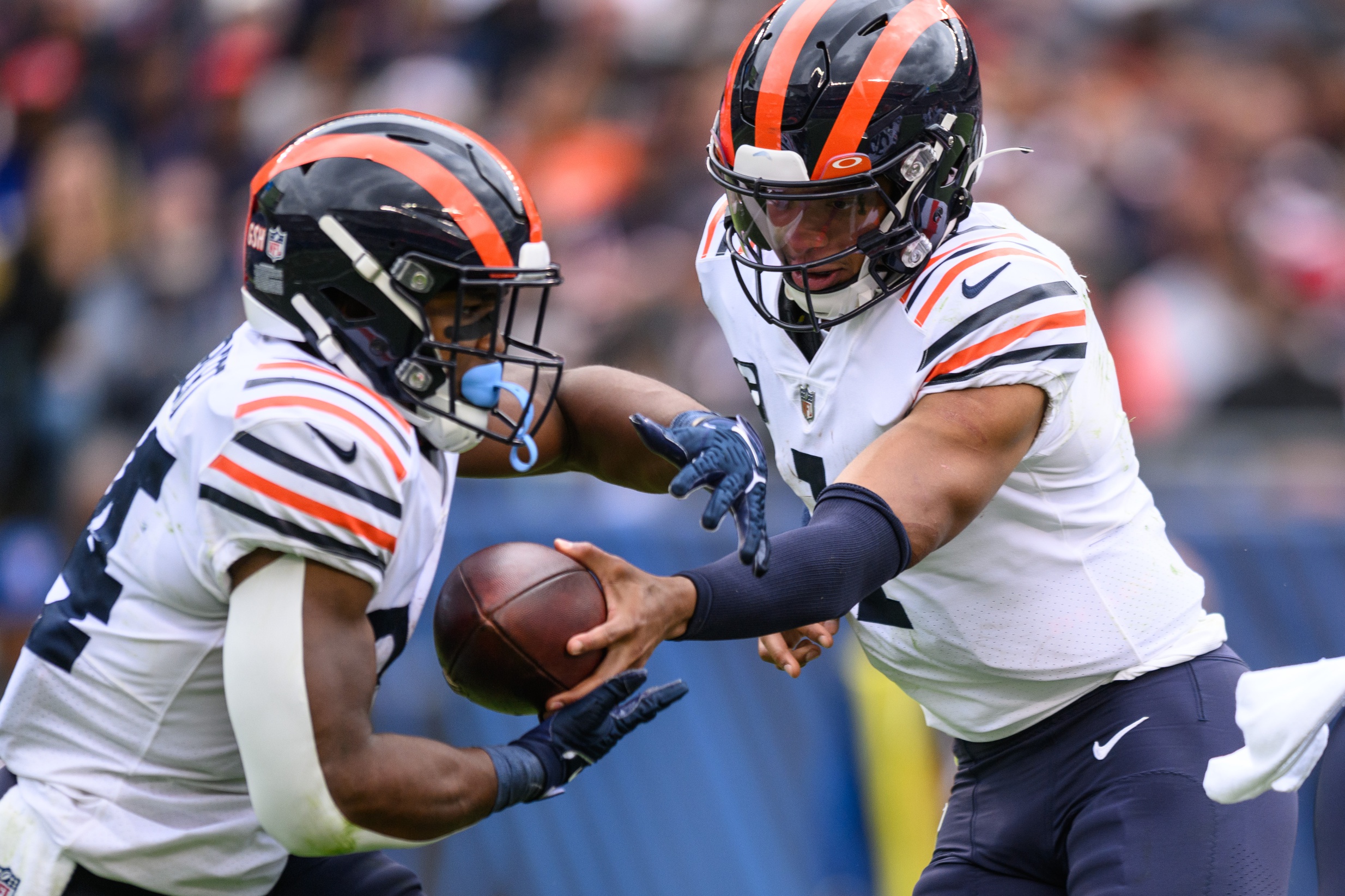 Don’t expect a lot of offense when the Chicago Bears host the Washington Commanders on Thursday Night Football this week. Justin Fields and Carson Wentz are two of the worst quarterbacks in the league, and that has led to the NFL betting odds dropping this total from 40 to 38 at BetRivers Sportsbook. This game shouldn’t be as low scoring as the dud we saw on TNF last week though, as these teams both turn the ball over a lot. Currently, this spread is a perfect pick ‘em with both teams listed at -107 to win this game.

Chicago throws the ball less than any other team in the NFL. The Bears run the ball on over 60% of their possessions, as they have the worst set of receivers in the league, and they don’t trust Fields. Khalil Herbert has been one of the most effective backs in the league so far this season, as he is averaging 5.9 YPC with three rushing touchdowns through five games. Herbert has been more explosive than David Montgomery (3.8 YPC), and he should receive the bulk of the carries on Thursday night.

Fields is coming off his best game of the season last week against Minnesota. He has really not thrown the ball much in this offense though, completing 49 of 88 passes (55.7%) for 679 yards with three touchdowns and four interceptions. The second-year quarterback out of Ohio State has been sacked 18 times and has fumbled four times despite his legs, and he is the second leading rusher with 4.6 YPC for the hosts.

Washington doesn’t have a great defense, but the Commanders can get after the quarterback. They have 14 sacks through five games, and former first-round picks Daron Payne, Jonathan Allen, and Montez Sweat are leading this unit with Chase Young out due to injury. The front seven has done a decent job stopping the run (allowing 4.2 YPC), but the Commanders have forced a league low one turnover through five games.

Wentz hasn’t posted poor numbers under center with Washington this year. He is completing 62.9% of his passes for 1,390 yards (6.6 YPA) with 10 touchdowns and six interceptions. However, the problem with Wentz is that he holds onto the ball way too long at times, and that has led to him being sacked 20 times although he is a mobile quarterback.

Terry McLaurin has been the top receiver for Washington since he was taken in the third round of the 2019 NFL Draft. McLaurin is averaging 17.2 YPR this season as the No. 1 option for Wentz. Curtis Samuel is on pace to have his best season yet, and he has 32 receptions for 281 yards and two touchdowns as the top underneath option on this team. If he suits up this week, Jahan Dotson is someone to watch too as a deep threat in this offense, but he is dealing with a hamstring injury that made him a no-go in Week 5.

The Commanders have had a lot of trouble running the ball with Antonio Gibson. Washington’s top running back is averaging just 3.2 YPC, and he hasn’t run for more than 60 yards in a game yet this season. This ground game ranks in the bottom five in the NFL, so that’s good news for a Chicago front seven that is surprisingly porous against the run.

This is not a Monsters of the Midway defense. The Bears are allowing 4.9 YPC and 170.0 YPG on the ground. Roquan Smith and Robert Quinn have not been the difference makers that they were in 2021, and the middle of the defense has been pushed around. The good news for Chicago is that this young secondary is very good, and the Bears could have a top five pass defense by the end of the season. Eddie Jackson should make his third Pro Bowl in six seasons later this year, and rookies Kyler Gordon and Jaquan Brisker have played very well early on.

Don’t be surprised if we see a lot of turnovers on Thursday night. That has the potential to make this a higher scoring game than the experts believe, making the Over the best bet on the board by the current football betting odds.