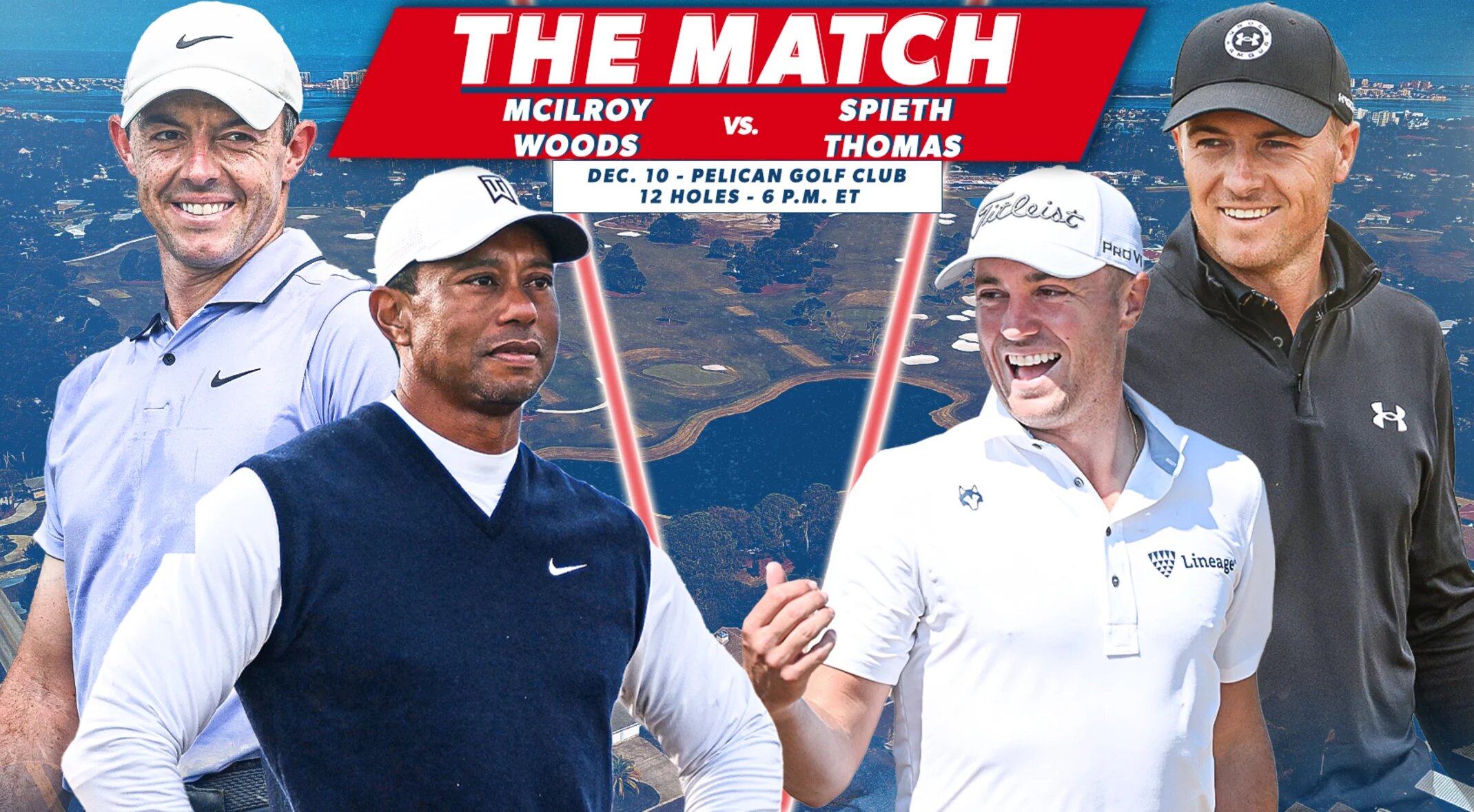 Four of the biggest names in golf will compete in the seventh edition of “The Match” as Rory McIlroy and Tiger Woods take on Justin Thomas and Jordan Spieth. The made-for-TV event will take place on Saturday, December 10 in Belleair, Florida and be shown on TNT. This event takes place at the Pelican Golf Club and since it has a tee time of 6 p.m. Eastern it will take place under the lights. Even though Woods is considered one of the greatest golfers of all-time and McIlroy is currently the No. 1 ranked player in the world, their team is a slight underdog in golf betting odds to Thomas and Spieth. Let’s look at the event and golf picks.

There is no question that if Tiger plays well that this team is likely to win. McIlroy is currently the best player in the world and he can outplay either Thomas or Spieth. The question mark is Woods who is dealing with foot pain. Tiger has said he can hit all the shots, but he just has trouble walking. The walking will be no issue in this event, as the players will be using carts.

We know that Thomas and Spieth are close friends and they have been partners in the past at the Ryder Cup and the Presidents Cup. The two went a perfect 4-0 as a team at the Presidents Cup. Perhaps the question with this team is the consistently of Spieth who has been known to get wild on occasion. If he has trouble with his tee shots it could spell trouble for this team. Spieth said he and Thomas are excited to play against Rory and Tiger. “If you told me and Justin back in 2012, when we were in school, that we’d be playing a match against those two, we’d say things have gone pretty well,” said Spieth to the media, “We’d be pretty excited to play with those guys. I don’t want to lose sight of that.”

Thomas expects the event to be entertaining. “I think we all are obviously very close,” Thomas said to the media, “and we have an opportunity to just honestly go out like we would us four, go play a practice round and have some kind of match. I'm sure it will be very entertaining. It's just going to be fun for us. Even if it wasn't on TV,” he continued, “us four would have a blast going out and playing 12 holes together, let alone under the lights at what sounds like a really cool golf course.”

This event probably come down to how well Tiger plays because we know the other four players are likely to be in top form. Based on what we have heard from Tiger, he seems to be in very good form. Some people are getting all excited about his foot pain, but Tiger has already said that the problem is walking, not in hitting shots. The advantage for Tiger is that he is in a familiar setting with three other players who he is very comfortable with. There is no question that the best player of the four right now is McIlroy who is ranked No. 1 in the world. When looking at a team event I like to focus in on the best player and in this case that is McIlroy. I expect that Tiger will play well enough for Rory to lead the team to a victory. I also don’t know that I trust Spieth to be consistent enough in this format. I know that Thomas and Spieth have done well as teammates in the past, but I still give the edge to McIlroy and Woods and we get them at a bargain price.

Check out the latest golf betting odds at PointsBet.