The Match: Champions For Charity – Tom Brady and Aaron Rodgers vs. Patrick Mahomes and Josh Allen 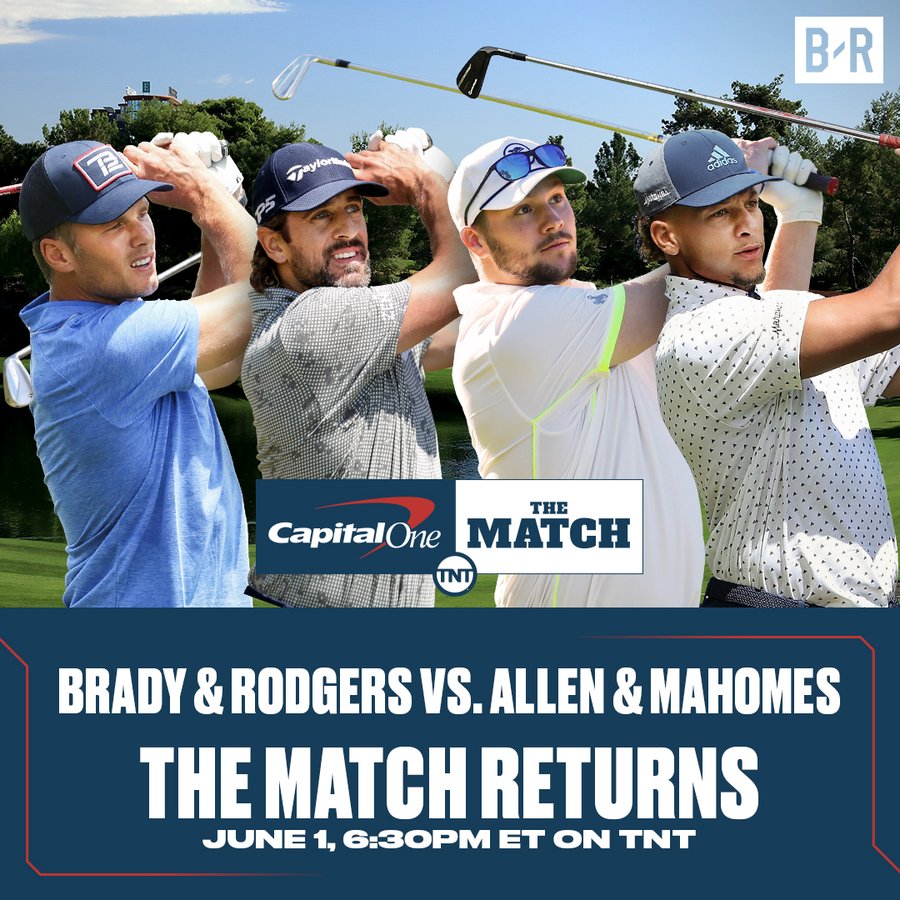 Four NFL superstars will take their talents from the gridiron to the golf course as they participate in this annual Champions for Charity event. Tom Brady of the Tampa Bay Bucs will team up with fellow NFC signal caller Aaron Rodgers. They’ll face off against a pair of AFC passers in Patrick Mahomes and Josh Allen.

For Brady and Rodgers, this is an event that they’re very familiar with. The two competed in last year’s match, though as competitors rather than teammates. Rodgers teamed up with PGA star Bryson DeChambeau while Brady paired with Phil Mickelson.

Brady also participated in the 2020 edition of The Match, again teaming up with Phil Mickelson.

For Allen and Mahomes, this will be their first entry into the field. Mahomes’s skills on the course have been evident. He and Chiefs teammate Travis Kelce won the 8AM Golf Invitational earlier this year, an event hosted by singer and performer Justin Timberlake. His passion for the game is well known, though his competitors in this particular event are still doubting his skills.

Allen is a bit more of a wildcard, though he was seen making an appearance on ESPN’s coverage of the PGA Championship in Southern Hills. Maybe he can surprise with his play on the course and help take down the seasoned vets.

This showdown should be highly entertaining, and even better, it supports a great cause. Let’s get to the action.

This will be the sixth edition of The Match. Not all formats or participants are the same. Some meetings consist of head-to-head matchups between PGA pros. Others boast NFL or NBA star power in a two-on-two setting.

Below are the results from the first five events.

Brady has posted an 0-2 mark in the event while Aaron Rodgers is 1-0 all-time. That lone win came in a head-to-head matchup against Brady last year.

This will be the first time in the tournament’s history that the field consists of four NFL players and no professional golfers.

Due to the past experience in the event, Tom Brady and Aaron Rodgers enter as the favorites. The duo boasts -200 odds at Sugar House Sportsbook. A $200 bet will win a $100 profit should Brady and Rodgers leave Nevada with a win.

Allen and Mahomes, on the other hand, come in as the slight underdogs. With +150 odds, there could be some value. And with Brady’s lack of success in the tournament thus far, paired with Mahomes’s golfing expertise, Allen and Mahomes might be receiving a bit of disrespect at the books.

If the line continues to favor Rodgers and Brady, a wager on the underdogs could prove profitable.

Brady and Rodgers are the favorites due to their past play in the event, though that experience has not necessarily led to success. The two have combined to go just 1-2 in previous matchups and that came with pro golfers at their sides.

Allen and Mahomes could be undervalued a bit here due to the lack of exposure in national golfing events. That is particularly true of Josh Allen. And with the odds at +150 for the underdog duo, the number is enticing enough to pull the trigger.

Mahomes is riding high off of his April victory in his last charity golf outing, and we’re expecting him to keep it going in The Match. Look for the young guns to take down the seasoned veterans. Brady and Rodgers might be the GOAT and the reigning MVP on the gridiron but Mahomes and Allen will outmatch the pair on the golf course.