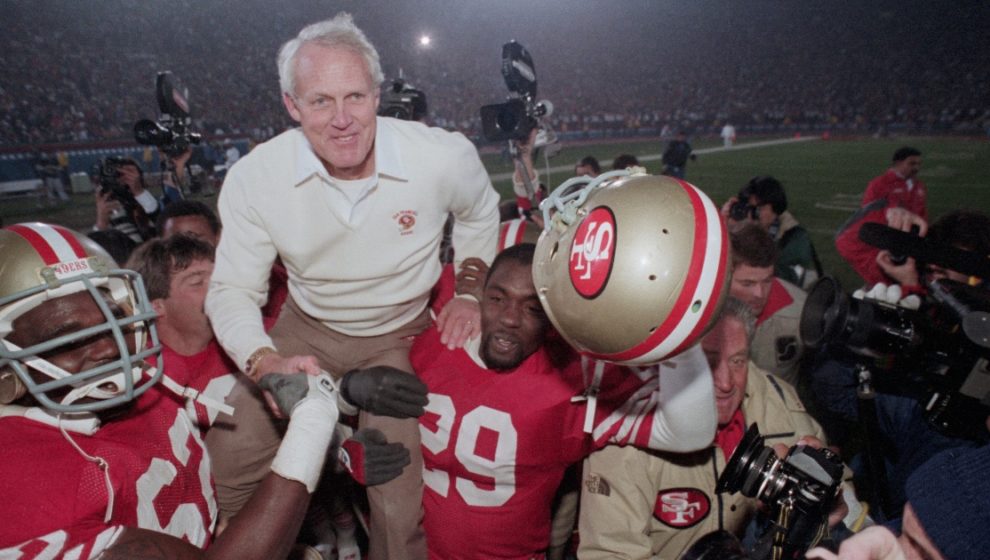 Once upon a time, the San Francisco 49ers were run by two little old ladies, Josephine and Jane Morabito, that had the franchise fall into their laps. There were some good times, especially three straight playoff appearances from 1970-72, but no Super Bowls and two heartbreaking losses to the Dallas Cowboys.

Known as “The Morabito Ladies,” the two sisters sold the team to real estate and shopping mall developer Ed DeBartolo Sr, who promptly gave the team to his brash young son Eddie as a business to keep him busy.

Eddie’s first 49ers teams flopped. And the press let him have it. Following a 2-14 season, he hired longtime NFL assistant and later Stanford University head coach Bill Walsh in 1979. That set into motion a football revolution and a dynasty.

Super Bowl Futures – A Crisis of Faith and Self Doubt

On November 16, 1980, Bill Walsh sat on a plane that had just taken off for San Francisco from Miami, where his team lost to the Dolphins 17-13. Following a 2-14 rookie season, Walsh was 3-8 in his second campaign. As the plane ascended, Walsh mentally prepared his resignation speech. He wept all the way home. He was an utterly defeated man. Can anyone say, “Welcome to the NFL?”

But Walsh was talked off the ledge, and the 49ers closed with three wins in their final five games.

In 1981 the 49ers were again decided underdogs with the Super Bowl Lines. San Francisco was touted for another losing season. But a deeper look shows that the 49ers were poised for a breakout. The offense was led by Joe Montana, a cool student of the game that didn’t have a rocket arm but was deadly accurate. On defense, Ronnie Lott developed into an All-Pro back and one of the greatest leaders in football history.

Walsh mastered the West Coast Offense, which he invented as the Bengals offensive coordinator. Walsh’s offense used short passes in place of rushes and continued to frustrate defenses. He was a talented play-caller that kept defenses on their toes.

San Francisco went 13-3 and defeated the Dallas Cowboys in the NFC Championship Game 27-26. It was then the biggest win in franchise history capped off by “The Catch;” Dwight Clark’s leaping grab in the back of the endzone from Joe Montana. The iconic grab wound up on the cover of Sports Illustrated.

Super Bowl XVI was sweet revenge for Walsh. His 49ers defeated the Cincinnati Bengals 26-21. Bengals owner Paul Brown passed up Walsh to replace him as head coach when he retired in 1976. Walsh was shattered at the decision and left. Brown then bad-mouthed Walsh to other NFL teams when jobs came open to punish him for leaving.

Following the win, Walsh was labeled “The Genius.” Although he pretended that he didn't like it, his friends and his son confided that he relished in it and enjoyed how it glorified his massive ego. It also helped Walsh with his frequent bouts of depression and insecurity that kept him driving.

In the years that followed, Walsh would win two more Super Bowls in 1984 and 1988. The 1984 team went 15-1 and rates as one of the greatest of all time. The 1988 team was on the brink of disaster. Walsh had a nervous breakdown after a loss at Phoenix and was nearly fired by DeBartolo. This came on the heels of a major upset loss to Minnesota in 1987 that damaged Walsh’s relationship with the owner.

Following a comeback Odds to win the Super Bowl victory in the final seconds over Cincinnati 20-16, Walsh retired on the brink of a mental breakdown. The 49ers won the Super Bowl the following season and again in 1994. Walsh’s stamp was still on those teams.

The Bill Walsh and Joe Montana 49ers rank among the greatest eras in NFL history. Walsh reinvented the game with his West Coast Offense. And the 49ers became a legacy franchise.