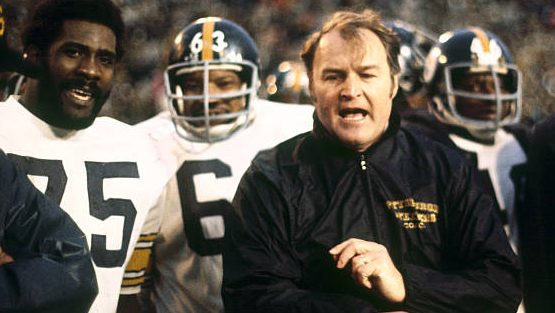 But for the Pittsburgh Steelers, their two back-to-back Super Bowl championships in six years forged the first true dynasty of the Super Bowl era. What has most ironic about the Steelers was that they were a sad-sack franchise up to that point. But the hiring of head coach Chuck Noll in 1969 proved to be the ultimate game-changer.

In 1933 Art Rooney bought the Pittsburgh NFL franchise with money that he won gambling on a horse racing parlay. Rooney became a civic leader and beloved figure in Pittsburgh. But his ownership did not produce championship football as much as he desperately wanted it to. The only playoff appearance from 1933 through 1971 was in 1947 when the Steelers lost in the divisional round. The Chief hired a series of bad coaches with earnest intentions. In 1969, he finally got it right with the hiring of Chuck Noll.

On the surface, Chuck Noll was no-nonsense and hard-nosed. He preached fundamentals and preparation. He was demanding and tolerated no mistakes. But Noll was not a screamer. Instead, he was stoic. Underneath that surface was a highly intelligent man that enjoyed a wide variety of interests outside of football.

In 1972 the Steelers hosted the powerful Oakland Raiders in their first playoff game in 25 years. Pittsburgh won 13-7 on a desperation Bradshaw pass that caromed off an Oakland defender into the hands of Franco Harris several yards away. Harris ran the ball in for the winning score. Subsequently, Steeler Mania took over the Town. By 1974 the Steelers were ready to reach the summit.

Odds to win the Super Bowl - The Chief Gets His Day

The Steelers defeated the outmanned Minnesota Vikings 16-6 in Super Bowl IX at the Sugar Bowl in New Orleans. The veteran Vikings were too old and slow. After the game, Art Rooney accepted the Lombardi Trophy and won over the country as he chewed on his cigar. At age 71, Rooney’s investment finally paid off.   The next year at Miami’s Orange Bowl, the Steelers beat the Cowboys 21-17 for their second championship.

After two years of retooling, the Steelers had a more dynamic offense for Super Bowl XIII in Miami, where they beat the Dallas Cowboys 35-31. The following year at the Rose Bowl in Pasadena, Pittsburgh held off the Los Angeles Rams 31-19. It was their fourth world championship in six years.

The Chuck Noll and Terry Bradshaw era Steelers may well be the greatest team of all time. Pittsburgh had everything and could beat opponents by any method necessary.

The Steelers’ level of excellence over those six years can only be compared to Bill Belichick’s New England Patriots, who won three Super Bowls from 2001-2004, and then three more from 2014-2018.