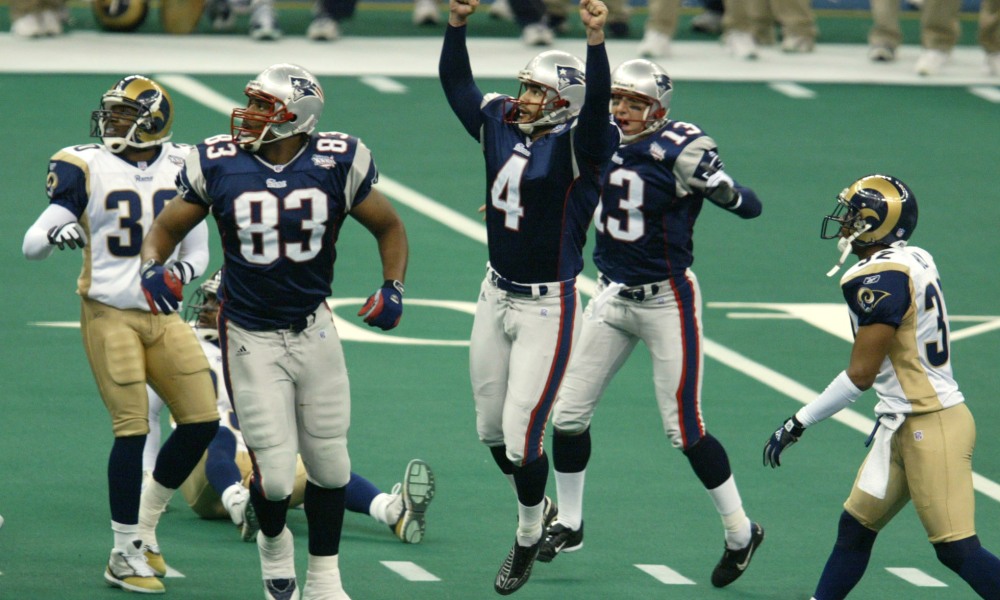 Our look back on the greatest plays in Super Bowl history starts with One More Moment for the Masters on Super Bowl XXIII.

An emotionally shattered Bill Walsh was coaching his final game for the San Francisco 49ers. The 49ers trailed 16-13 and were stuck on their 8-yard line with only 3:10 remaining in the game. But quarterback Joe “Cool” Montana led one of the greatest drives in football history and took San Francisco to the Cincinnati 10-yard line. With 39 seconds remaining, Montana looked first for Roger Craig, who was double-covered. But Montana saw John Taylor break free and hit him for the game-winning touchdown to send Walsh out a winner and into the Hall of Fame, where Montana would join him a few years later.

The 2021 NFL Playoffs have shown, once and for all, the value of a clutch kicker. But Adam Vinatieri was among the most memorable clutch kickers in NFL history. In Super Bowl XXXVI, Vinatieri lined up for a 48-yard attempt to break a 17-17 tie against the Rams. In one of the most epic moments ever, Vinatieri launched a rocket that zoomed far above and past the goal post for the Patriots' first Super Bowl championship. It was the beginning of the Bill Belichick and Tom Brady New England dynasty.

With six seconds remaining, the Tennessee Titans trailed the St. Louis Rams 23-16 in Super Bowl XXXIV but had the ball on the Rams 10-yard line. There was time for one more play. Titans quarterback Steve McNair hit Kevin Dyson at the 3, but Dyson was tackled just short of paydirt by Rams linebacker Mike Jones!

In Super Bowl XIV, the underdog Los Angeles Rams were set to pull off one of the great upsets against the Pittsburgh Steelers. Pittsburgh trailed 19-17 early in the fourth quarter before Terry Bradshaw hit John Stallworth on a spectacular 73-yard touchdown pass to break LA’s back and clinch the Steelers’ fourth Super Bowl title in six years.

In Super Bowl XVI, the San Francisco 49ers led the Cincinnati Bengals 20-7 in the third quarter. But the Bengals had a glorious opportunity to get within six points with first and goal inside the San Francisco 3-yard line. San Francisco linebacker Dan Bunz was the hero with a stunning tackle on a Bengals swing pass on 3rd down. The goal-line stand was the difference in a 26-21 San Francisco win.

In Super Bowl VI, the Dallas Cowboys faced the Miami Dolphins and a lot of painful history. Dallas was derided as “Next Year’s Team” based on their annual postseason heartbreaks. But on this day, the Cowboys destroyed Miami 24-3. The play of the game was a 29-yard sack by Dallas lineman Bob Lilly on scrambling Miami quarterback Bob Griese.

Like the Dallas Cowboys, the Oakland Raiders had a series of painful postseason failures. But in Super Bowl XI, the Raiders were unbeatable in a 32-14 win over the aging Minnesota Vikings. The highlight of the game was a 76-yard pick-six by Raiders’ cornerback Willie Brown. As Brown was heading to the end zone, Raiders’ radio man Bill King screamed, “He’s going all the way! Old Man Willie! Touchdown Raiders!” NFL Films caught the iconic return in mesmerizing fashion with Brown running right towards the end zone camera.

The Miami Dolphins led the Washington Redskins 14-0 in the fourth quarter in a boring Super Bowl VII. But tiny kicker Garo Yepremian, a tie-maker in the offseason, had his field goal attempt blocked back to him. Garo batted the ball into the air, and Mike Bass returned it for a TD to close the gap to 14-7. Fortunately for Miami, the Dolphins held on and clinched their first Super Bowl title and the NFL’s only perfect season.