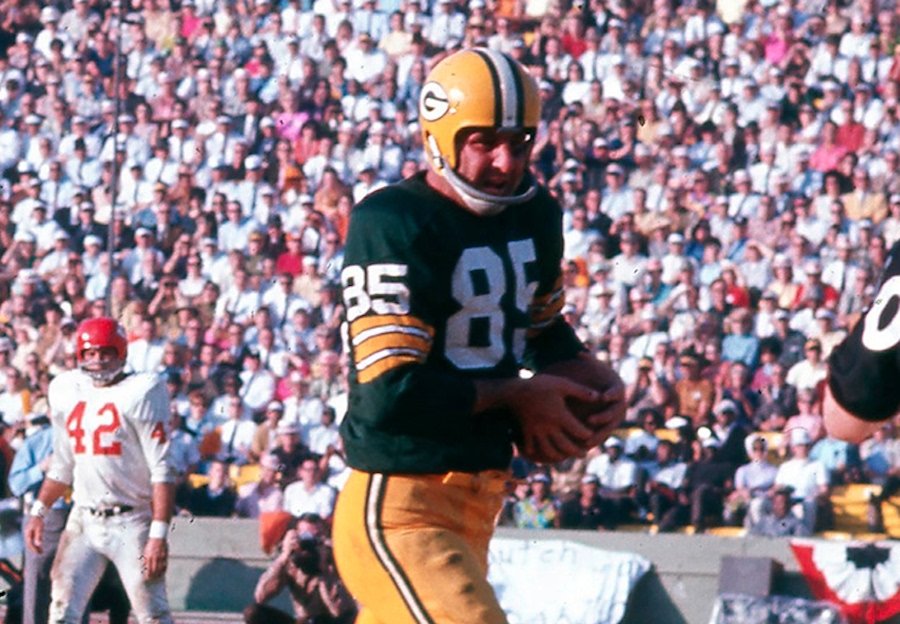 As we take our first of two looks at the greatest plays in Super Bowl history, we begin with a moment instead of a play.

That moment eternally frozen in time is New York Jets quarterback Joe Namath swaggering off the field with his right index finger waving in the air. It was Namath’s iconic way to say “We’re Number One” after the Jets beat the Baltimore Colts 16-7 as 18-point underdogs in Super Bowl III. Namath and the Jets pulled off the greatest upset in pro football history just days after Broadway Joe guaranteed victory in the face of howling and doubting experts. With that win, the disrespected American Football League drew blood against perceived National Football League superiority and gained credibility for the merger between the leagues.

In Super Bowl I, Green Bay Packers reserve wide receiver Max McGee didn’t expect to play against the Kansas City Chiefs. And he didn’t expect head coach Vince Lombardi to catch him breaking curfew on the night before the game. McGee was hungover after an all-night party with a group of stewardesses. But when Boyd Dowler was knocked out of the game early, Lombardi screamed, “MAX, MAX!” McGee forgot where he put his helmet and borrowed one before heading into the action. He then made history with a spectacular behind-the-back one-hand grab, running the rest of the way for the first touchdown (37 yards) in Super Bowl history. Later, he scored another TD with an incredible juggling circus catch etched into history.

In Super Bowl IV, the Kansas City Chiefs focused on short passes to neutralize the Minnesota Vikings and their ferocious “Four Norsemen” pass rush. In the game's pivotal play, Chiefs quarterback Len Dawson hit Otis Taylor with a short hitch to the outside. Taylor broke one tackle, juked past another, and galloped to glory with a back-breaking 48-yard touchdown catch to put the Chiefs ahead 23-7, which was the final score. With that TD, the American Football League and the Chiefs earned full redemption and equality for the upcoming AFL-NFL merger the following season.

Super Bowl V was an error-filled game between the Baltimore Colts and Dallas Cowboys. Following a Baltimore interception that caromed off the hands of Dallas running back Dan Reeves, the Colts were in field goal range. Rookie Jim O’Brien soon lined up for the 32-yarder to break a 13-13 tie. O’Brien nailed the field goal to become immortalized in Super Bowl history as an entire nation watched. Just as memorable was a few moments later when Dallas Hall of Fame defensive lineman Bob Lilly hurled his helmet high into the sky in frustration.

Super Bowl X was the first truly good game of the series, and much of the reason goes to Pittsburgh wide receiver Lynn Swann. The play of the game was a 53-yard gain on a pass from Terry Bradshaw to Swann, who made a spectacular leaping and juggling grab that required impeccable concentration. Swann was named Super Bowl Most Valuable Player for his efforts that sparked the Steelers to glory.

Odds to win the Super Bowl – The Diesel Runs Over Fish

In Super Bowl XVII, the Washington Redskins and Miami Dolphins were in an entertaining duel. Miami led 17-13 with 10:10 remaining in the game. Washington faced a 4th-and-1 at midfield. Head coach Joe Gibbs decided to go for it and, out of the I-formation, running back John Riggins took the handoff and, freed by a great block by Rick Walker, took it all the way to spark a 27-17 Washington win.

At Super Bowl XXV between the New York Giants and Buffalo Bills, the tension of war was in the air. The United States would enter the Gulf War a few days later, and security was tight, as was the tension. But the late great Whitney Houston blew the lid off of it all with her rendition of the national anthem, bringing millions of fans to tears. Giants head coach Bill Parcells, the toughest guy in the ballpark, admitted how Houston’s performance got to and inspired him. Buffalo’s Scott Norwood missed a 48-yarder at the gun to give Parcells and Big Blue the title. But Whitney Houston provided the most iconic moment.