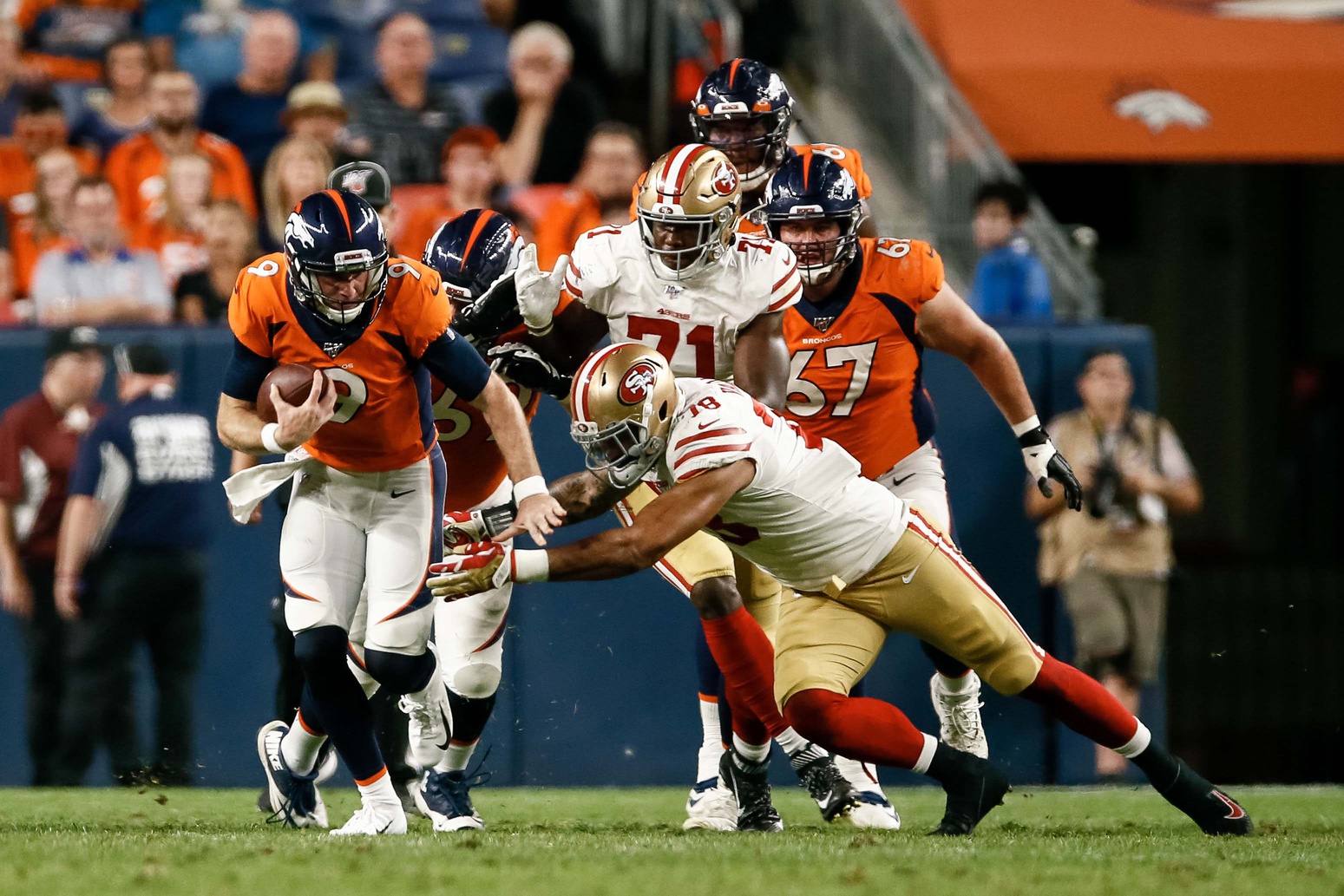 The Broncos will host the 49ers on Sunday night as both teams look to move to 2-1 on the year. Neither team has played to expectation thus far, with each suffering season-opening upsets before rebounding in Week 2. Now, they’ll look to stay on track in primetime on Sunday night.

Denver opened the year with high hopes following the addition of Russell Wilson under center. Those hopes have since come crashing back down to earth with a Week 1 loss to Wilson’s former team in Seattle, followed by a pedestrian performance in a 16-9 win last Sunday against the Texans. The offense will look to turn things around against San Francisco this weekend.

Speaking of those 49ers, they fell to the Bears in their season opener, which took place in a monsoon in Chicago. There was more bad news to follow in Week 2 as starting quarterback Trey Lance went down with a season-ending injury. Last year’s starter Jimmy Garoppolo will now take over under center as he looks to lead the Niners to a second straight win.

Which of these potential playoff contenders will make a statement in Week 3?

Denver’s offense has been an issue thus far. In Week 1, they moved the ball with ease, totaling 433 yards against the Seahawks, but a pair of fumbles on the goal line led to a 17-16 defeat. In Week 2, the unit was better at protecting the ball, though Russell Wilson did throw a pick, but they still only managed 16 points and one touchdown.

On defense, they’ve been solid. The Broncos have allowed just 12.5 points per game while holding both of their opponents to less than 255 total yards. They’ll now face a 49ers offense that’s a bit in flux after dealing with injuries at both quarterback and running back over the first two weeks of the season.

Speaking of San Francisco, it could be a blessing to see Jimmy Garoppolo back under center. The team had committed itself to Trey Lance, but after a pair of underwhelming performances, a new (and old) face could be welcomed. Jimmy G threw for 154 yards and a score in limited action on Sunday. He also ran for a score and will look to continue that success in Denver.

On defense, the Niners were stout last weekend, allowing seven points to the Seahawks. They gave up just 216 yards, a week after holding the Bears to 204 yards in a season-opening slugfest. With the play of both defenses shining thus far, we could be in for a low-scoring Week 3 affair.

Despite playing on the road, it’s San Francisco that enters as the favorite with the line currently sitting at -2 in favor of the Niners. The home team, Denver, enters as a two-point underdog while boasting +107 money line odds. The point total is set at 44.5 points.

These two teams haven’t met since 2018, a 20-14 San Francisco win. With the changes at quarterback, those past results can likely be thrown out the window. Instead, we’ll look to the performance thus far when looking at the odds.

Neither of these teams have seen a total eclipse the 35-point mark, so it’s surprising to see the line for this contest being set so high at 44.5 points. The Broncos have found themselves in a pair of defensive battles, with the average score of their matchups coming out to a 16-13 win. For San Francisco, they were able to put some points on the board last weekend in a 27-7 rout of Seattle, but their two games have totaled 29 and 34 points, respectively.

Denver thus far is 0-2 ATS after entering both of their matchups as heavy favorites. San Francisco landed its first win against the spread last week and now boasts a 1-1 ATS mark both overall and as a favorite.

Wide receiver Jerry Jeudy is dealing with injury and is questionable for Sunday’s matchup. Defenders Patrick Surtain II and Randy Gregory are also listed as questionable.

Trey Lance, Elijah Mitchell, and Tyrion Davis-Price are all out for Week 3, while Arik Armstead and George Kittle are listed as questionable.

This expects to be a tight game judging by the two-point spread. Both teams have questions on offense, which makes me lean towards the under when looking at the point total. I also believe that Russell Wilson will finally get things going at home this weekend, pulling out his first big win in Denver.

Back the Broncos in an upset.