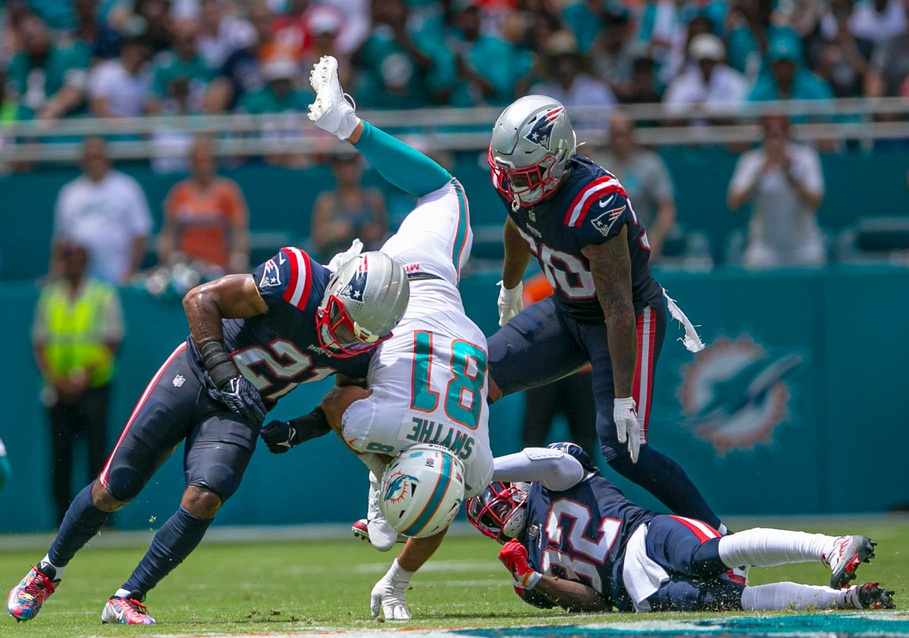 We finally got one! Unfortunately, we ended up dropping the other two to incur yet another losing week betting totals in the NFL. Never in my wet and wildest did I foresee the Carolina Panthers running roughshod upon what had been a dramatically improved Detroit Lions run defense. Because of it, the combined score raced passed the O/U with ease. A concussed Tua Tagovailoa was enough to prevent us from cashing that over ticket in the Green Bay/Miami game even though 33 points hit the board in the first half. That was a tough beat! Fortunately, we cashed a ticket on the under of the Atlanta/Baltimore game to avoid another goose egg performance at BetRivers Sportsbook. Here’s three more fades for Week 17!

It doesn’t get any bigger for the Dolphins and Patriots with the loser all but eliminated from playoff contention. Miami currently holds the seventh and final open playoff seed in the AFC playoff chase heading into this crucial matchup sitting a single game ahead of the Patriots, Jets, Titans, and Steelers. Lose it, and it will be darn near close to impossible for Mike McDaniel’s squad to get back in it should a loss be incurred. New England has nobody to blame but itself for getting into this predicament after blowing games against the Raiders and Bengals over the last two weeks.

This rivalry has been of the lower scoring variety the last handful of seasons with the teams playing to the under in seven of the last 10 overall meetings. The first meeting failed to surpass the 46.5 point impost with Miami going on to log the 20-7 win and cover as field goal favorites in Week 1. With the added pressure for both teams needing to win at all costs, I expect each to play it close to the vest. Teddy Bridgewater getting the start over Tua also eliminates some of the Fins explosiveness downfield. Look for the defenses to reign supreme and keep scoring to a minimum throughout. Under 20.5 in the first half is also a bet!

Will the Bears hit Motown looking to play the role of spoiler, or will they compete for a half and shut it down knowing full well a win does nothing but put it in jeopardy of tanking draft stock. The Lions on the other hand must win this game in order to keep its hat in the ring for either of the two open playoff seeds in the NFC. After getting their clocks cleaned in Carolina last week, I fully expect Jared Goff and his mates to hit the ground running right from the outset. Even in defeat last week, the offense was still able to flourish and I expect it to pick right back up where it left off.

When these teams collided at Soldier Field back in Week 10, the Lions battled back from a 24-10 fourth quarter deficit to log the impressive 31-30 come-from-behind victory as field goal underdogs. The game total closed 48.5. Detroit racked up 323 yards of total offense while Chicago went for 408. Amon-Ra St. Brown ripped Chicago’s secondary for 119 yards while Justin Fields went HAM on the ground for 147 yards and a pair of touchdowns. The Bears pass defense has only given up 669 passing yards over the last four weeks, but has also tallied a near league-worst 20 percent pressure rate during that stretch. The Lions passing attack is in for a big showing! Sprinkle some action on the 1H over 26 as well just in case Chicago packs it in over the final 30.

I’ll go on record here and state this is exactly the type of game the Cleveland Browns can and likely will win. Having already been bounced from postseason contention, all the pressure falls upon the shoulders of the Commanders who currently hold the seventh seed in the NFC with the Seahawks, Lions, and Packers breathing down their necks. I’m not a fan of Ron Rivera making the move to Carson Wentz with two weeks remaining knowing full well it was Taylor Heinicke that helped lead this team out of the depths of hell to become playoff viable. It’s a lateral move in my eyes and believe it will bite them where it hurts the most when all is said and done.

Though the Browns leaky run defense is likely to take a beating from Brian Robinson Jr. and whoever else gets their hands on the ball in the backfield, I’ll pay up to see if Wentz can turn that yardage into points that pushes the combined score over the number. Washington ranks No. 20 in touchdown red zone scoring percentage, and the strength of Cleveland’s defense comes in the secondary. It doesn’t look like the switch will get flipped for Deshaun Watson this season. This has ugly defensive grinder written all over it, and I’m here to see it play out as such 100 percent!