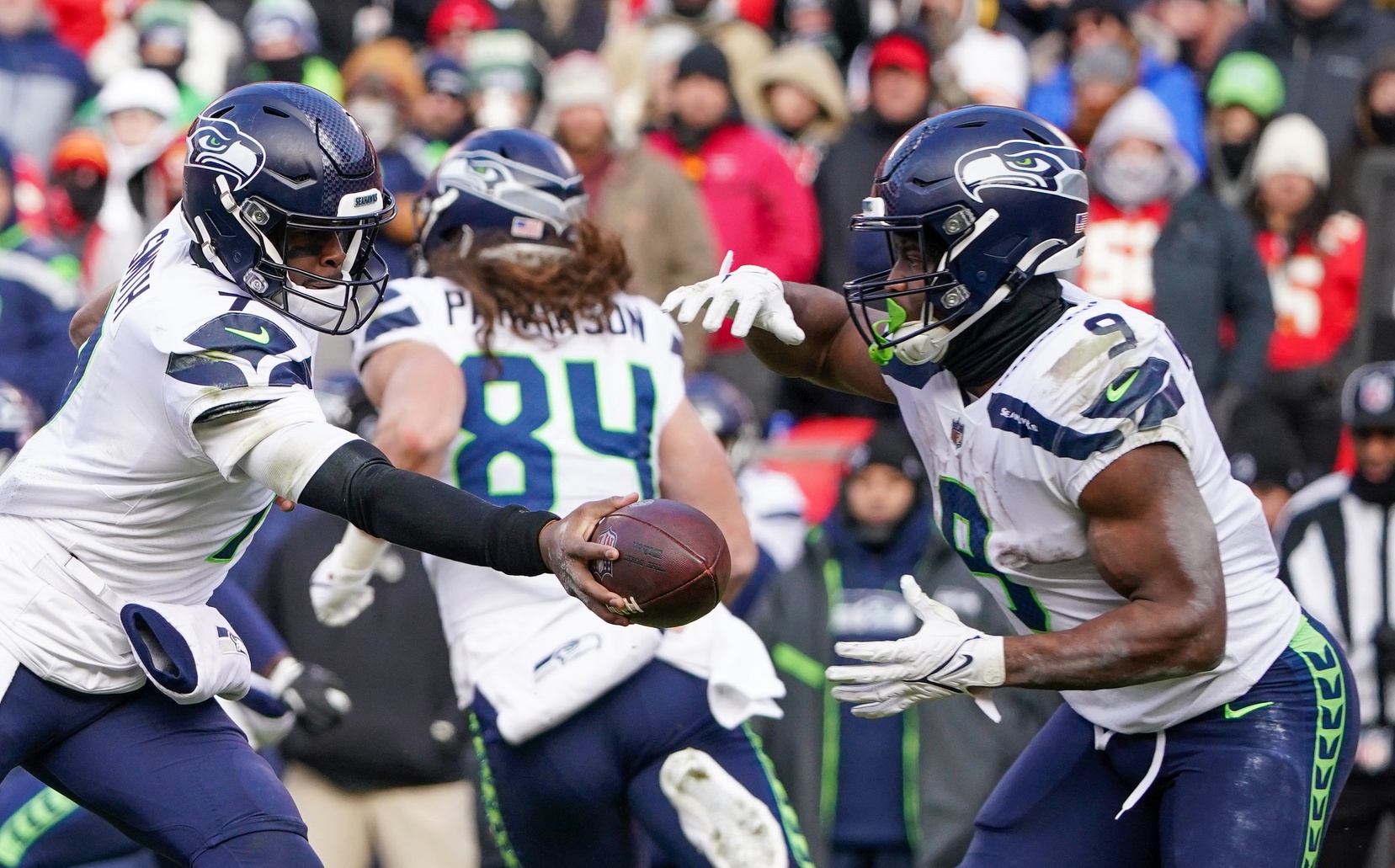 Wild-Card Weekend kicks off at PointsBet Sportsbook on Saturday with a pair of matchups that saw all four teams run up against each other during the regular season. The San Francisco 49ers swept the season rivalry from the Seattle Seahawks, while the Jacksonville Jaguars went into SoFi Stadium in week 3 and handed the Los Angeles Chargers an embarrassing 38-10 defeat as 6.5-point road dogs per the closing NFL odds. So should we automatically advance the Niners and Jags into the Division Round? Here’s my take on how both games play out.

The San Francisco 49ers hit the board as decided 10-point favorites to take a third straight from their division rivals. With San Francisco winning both regular season meetings by an average of 14 points per game, NFL bettors have flocked to the betting window to lay the points with San Fran taking in 75 percent of the bets and 68 percent of the money. Even so, the number to beat has fallen a half-point to -9.5.

Though Geno Smith will be making his first playoff start, he’s a veteran that’s been in the league nine years. He’s roamed the sideline with teams in the playoffs and knows about the preparation and pressure that comes with making a playoff start. The same can’t and won’t be said of 49ers rookie quarterback Brock Purdy who will be making the sixth start of his professional career.

Kyle Shanahan is an extremely conservative coach by nature - especially come playoff time. Anyone remember what happened after punting early in the fourth quarter in Rams territory during the NFC title game last year? I expect him to take as much pressure off his young quarterback as possible by running the ball ad nauseum. It makes perfect to do so with the Niners racking up 359 total yards on the ground against the Seahawks No. 18 run D.

Weather is expected to play a huge role in the outcome of this game with a steady downpour expected. While 7-1 SU when installed 9-10 point favorites under Shanny’s watch regardless of venue, the Niners only covered twice and won by an average of just 6.6 points when both blowouts are taken out of the equation. Pete Carroll is 3-2 SU and ATS in Silicon Valley which includes going 2-1 SU and ATS when taking back points. Familiarity, Shanahan’s conservative ways, Mother Nature, and the Seahawks looking to avoid dropping three straight to a division rival in the same season has me siding with the visitors plus the points.

The Jacksonville Jaguars made me a mint this NFL betting season by racing back to steal the AFC South title away from the Tennessee Titans. They also cashed the over of their seasons wins total to bolster my bankroll even more! The team enters the playoffs sky-high after coming out victorious in five straight to seal the deal. On top of all that, they’ve also got a win in the bag against the Chargers after going into Cali and handing them a 28 point defeat way back in week 3. Keep in mind Justin Herbert was a game removed from busting his ribs up in that one.

So why the heck is the betting market lining up in droves to fade Doug Pederson’s squad in the wild-card round? Jacksonville’s only received 32 percent of the bets and 21 percent of the money. Could it have something to do with it being Trevor Lawrence’s first playoff start? News flash, this is Herbert’s first start of the second season as well! Then it’s got to be the X’s and O’s with LA’s passing attack likely to make minced meat of a Jags secondary that got away with sucking due to running up against the wretched passing attacks of the Titans (twice), Texans, and Jets throughout the end-season win streak.

As much as LA’s porous run D bothers me, I lean to the latter and will pay up to see if Travis Etienne and co. can take advantage of it fully. While Brandon Staley has received tons of guff from the talking heads about playing his starters deep into last week’s meaningless game in Denver, Mike Williams, Joey Bosa, and Kenneth Murray Jr. are said to be no worse for the wear and will be suited up and ready to go for this matchup.

While it pains me to fade one of my biggest money trains from the regular season, it simply just isn’t the Jaguars time. I’ve loved the way the Bolts have looked in recent weeks with it the healthiest it’s been since the first month of the season. Herbert and Keenan Allen should have themselves a good ‘ol time picking on this Jags secondary, and the defense had only given up an average of 11 points per game up until surprisingly serving up 31 to the Broncos last week.

I think Los Angeles is underpriced in this spot. We’ll be backing Austin Ekeler and his mates on the moneyline in Arrowhead next week as well, so take a flier on their odds to win the AFC if you haven’t already!