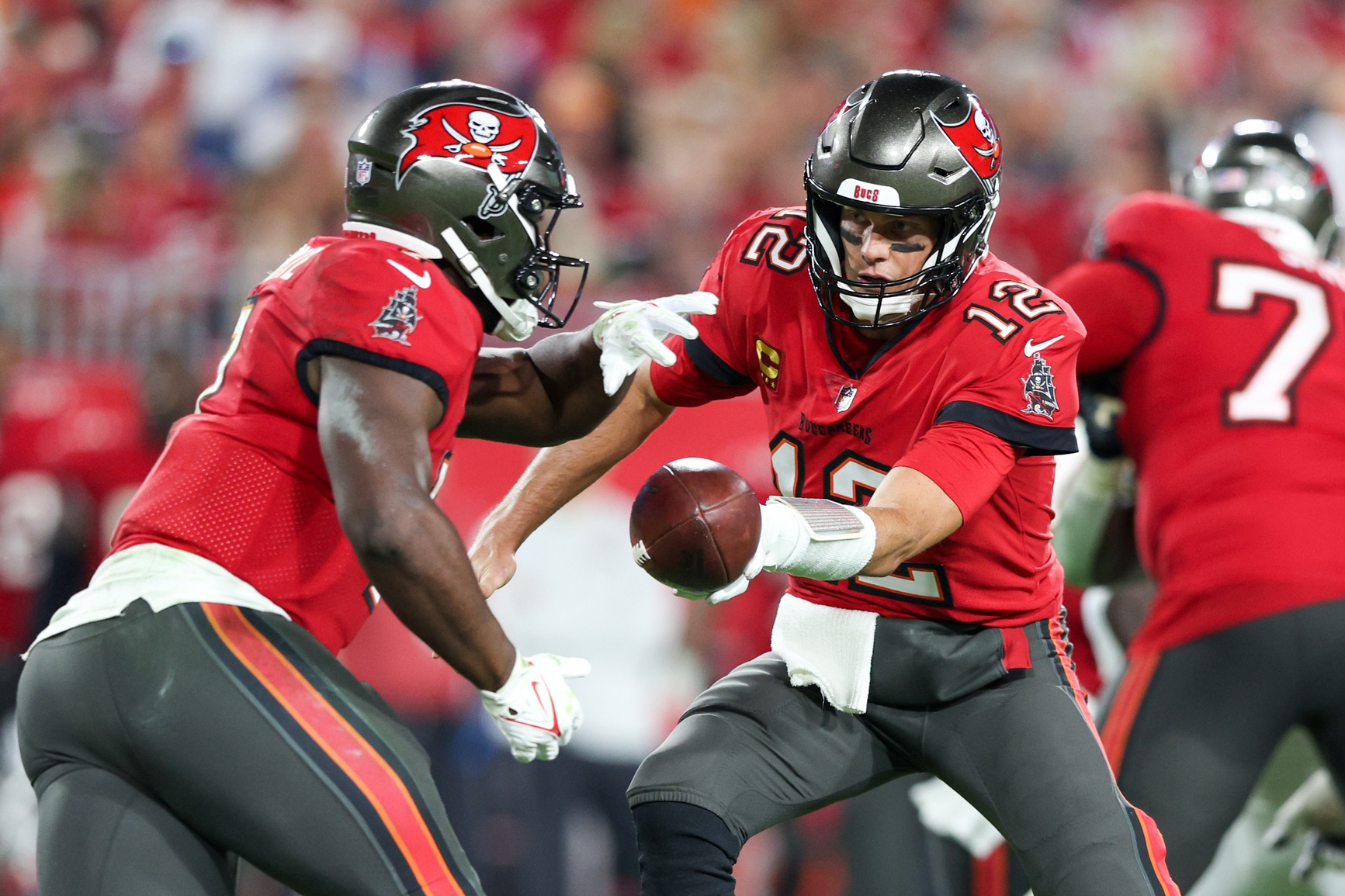 The NFC South possesses a cumulative -94 point differential heading into Week 14 of the NFL betting season. That goes to show just how big a dumpster fire this conference has been as a whole since the season kicked off way back in Week 1. The Tampa Bay Buccaneers currently find themselves at the top of the heap as the only team with a .500 record. Had Tom Brady not led the Bucs on successive scoring drives versus the Saints Monday night, it would be a much different story. Having already swept New Orleans and having one in the bag against the Atlanta Falcons, the Carolina Panthers look to be the only thing standing in the way of Tampa logging back-to-back titles. Let’s break down the division’s current offerings at BetRivers Sportsbook and see if anything is worthy of being invested in heading into Week 14.

It’s crazy, but the Bucs are now the heaviest favorites they’ve been all year to win the NFC South crown. It’s been a long uphill climb for “The GOAT” and co. and they’re not even a winning team as of yet. Exhibiting a flare for the dramatic and not much else, one can only wonder if the team as assembled will have enough in the tank to make a playoff run. That’s if they even qualify. BetRivers currently has Todd Bowles’ troops installed -770 favorites to do so. I’m not entirely sold. Should you hold a differing opinion, it would make much more sense to lay -715 to win the division than pony up the extra cheddar to punch a playoff ticket. Only one team out of this division is going to the playoffs; that being the winner.

The next few weeks will be extremely telling of this team with games lined up on the road at San Francisco and then back home against Cincinnati. Win both and it should be smooth sailing into the second season. Split and it will leave the door open for either Atlanta or Carolina to make things a bit more interesting come the final two weeks of the season. All said, it’s a pretty safe bet Tom Brady leads the team to the postseason. Unfortunately, the opportunity to hit the under of their adjusted wins total has come and gone with nine wins likely being good enough to seal the deal.

What an utter waste of a season it’s been for the Falcons. Now 5-8 SU and a longshot 10-1 choice to make the playoffs, it made absolutely no sense to continue marching Marcus Mariota out there once the season started to get away from them. That occurred following a Week 10 loss to the Panthers in Carolina in that rain-soaked Thursday nighter. Yet still, Arthur Smith decided it was a good idea to continue marching out his overrated QB1 each of the last two weeks. The end results were tough hard-fought losses to the Commanders and Steelers.

I honestly can’t believe a push is still in play on the under 5 wins bet made before the season kicked off. Atlanta split its first six games for crying out loud! Whether or not I pay the man or get my money back means nothing as that investment was already recouped by betting on Atlanta not making the playoffs a month ago. BetRivers no longer offers that market. It does however have the Falcons adjusted wins total clocking in at 6.5 with -110 juice on both sides of the impost. Gimme the under! For Atlanta to exceed the target, it would need to split its final four games @New Orleans, @Baltimore, Arizona, Tampa Bay. I believe there to be greater than a 52.3 percent chance the Falcons only manage one with Desmond Ridder likely nestled in under center.

The Panthers own identical 10-1 odds as the Falcons to make the playoffs as well as 10-1 odds to win the NFC South. For reference sake, Atlanta clocks in at +1100 to win the South. That tells NFL futures bettors BetRivers is of the belief Carolina is the Buccaneers biggest threat and I have to agree. That being said, I want absolutely nothing to do with throwing money at a Sam Darnold-led team. It’s crazy to think, but I would’ve been more comfortable if it were Baker Mayfield lining up under center. Regardless, the team is still fighting for interim coach Steve Wilks with it rattling off covers against the NFL odds in five of the last six games. I don’t foresee Carolina ultimately getting in the way of the Bucs, so the Panthers are a team I’ll just look to back or fade week-to-week knowing full well I need three more wins over these final five weeks to cash my over 6 wins ticket in.

The Saints have been a horrendous story throughout the 2022-23 NFL betting season. With only a win against the defunct Rams in their last five games, you can put a fork in Dennis Allen’s crew! Seriously, how the hell did they lose that game on Monday night! Pathetic! Absolutely nothing positive will come out of the first season of the post Sean Payton era. I wonder if the current coaching staff survives it. We locked in under 6.5 wins and “No” to make the playoffs when we last reported on this squad; neither offering is currently available at BetRivers – that’s how bad it’s gotten in the bayou!