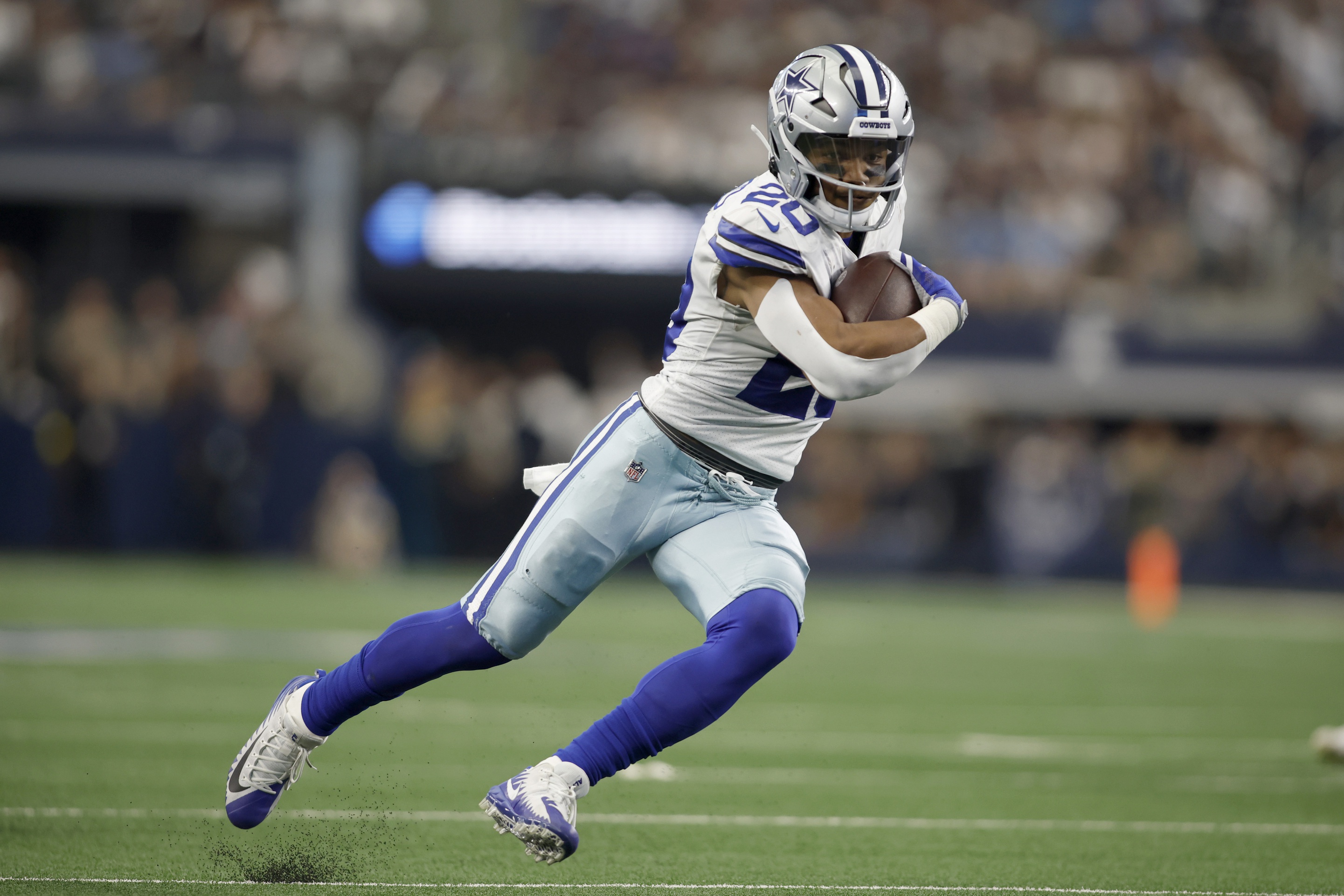 We ripped off a solid showing on the ground last week cashing two of three running back props at BetRivers Sportsbook. Though the Los Angeles Chargers got their doors blown off by the Seattle Seahawks, Austin Ekeler still came up big for us to easily surpass his 92.5-yard rushing + receiving prop. Same goes for the rookie in Houston who once again proved to be the only bright spot for the Texans offense by ripping off 92 yards to crush his 64.5-yard rushing prop against a tough Denver defense. It ended up being a mistake to fade the King after Derrick Henry went over the century mark to lead the Titans to a crucial series sweep of the division rival Colts. Let’s see if we can go undefeated in Week 8 with another 3-pack of winners!

I know it sounds terrible, but I’ve secretly been hoping Ezekiel Elliott went down to an injury so as to allow Tony Pollard to get a full workload. Guess what peeps – it’s Tony Pollard season! With Zeke likely to miss Sunday’s home tilt against the Bears to rest his ailing knee, I get to fire up Pollard on my fantasy roster with utmost confidence. His insertion as the RB1 couldn’t have come at a better time running up against a Chicago defense that’s had major issues preventing running backs from racking up huge totals both rushing and catching pigskins out of the backfield.

The Bears have been ripped for nearly 150 yards per game (No. 29) and 4.7 yards per carry (No. 24). Opposing offenses have run the ball an average of 31.6 times per game against Chicago which is far and away the most in the NFL. Dallas is one of the biggest favorites on the board this week (-9.5) which should find the game script allowing Pollard to do his thing all game long. The impost listed up above is my best guess since one wasn’t available at the time of this writing. Wherever it’s ultimately released, you’re going to want a piece of it. So act quickly because it’s going to get steamed immediately after hitting the board!

With the Dolphins high-flying passing attack getting the benefit of playing on the fast track of Ford Field, many a player prop bettor will be looking to target Miami’s pass catchers. And why not? Tyreek Hill and Jaylen Waddle are destined to get theirs against a Lions pass defense that’s already been taken to school numerous times. That being said, I’m not so sure Mike McDaniel will want to get into a shootout with a wounded Lions team backed into a corner. Detroit is nowhere near as bad as its 1-5 SU record suggests.

Still, its run defense is one to target with it getting ripped for over 160 yards per game (No. 31) and over 5.0 yards per carry – an output that increases to 5.8 when at home! Raheem Mostert isn’t sexy by any means, but the dude’s gotten 60 percent of the snaps over the last five games and is the bonafide RB1 of Miami’s backfield. With the Fins favored in a matchup with a game total of 51.5, you want to be invested in the guy getting the lion’s share of the snaps. That guy is Mostert, and he’s averaged nearly 78 rushing yards per game over the last month. In a potential shootout, this impost is short – take advantage!

I’m going off the beaten path for the third and final selection of the week. I want a piece of Atlanta’s running game in this matchup with the division rival Panthers who enter it off a huge upset win against the Tampa Bay Buccaneers. Carolina had its day in the sun last week shocking the GOAT, but it’ll have its hands full running up against a Falcons squad looking to win a third straight in front of the hometown faithful. Atlanta owns the league’s fifth ranked rushing attack, and will have no issues looking to improve upon its outputs against a run defense that’s been gotten for better than 120 yards and 4.1 yards per carry.

This Caleb Huntley kid runs hard. He’s gone for just under 50 yards and 4.4 yards per carry in the three games he’s carried the rock at least eight times. Linemakers figure this to be a close divisional battle lining the Falcons 4-point favorites with a game total of 41.5. With Atlanta only passing the ball an average of 17.3 times over its last three games while ranking fourth in rush attempts (33.0) per game overall, figure Huntley gets a heavy dose of burn which in turn sees him topple his yardage prop for the third time in his last four tries.