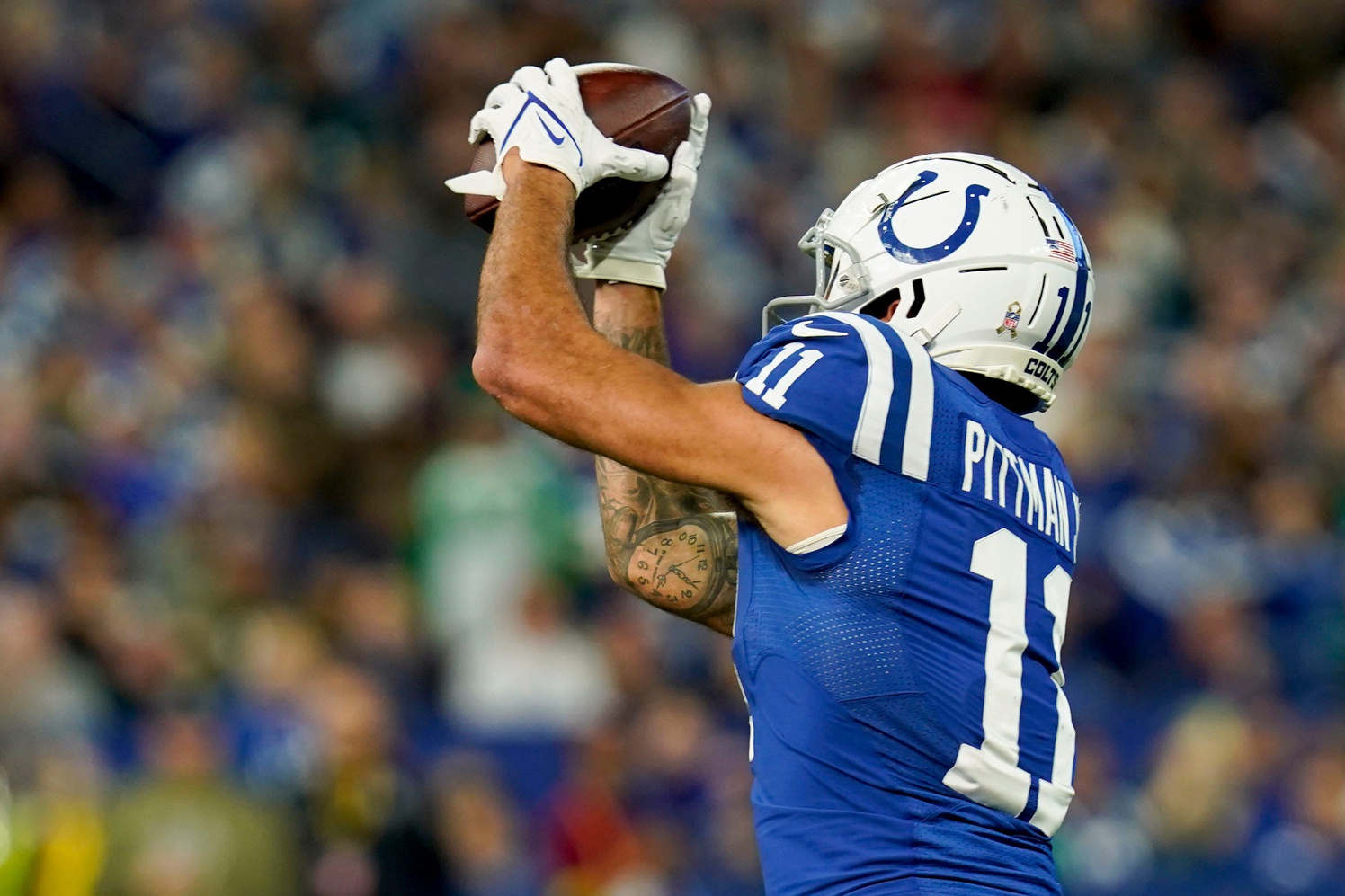 the six suggestions to once again take a good chunk away from the fine folks at BetRivers Sportsbook. Justin Jefferson made a mockery of his receiving yard and reception props by turning his 11 receptions into an absurd 223 yards! Darius Slayton was held in check by the Eagles stout pass defense which saw him unable to exceed his receiving yard or reception props. Garrett Wilson did manage to exceed his receiving yards prop, but failed to score that anytime touchdown. We’ll take a 5-1 showing every day of the week and twice on Sunday! Let’s keep the mojo rising in a loaded Week 15 slate with another assortment of wide receiver player prop bets!

The Colts enter Week 15 off a bye to take on Minnesota and its laughable pass defense. Anytime you run up against the Vikings, you target the opposing team’s pass catching core – no questions asked! Preferably their WR1. I’ve singled out Michael Pittman Jr. as that guy with him receiving nearly 14 percent of the offense’s overall target share and the next closest challenger – Paris Campbell – clocking in at just over nine percent.

The Vikings bleed receiving yardage to opposing pass catchers evidenced by giving up a league-high 2709 receiving yards and 13.8 yards per reception (No. 28). Over the last month, only the Detroit Lions have hemorrhaged more receiving yards to opposing pass catchers. This tilt already sports one of the higher totals of the Week 15 slate, and will be played on the fast carpet of M&T Bank Stadium. Don’t sleep on this one as the number to beat is likely to soar the closer we get to kick-off!

I’m extremely bullish on the Chargers right now knowing Justin Herbert finally has a full assortment of weapons at his disposal for the stretch run. We haven’t seen the Chargers running all its working parts out onto the gridiron since Week 1, and I got to tell you it was pretty impressive watching them do work against the Dolphins last week. Keenan Allen proved to be the target hog, but it was Mike Williams that helped spread Miami’s defense out with his ability to go off for big chunk plays downfield. He ended up catching all six of his targets and turned them into 116 yards and a touchdown with a long of 55.

In running up against the Titans and their 31st ranked pass defense that’s been ripped to the tune of 283+ yards per game and 7.0 yards per pass attempt (No. 24), this is a spot for Big Mike to eat! Especially with the Titz ranked No. 28 in pass DVOA while serving up 786 total yards, 12.5 yards per reception, and 7 TD to opposing wide receivers over the last month. Look for Williams to make up for lost time and SMASH in this get-well spot against the floundering Titans.

From Week 9 to 12, Elijah Moore didn’t have any actionable props on the board. That’s flat-out bonkers considering he ended last season as a top-15 WR! It just went to show how much of a nothing burger he was with Zach Wilson running the offense. But since Mike White was handed the QB1 duties, Moore has come alive catching both targets for 64 yards and a touchdown in Week 12 and six of 10 targets last week for 60 yards. White is currently listed as questionable to play in this game, but Robert Saleh has been quoted as saying they’re preparing for the Lions with him expected to be in the huddle.

It’s going to be cold in New York on Sunday, but will also be sunny and wind won’t be an inhibitor. That bodes extremely well for the Jets to make hay through the air running up against a piss poor Lions defense that’s been bleeding fantasy goodness to opposing pass catchers all season long. While in the midst of a resurgent comeback, no team in the league has surrendered more passing yards to wide receivers over the last month with Detroit being had for 969 yards, five touchdowns and 13.3 yards per reception. While rookie Garrett Wilson is inarguably the offense’s alpha wide receiver, there’ll still be enough meat on the bone for Moore to do some damage as well; especially with Corey Davis likely to miss due to a concussion.