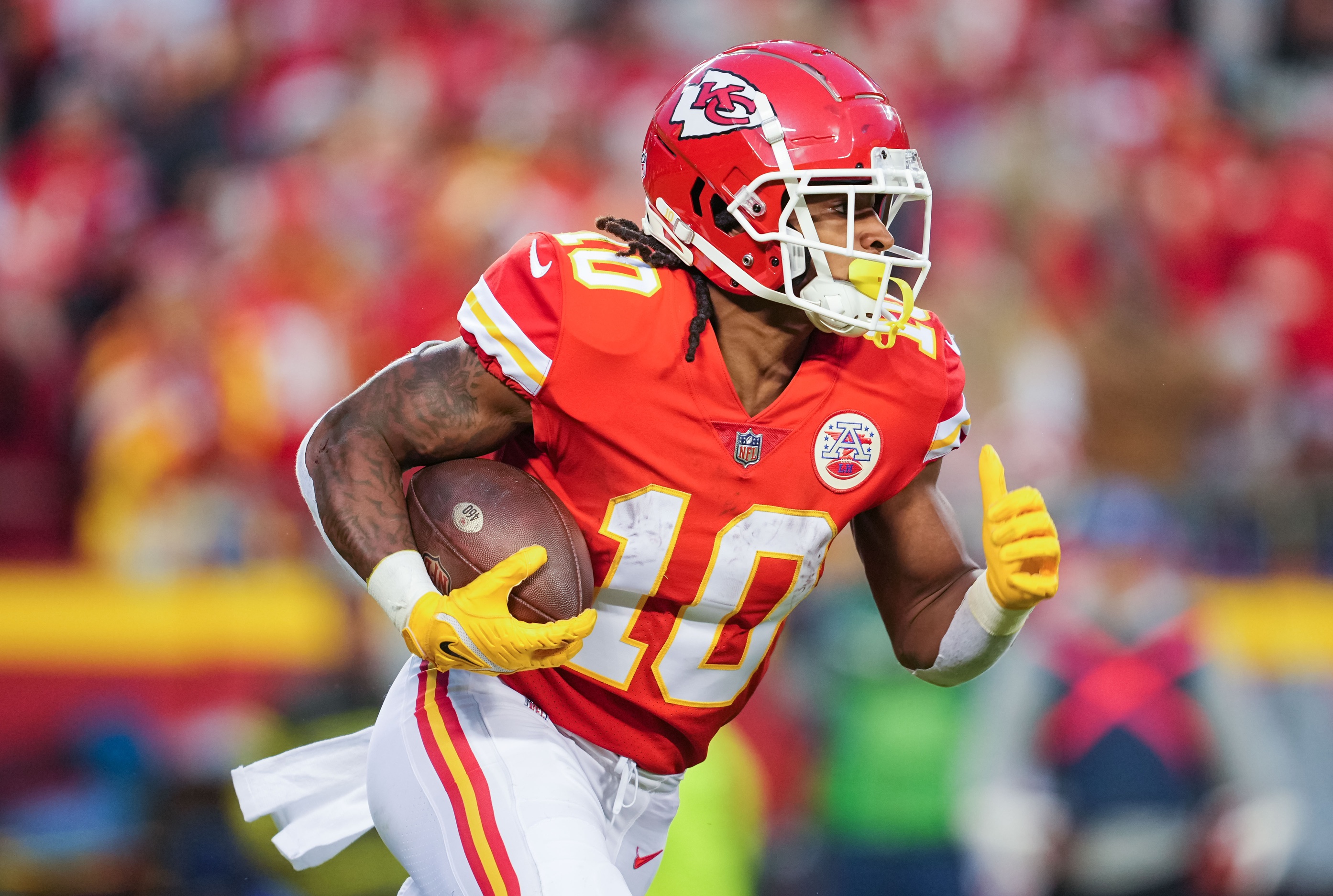 Embarrassing. Nauseating. Putrid. Those are the only adjectives I could come up with to describe the end results of the three running back player props offered up last week. I came nowhere close to cashing any of them and gave a good chunk of my bankroll back to BetRivers Sportsbook because of it. I’m still left scratching my head over D’Andre Swift’s utilization against the Vikings. Doesn’t Detroit know that he’s an uber talent when healthy? Last week’s win over the Texans proved to be a Zeke game. Pollard’s carries suffered because of it. Tampa Bay failed to show up on either side of the ball in the thumping at the hands of the 49ers, and RUN CMC played a large role in that 35-7 beat down ultimately killing my under position on his total scrimmage yards. The horrific showing put a major damper on dominating my Week 14 QB and WR calls. It’s back to the drawing board in Week 15!!

Since Week 10 when his rushing yards prop closed 33.5 at BetRivers, Isiah Pacheco has seen his target numbers open in the 54-67 yard range. His Week 15 rushing yards prop had yet to hit the board at the time of this writing. Regardless, I want a piece of the Chiefs RB1 in this cushy matchup with the Texans in a game figured to be extremely one-sided with Kansas City currently lined 14-point road favorites.

Pacheco has gone for at least 66 rushing yards in each of his last four starts. More importantly, he received 15, 22, 14, and 13 carries during that stretch. Houston ranks No. 27 overall in rush DVOA per Football Outsiders in serving up a league-worst 165.8 rushing yards per game at 4.8 yards per carry. Against a similarly ranked Chargers defense back in Week 11, Pacheco went for 107 yards and averaged 7.1 yards per carry to surpass the century mark for the first time in his career. I have Sunday targeted as the second time he pulls off the feat, so also look to throw a little extra cheddar on him going for 100+ yards at a nice plus-money return.

This is my most confident running back player prop for Week 15!

As big a matchup this is for the Cleveland Browns with their hopes of punching a ticket into the postseason on life support, I still expect the Ravens power running game to give them major issues in what’s expected to be a low scoring grudge match between bitter AFC North rivals. J.K. Dobbins hogged the spotlight last week in his return to the huddle after erupting for 120 yards and a 44-yard touchdown jaunt on 15 overall carries. He’s the most explosive back in the Ravens backfield and deserves to get the lion’s share of the carries.

However, Gus Edwards also played a major role in Baltimore’s plan of attack evidenced by getting his number called 13 times. While he didn’t go off for a chunk score, he still turned that workload into 66 yards and a 5.0 yard per carry average. Linemakers opened his rushing yards prop at 39.5 and it was immediately bet down. That has everything to do with what the prop betting market saw Dobbins do last week. Don’t fool yourself! The Gus Bus will still be heavily involved in this matchup with the Ravens looking to take advantage of a Browns stop unit ranked No. 30 in rush DVOA that’s served up 444 rushing yards and 5.1 YPC over the last month.

The Jets undrafted rookie has been a godsend in allowing the offense to move past the season-ending injury to Breece Hall incurred back in Week 7. Since taking over the RB1 reins in Week 12, Zonovan Knight has gone for 69, 90, and 71 yards all the while averaging over 15 carries per game and getting upwards of 75 percent of the early down work. So why the heck am I the party pooper fading him against a Detroit Lions defense ranked No. 26 overall against the run while serving up a hefty 5.0 yards per carry?

It has everything to do with oddsmakers likely hanging an inflated number to fool player prop bettors into thinking this is a spot he’ll go off in once again. If you haven’t noticed, the Lions have dramatically turned their fortunes around over the last six weeks. Dan Campbell’s kneecap biters are 5-1 SU and 6-0 ATS during that stretch! While the offense has lent a major hand in the rise from the ashes, it’s the defense that’s been playing light’s out with only seven teams conceding fewer rushing yards per game during that stretch. We’re talking 59.3 YPG and 3.4 YPC! Knight’s rushing yards prop has been in the 39.5 to 42.5 the last two weeks. It wouldn’t shock me if it surfaced in the mid to low 60s range this week. Should that be the case, hammer the under!