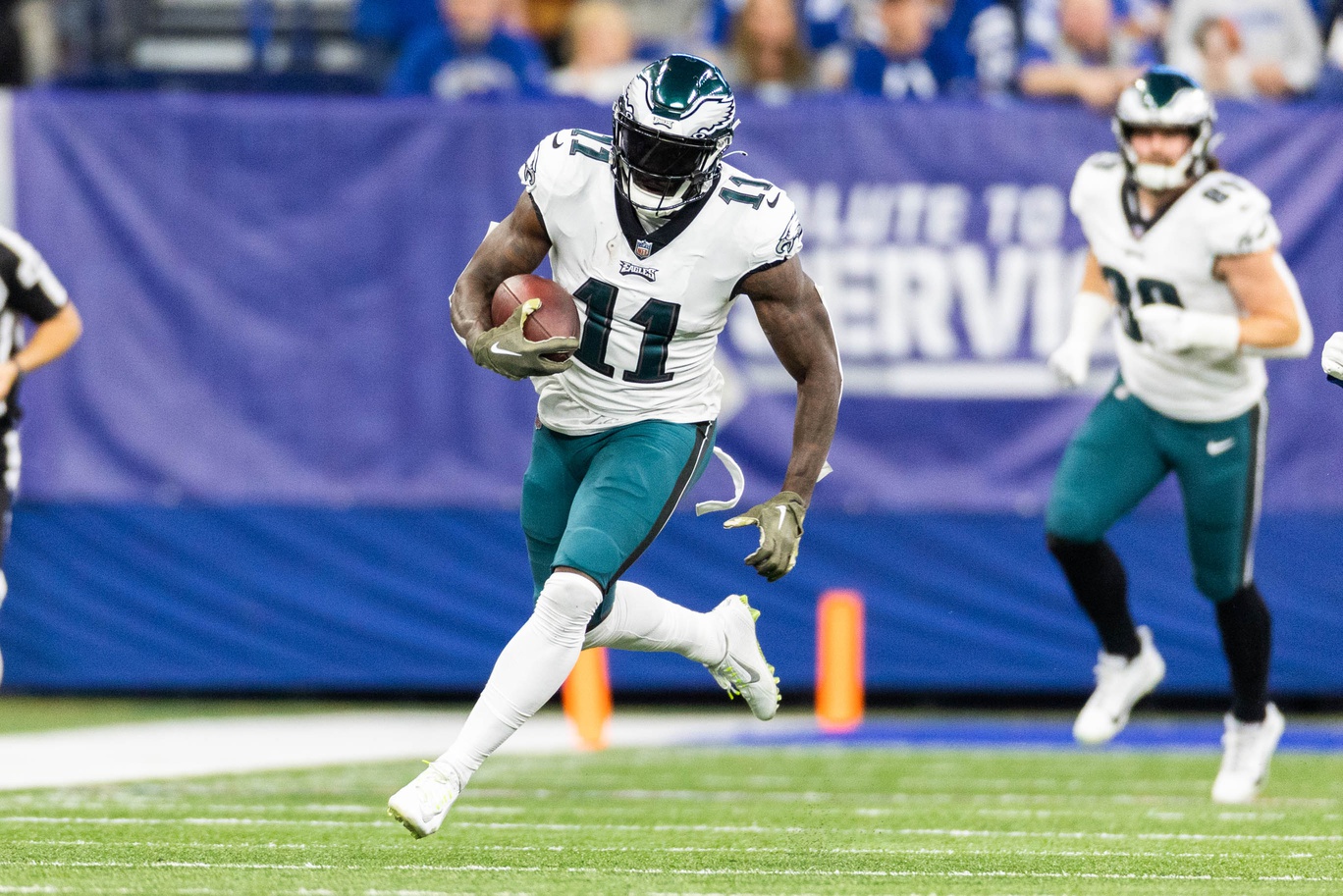 We suffered a pair of tough defeats that ultimately saw us juice out on our WR props at BetRivers Sportsbook last time out. Kadarius Toney pulled a hammy early in the first half against the Chargers which prevented him from surpassing his scrimmage yards target; while Justin Fields overshot Darnell Mooney on what would’ve been a care free waltz into the end zone from 70 yards out. That tough luck doesn’t occur and we sweep the board after George Kittle and Courtland Sutton smashed their respective receiving yards imposts with relative ease. It’s bounceback time in Week 13 – Let’s do this!!

Though the total for Sunday’s matchup between the Titans and Eagles has seen an influx of money hit the under, I’m of the belief the game plays to a high scorer with both offenses set to take full advantage of the opposition’s respective defensive weakness. As great Tennessee has been at shutting down the run (No. 3), it’s been an absolute sieve when it comes to thwarting opposing passing attacks. Mike Vrabel’s stop unit ranks No. 31 overall in allowing north of 266 yards per game. Though its ranks are middling in pass DVOA (No. 17) and yards allowed per pass attempt (No. 16), it’s still serving up 1.7 passing touchdowns per game; an output that increases to 2.0 when on the road.

I fully expect its former WR1 to serve up its breakfast, lunch, and dinner in this matchup. A.J. Brown has failed to exceed his receiving yards prop in four straight, and has only logged two touchdowns during that stretch. I have this game pegged as a blowup spot and will back him to do as such!

Jacksonville is now the owner of the league’s No. 13 ranked passing attack that averages nearly 230 yards per game. If you’ve taken a gander at my QB props for Week 13, you’ll know I’m already bullish on Trevor Lawrence outperforming his player props this week. It only makes perfect sense to stack him up with Christian Kirk who enters Week 13 the No. 11 ranked wide receiver in the game after hauling in 56 of 91 targets and turning them into 725 yards and 7 TD. His 61.5 percent catch rate ranks No. 17 overall and he’s been peppered with an average of 8.3 targets per game. Running up against a Detroit pass defense that ranks No. 29 overall and ranks out as one of the worst against slot receivers.

This is another one of those smash spots for the Jaguars WR1, so hit the over of both his yardage and receptions props and feel free to tie both wagers into a same game parlay along with Trevor Lawrence. Run it back with Amon-Ra overs and enjoy the fireworks display!

It takes brass cojones to fade the Minnesota Vikings WR1, but that’s exactly what I’m going to do when Justin Jefferson runs up against the Jets and their No. 8 ranked pass defense in Week 13. New York is only conceding an average of 197.5 passing yards per game and a miniscule 6.0 yards per pass attempt (No. 5). Its lock down coverage has traveled as well with it only giving up 6.0 yards per catch when playing away from MetLife Stadium. Its rise in the pass defense ranks is mostly attributed to Sauce Gardner who’s currently installed the runaway favorite to take home the Defensive Rookie of the Year Award over at BetRivers.

Only seven teams allow fewer than the 11.8 yards per reception the Jets have allowed to date, and their 12 interceptions are tied for the third most in the league. That doesn’t bode well for Kirk Cousins who prefers not to throw the ball into coverage, but he’s going to have to with NY’s secondary in the grills of every opposing pass catcher seemingly every snap. The O/U for this tilt currently clocks in at 44.5 and I believe it to be too high. Cousins will be forced to look elsewhere due to Sauce’s elite coverage, and that will prevent JJ from exceeding his receiving yards prop for the second time in the last three weeks.