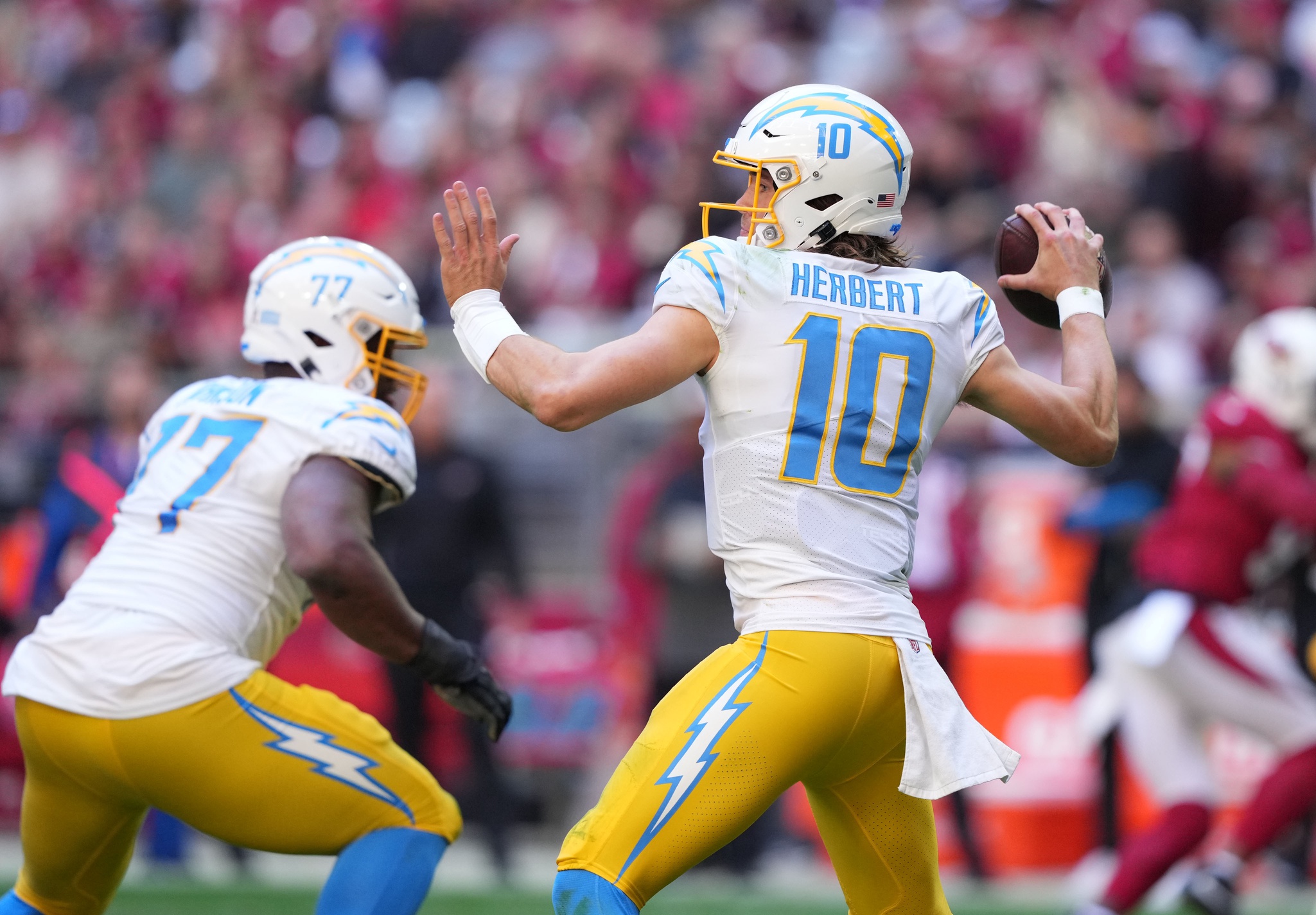 We cashed three of our four recommended quarterback props at PointsBet Sportsbook a few weeks back with Justin Herbert, Russell Wilson, and Dak Prescott each taking care of business for us. Surprisingly, the only loser of the bunch proved to be Justin Fields who failed to exceed his passing + rushing yardage prop in what I thought was going to be a smash spot running up against the Atlanta Falcons in a dome. If only he connected with a wide open Darnell Mooney early in the second quarter on what would’ve been a 70-yard touchdown strike!

Congrats to all that followed and I’m thrilled to have added to your bank rolls - Now let’s go hunting for more of the green in Week 13!

Justin Herbert cashed an over ticket for us a few weeks back when he threw for 280 yards and a couple scores in that tough 30-27 loss to the Chiefs at the gun. He followed that up with another 274 yard and 3 TD performance in the comeback win against the Arizona Cardinals last week. In averaging 277 passing yards over his last two starts, it’s pretty safe to assume the Bolts QB1 is now fully healed from the rib cartilage injury suffered at Kansas City way back in Week 2. Keenan Allen has returned to the huddle while Josh Palmer has been rock solid throughout Mike Williams’ absence. He now gets to run up against the Raiders who he torched for 279 yards and 3 TD in the season opener, and the Vegas secondary continues to be the weak-link of the defense in allowing 253.0 yards per game (No. 26) and a healthy 7.3 yards per pass attempt (No. 29); outputs that find it ranked dead last in pass DVOA.

Herbert’s averaged 304.8 passing yards in his five career starts against Las Vegas, and this matchup sports the third highest O/U on the Week 13 NFL betting board (50.5). Look for the Chargers gunslinger to excel in what should be an exciting back-and-forth affair that sees both teams racking up huge fantasy tallies!

The 2021 top overall draft pick looks to be coming into his own. Over Trevor Lawrence’s last three starts, the Jaguars QB1 has thrown for an average of 271.7 yards and a perfect 6:0 TD/INT ratio. He invades Motown off arguably the best showing of his young career after leading Jacksonville back to score the shocking 28-27 outright win over the Baltimore Ravens. His reward for doing as such is a cushy matchup with a Detroit Lions defense that’s surrendered a tick less than 260 passing yards per game (No. 29) to go along with a healthy 7.5 yards per pass attempt (No. 30).

Jacksonville’s O-Line concedes fewer than 2.0 sacks per game (No. 6) while Detroit’s only managed to produce a 30.8 percent pressure rate (No. 21). That tells me T-Law is going to have a year and a day to stand tall in the pocket and seek out Christian Kirk, Zay Jones, and Evan Engram for big gainers down the field. This tilt’s expected to be a high scorer with it bestowed with the second highest O/U on the board (51.5) and the Jaguars owners of a 26-point team total. While Detroit’s equally as bad against the run and the pass, I still expect Lawrence to eat!

PointsBet has the Colts set as 10.5-point underdogs on the road with the game total lined 44.5 for Sunday night’s throw down with the Cowboys in Big D. Matty Ice has failed to surpass this impost against the Raiders, Eagles, and Steelers in his last three starts with Jeff Saturday calling the shots. Las Vegas and Pittsburgh possess the No. 32 and No. 16 ranked pass DVOA’s in the league! While he managed to complete 23 of 32 passes for 213 yards against the Eagles No. 2 ranked pass DVOA, Philly doesn’t put nearly the same amount of pressure on opposing quarterbacks as Micah Parsons and his mates do. Dallas owns the league’s No. 1 ranked pressure rate in the NFL (40.3%) and the Colts offensive line has served up a league-worst 43 sacks!

Of the 30 quarterbacks that’ve taken 400 snaps to date, Matt Ryan’s -0.72 EPA when under pressure ranks only ahead of New England’s Mac Jones. In other words, the Colts QB1 is likely to get thrown around like a rag doll on MNF and there’s a high percentage chance that he doesn’t finish this game either due to injury or it being a blowout. With a pedestrian 15.5-point team total and catching double-digits, this won’t be a night to remember for the veteran quarterback.