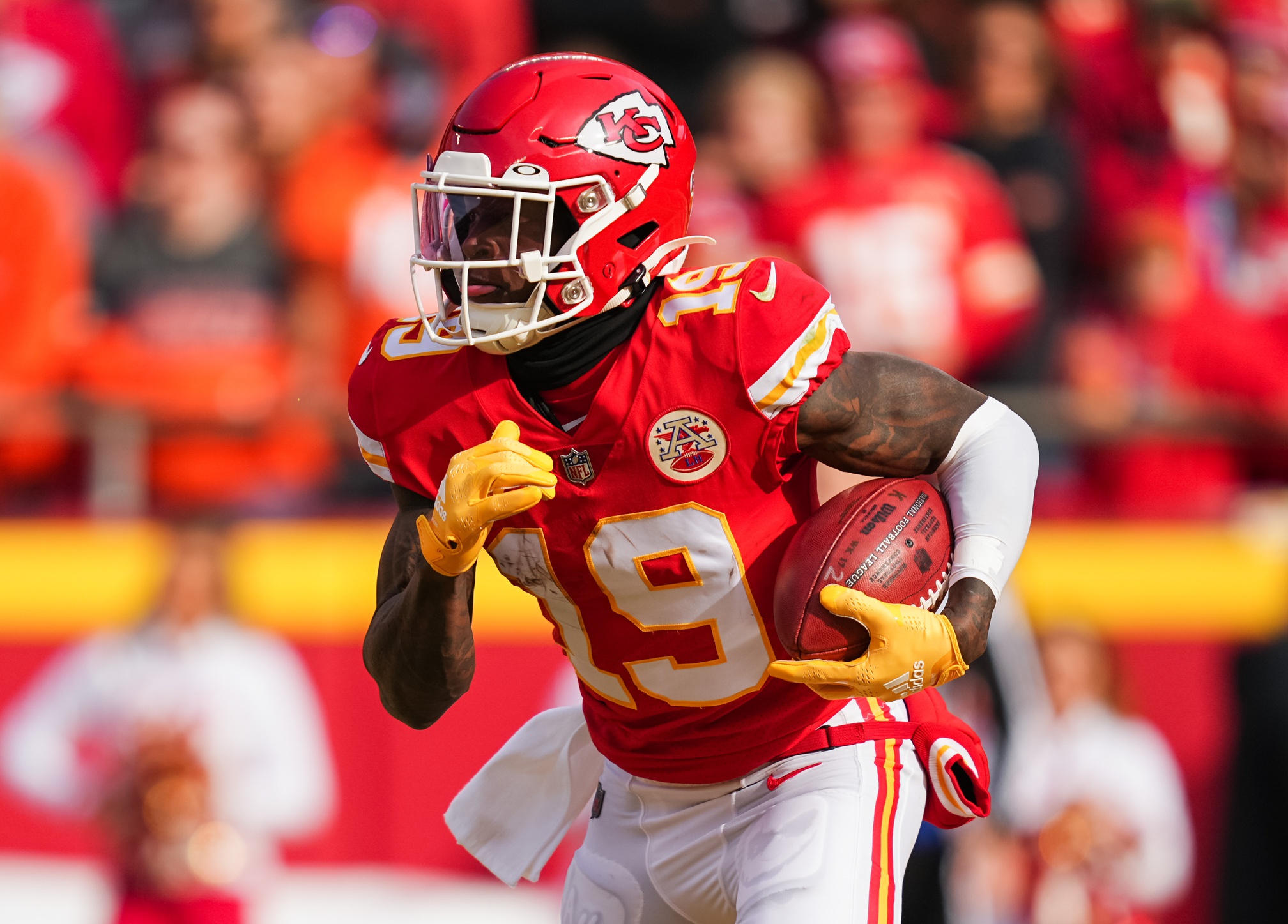 We ended up splitting our wild-card weekend player prop suggestions at PointsBet Sportsbook last week, but could’ve just as easily gone 5-1 with the lone bad call being the under of Brandon Aiyuk’s receiving yards total. I think he surpassed it on his first two catches and ended up with only three for 73 yards. Jeff Wilson Jr. and Joe Mixon came nowhere close to surpassing their rushing yards totals as expected, while Chris Godwin proved to be Tom Brady’s most reliable target to shatter his receiving yards prop. The Chargers getting out to a 27-0 lead saw Justin Herbert only throw for 273 yards – we needed 280! Another bitter pill to swallow was Dalvin Cook coming up 11 yards short of his rushing yards impost.

Let’s see if we can’t turn a profit in the Divisional Round!

Patrick Mahomes threw for 331 yards and 4 TD against the Jaguars defense when the teams hooked up in Arrowhead back in Week 10. One of his favorite targets in that game proved to be Kadarius Toney who received the third most targets behind Travis Kelce and Jerick McKinnon. He hauled in four of five and turned them into 57 yards and a touchdown.

Though Toney has only been on the field for 104 snaps and run 62 routes as a member of the Chiefs, he’s gotten the attention of Mahomes evidenced by his 27.4 percent targets per route run. Only Kelce possesses a higher TPRR (27.7%). Running up against a Jags pass defense ranked No. 30 in pass DVOA that he’s already succeeded against to date, I’m looking for a well-rested No. 19 to cook up some magic in his first taste of the playoffs.

The Giants 26th ranked pass defense just served up 273 yards and a pair of passing touchdowns to Kirk Cousins last weekend. While New York did a solid job of taking Justin Jefferson out of the game holding the stud wide receiver to seven catches and 47 scoreless yards, it got ripped for 129 yards by T.J. Hockenson. I got a feeling the same type of scenario plays out in this third meeting with New York likely to expend a ton of effort taking A.J. Brown out of the game.

That will likely still bode terribly for the GMEN considering how dominant DeVonta Smith was against them in the two regular season meetings. He turned five catches on eight targets into 64 yards and a touchdown in the first meeting, and followed it up with another seven catches for 67 yards on eight targets in the rematch. That’s 15 total targets through two games playing alongside No. 11! Owner of a 25 percent target share and ranking second with a 30+ percent team air yard share, Smith looks ripe for an over running up against the Giants No. 22 pass DVOA.

I fully expect Cincinnati running backs to play a large role in the offensive game plan against Buffalo with the Bengals front wall significantly hindered heading into the matchup. But will it be Joe Mixon or Samaje Perine getting most of the looks?

Going by last week, it’s likely to be the former but you never know. I’ll bank on it and look for Mixon to build off last week’s effort that saw him turn four targets into three receptions and a paltry 17 yards. If Joe Burrow is flushed out of the pocket with regularity, it’ll really open things up for No. 28 to destroy this impost on a single play. Here’s to hoping we learn our fate quickly!

The 49ers held Kenneth Walker III to just one reception for three yards last week, but the Seahawks RB1 isn’t known for being a pass catcher. That’s not the case with Tony Pollard who was targeted out of the backfield 55 times over the course of the regular season. He snagged 39 of them and turned them into 371 yards and a trio of touchdowns. Of the 29 or so running backs that logged 500 snaps this season, Pollard’s 9.5 yards per reception ranked No. 3 overall behind Kyle Juszczyk (10.5) and Derrick Henry (12.1)

While San Francisco has proven to be a stone wall defending the run in allowing fewer than 78 yards per game (No. 2), it’s proven to be a bit susceptible to running backs catching passes out of the backfield. It’s ceded a 70 percent catch rate and allowed 3.3 yards per catch. That being said, it’s yet to run up against a back as explosive as TP20 in the open field. With Dak Prescott forced to deal with heavy doses of consistent pressure by Nick Bosa and co., I firmly expect Pollard to be his safety valve and surpass this impost rather quickly.