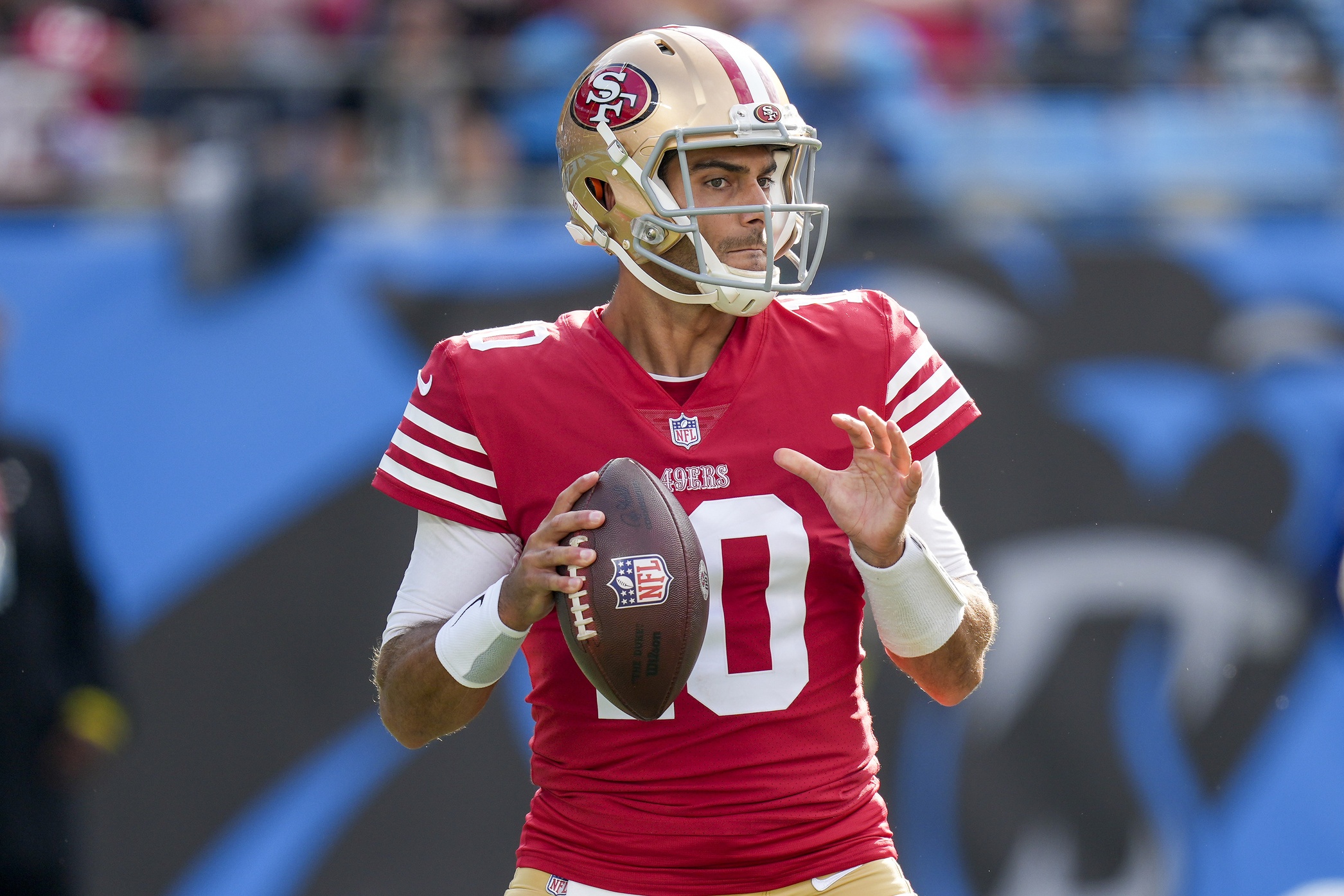 The NFC West has been anything but predictable to this point of the season with last year’s winner and Super Bowl champ bringing up the rear of the standings. While only one game separates the leader from the rest of the pack, there looks to be an enormous gap between the San Francisco 49ers and everyone else. The Niners were my choice to win this division at the outset of the NFL betting season, and they’re now favored to win it for the very first time. Whether that holds up remains to be seen, but Kyle Shanahan’s squad looks to be the cream of this division’s crop.

It looks to be a pretty safe bet that three teams from this division won’t be qualifying for the playoffs like they did a year ago. As it stands right now, only the 49ers and Rams are favored to do so at PointsBet Sportsbook. Geno Smith and the Seahawks have been a fun story to this point, but that team isn’t winning this division as sorry the defense is. With that the case, do we really want to get involved with either the Rams or Cardinals? I sure as heck don’t!

No team has allowed fewer points in the NFC than San Francisco who’s gotten out to 3-2 SU and ATS starts for NFL bettors. With Jimmy Garoppolo back at the helm and in a groove, the Niners cruised to wins and covers against the Rams and Panthers over the last two weeks. They outscored both teams by the aggregate score of 61-24 and covered the closing NFL odds with relative ease in both matchups. All the while, the injury bug continues to take huge bites out of the roster. Last week, it ended Emmanuel Moseley’s season and resorted both Nick Bosa and Jimmie Ward to the sideline with groin and hand injuries. Even so, San Fran held Carolina to just 15 points and 308 yards of combined offense.

Of the four teams in this division, the 49ers were set to run up against the easiest schedule strength per the folks over at Sharp Football Analysis. That bodes extremely well for anyone that got down early on their odds to win this division as well as the over of their 10-game season wins total which currently sits at 10.5 on the readjusted futures odds. The upcoming three-game stretch @Falcons, Chiefs, and @Rams could prove to be a major predictor of things to come. Should it at the very least take two of those games and sweep the rivalry with LA heading into the Week 9 bye, the Niners will own a stranglehold of the division. Whether they can see it all the way through remains to be seen - My money says they do!

The Rams should seriously think about changing the teams name to the Los Angeles Cooper Kupp’s since the reigning Offensive Player of the Year Award winner has been the only bright spot through the first five weeks. I mean seriously, what the heck was that against Dallas? I couldn’t wrap my head around LA being a near touchdown favorite in that game, and the end result proved me right. That being said, I was shocked at how uncompetitive the Rams proved to be. Though they outgained the Cowboys 323-239, three costly turnovers proved to be the great equalizer. And once again, the offense got next to nothing on the ground with most of the yardage and the team’s lone touchdown being accrued by none other than Mr. Kupp.

Aaron Donald and Jalen Ramsey continue to anchor the defense. The former continues to chew and spit out opposing quarterbacks, but the latter has had issues in coverage. There’s nobody else of substance to speak of on that side of the ball with the unit only ranked amongst the Top-11 due to those two aforementioned players. I wanted absolutely nothing to do with this fraud of a team entering the regular season, and I still want nothing to do with them. It’s readjusted wins total is down to 9.5 from 10.5 and its now a coin flip to qualify for the playoffs after being a heavy favorite to do so entering the regular season.

Following this week’s get right spot at home versus the Panthers, the Rams will go on bye and then face a gauntlet that includes 49ers, @Buccaneers, Cardinals, @Saints, and @Chiefs. If bearish like me, I’d wait to see what “No” to make the playoffs pays out at following Sunday’s likely win over Carolina. It might end up being the best rate of return we’ll see for quite some time.

Regardless of giving the Eagles a stiffer challenge than many expected last week, I still have my reservations about Kyler Murray and Co. competing for the title and heading back to the playoffs. Zona under 8.5 wins was a big bet for me in the offseason, and I’m yet to see anything this team has done to make me regret that decision. With Matt Rhule just fired, Kliff Kingsbury is now the +150 favorite to be the next coach fired.

That being said, I’ve actually backed this team a few times this season and they’ve been good to me; especially last week against the Eagles. I however still don’t have high hopes. The schedule ranks out as the ninth toughest overall, and the offense is yet to kick it into high gear. To top it all off, “No” to make the playoffs chimes in at -350. Arizona is a team to back or fade on a weekly basis. Don’t bother getting involved with this squad in the futures market – it’s a losing proposition.

I can’t believe I’m saying this, but Geno Smith looks to be the Real Deal Holyfield! Fantasy circles are already applauding him for the work he’s done to this point in allowing team owners that lost Dak Prescott, Tua Tagovailoa, and Trey Lance a second chance at life. But let’s be real here. The Seahawks have conceded the second most points allowed in the NFC and the most yards of all 32 teams. While the offense has been a welcome surprise, Seattle isn’t going to compete with the 49ers - or Rams for that matter - surrendering over 30 points per game!