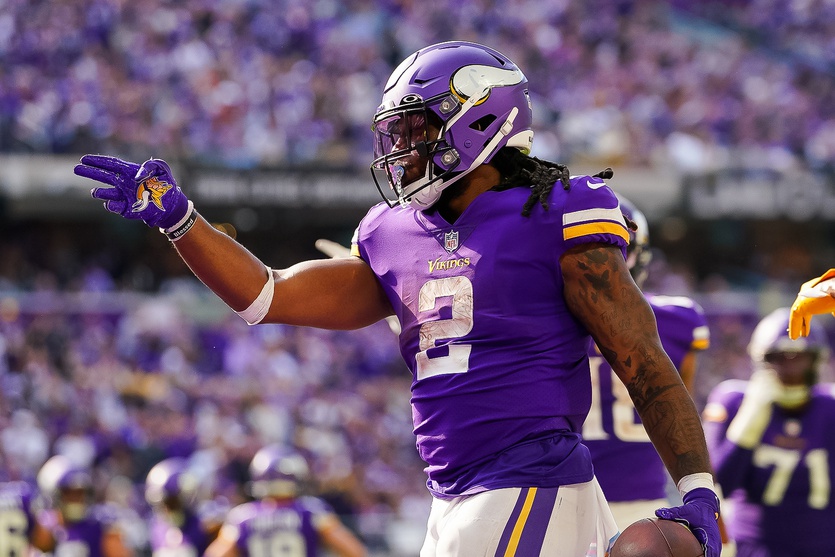 Entering the regular season, I expected the NFC North to be one of the more entertaining divisions in the NFL. Unfortunately, that hasn’t been the case as the schedule turns to Week 6. The Green Bay Packers have had all sorts of issues finding traction on either side of the ball, while the injury bug has completely decimated the Detroit Lions. This has paved the way for the Minnesota Vikings to catapult themselves to the top of the heap, and they’ve done what’s needed to take advantage of the opportunity.

Still, something tells me it won’t be this cut and dry moving forward. Let’s put the odds to win the division over at PointsBet Sportsbook under the microscope and see if there’s any buying opportunities to add to the futures portfolio.

Before the season kicked off, I was yelling from rooftops to load your portfolios up with Minnesota Vikings futures tickets to win the NFC North. After initially hitting the board at +240, Kevin O’Connell’s squad is now the -120 favorite to take home bragging rights for the first time since 2017.

Since getting skunked 24-7 by the Eagles in that sorry showing in the Linc back in Week 2, Minny has rattled off three straight wins against the Lions, Saints, and Bears. If you can believe it, they failed to cover the NFL odds at PointsBet in all three of those triumphs. That being said, it doesn’t matter how much you win by just so long as you win when it comes to betting a successful futures odds bettor.

While the defense leaves a bit to be desired, the offense has been above average to this point. But that’s just the thing; I’m thinking there’s still some major growth to be had on that side of the ball and we’ve only just begun to see the domination of Justin Jefferson. Once the running game starts humming, this offense is going to beast!

With the schedule soon to take a turn for the worst in mid-November, it’s crucial Kirk Cousins and Co. continue taking care of business against teams it should beat. If it does just that, look for the Vikings odds to win this division to continue getting chalkier.

The Green Bay Packers are no longer the favorites to win the NFC North after dropping its London game in a shocking decision to the New York Giants. Now a full game back in the standings and losing the early-season tiebreaker to the Vikings, Matt LaFleur and his staff got their work cut out for them in order to get back into the title race.

It was known entering the regular season that the offense would go through some growing pains with Davante Adams no longer in the huddle. What was expected however was the defense carrying the load until the offense found its rhythm. That hasn’t transpired through the first five weeks with the unit once again getting destroyed on the ground (No. 21) while conceding a healthy 4.8 yards per carry (No. 22).

With five of the next eight games to be played away from Lambeau Field which includes trips to Buffalo and Philadelphia, it’s looking like Aaron Rodgers and the Green and Gold’s three-season reign atop the standings will come to an end.

It’s a sad state of affairs in the Motor City right now with the injury bug taking huge chunks out of the Lions most integral pieces to the puzzle. D’Andre Swift already missed the last two losses to the Seahawks and Patriots. Amon-Ra St. Brown likely shouldn’t have given it a go versus New England with Detroit’s WR1 a shell of his former self. D.J. Chark’s absence didn’t help matters in New England this past Sunday either.

All that said, the bye week couldn’t have come at a better time for this club. Its 1-4 SU but 3-2 ATS with the latter record suggesting it’s been much more competitive than the overall record suggests. This team had the current division leader on the ropes back in Week 3 in Minnesota, but failed to land the knockout blow. It’s also proven to be the only team that’s taken the Eagles best shot early and managed to get back in the game.

There’s a ton of talent on this roster. Once healthy, it could seriously play a role in how this division shakes out regardless of being three games in back of the current leader while also down the tiebreaker. 25-1 at PointsBet is absurd but not nearly as crazy as the 40 and 50-1 I’ve seen at other establishments.

The Lions play to an easier schedule strength than the Vikings and Packers, and Dan Campbell’s troops gets both rivals at home through Week 14. The Lions current rate of return is better than 3x and in some places 5x what it was at the season’s outset. That’s crazy talk – BUY!

The Chicago Bears are in the first year of a major rebuild from the front office to the sideline. It’s going to take time. While many fans are up in arms over the offense’s inability to sling the rock around the gridiron successfully, it’s more a matter of personnel than being unable to do so.

This is a young team currently learning the ropes. Nothing more, nothing less. This season isn’t the one to burn any bankroll backing Matt Eberflus’s squad in the futures market.