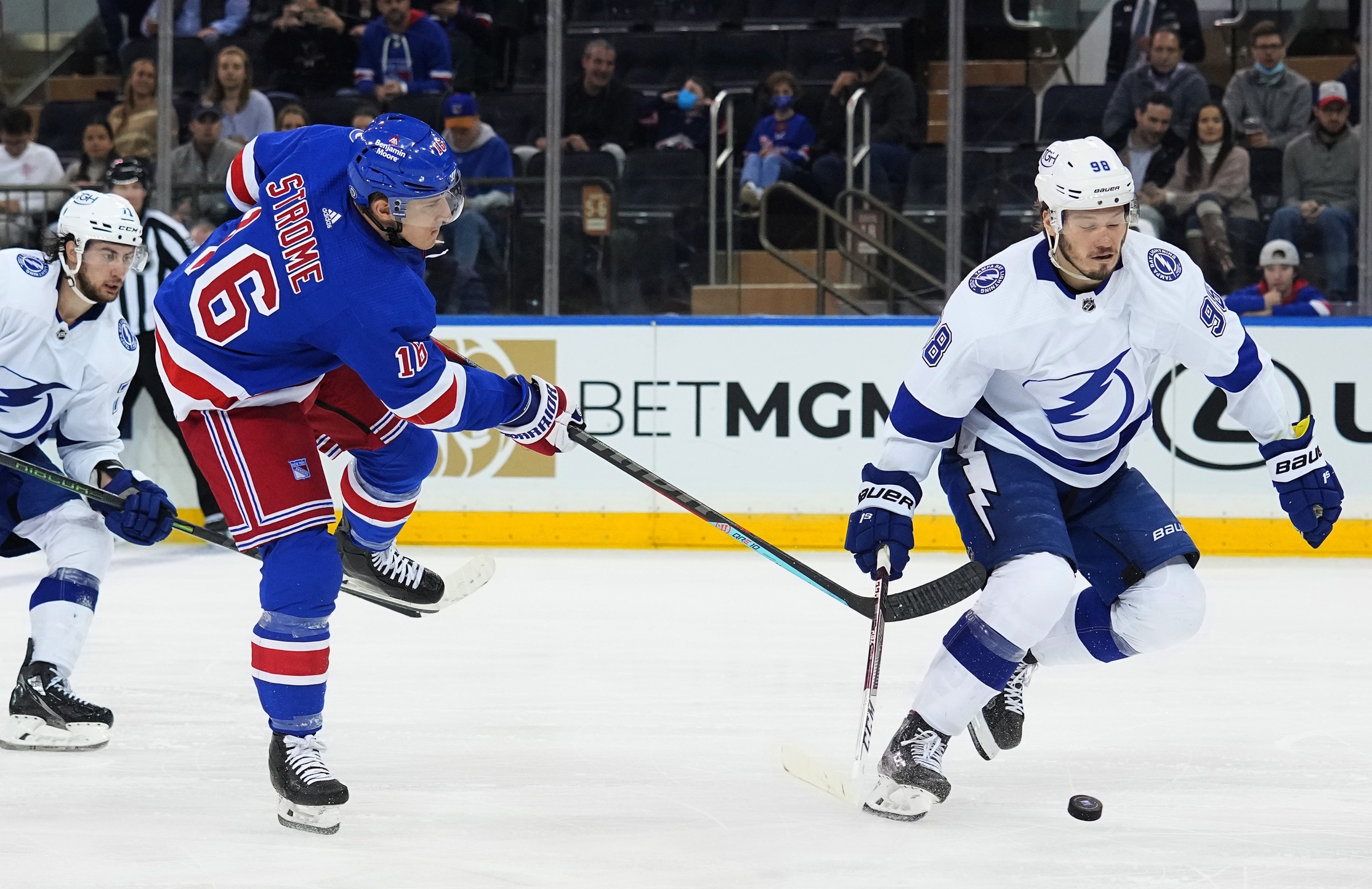 The New York Rangers and Tampa Bay Lightning will battle it out for the right to represent the Eastern Conference in the Stanley Cup Final. This is a familiar setting for the boys from the Sunshine state, who have won back-to-back Stanley Cup titles winning 10 straight playoff series along the way. Tampa overcame a 3-2 series deficit to beat Toronto in the opening round then swept the President’s Trophy winning Florida Panthers allowing a total of three goals to the NHL’s highest scoring team. The Rangers are used to coming back this postseason going 5-0 in elimination games. And for a team that relied heavily on goaltending and keeping the puck out of their net, the Rangers totaled 11 goals in the last two games against Carolina to win that series. Tampa is still the champ and that means something to oddsmakers at Sugarhouse sportsbook, who installed the Lightning as a -182 NHL pick favorite in the series.

If you thought the Lightning wouldn’t be motivated after winning back-to-back Stanley Cups you were wrong. This is a team that knows what it takes to win and they are good at doing it. Earning the top-seed in the East or a division title wasn’t a priority, because, after all, things didn’t work out too well for them when they did accomplish those things. They were blitzed by Toronto in the first game of the opening round and trailed three games to two before showing their championship mettle. They rallied with an OT win in Game 6 and a shutdown effort in Game 7.

That series win was impressive but outdone by what they did to Florida in Round 2. A NHL betting line pick underdog against the President’s Trophy winning Panthers, the Lightning couldn’t play any better. They swept the series allowing a total of three goals to the league’s highest scoring team. And goalie Andrei Vasilevskiy saved his best performance for the series-clincher stopping 49 shots in the 2-0 triumph.

In a duel of Russian goalies it’s hard to determine who has the advantage. Vasilevskiy had a sparkling 0.75 GAA and .981 save percentage in the Florida series. He’s played every minute in the postseason with a 2.22 GAA and .932 save percentage winning eight of his 11 starts. Vasilevskiy was good during the season, but not as good as Igor Shesterkin. The likely Vezina Trophy winner led the NHL with a 2.07 GAA and .935 save percentage leading the Rangers to their most wins and points since the 2014-15 campaign, which ... uh oh, ended in a loss to Tampa in the conference final.

Both teams were profitable NHL picks this season winning over 50 regular season games. Tampa did it with tremendous balance ranking eighth in goals per game and sixth in goals against. The Rangers relied more on Shesterkin and defense boasting the second-best GAA while averaging 3.05 goals. And there are some stunning similarities between the teams leading me to believe the series could be extended. Both finished with exactly 110 points with New York having one more victory and Tampa being six better in goal differential. It doesn’t stop there. They each knocked off their division champ in the second round to set up this matchup.

If the Rangers can generate offense like they did in the last two games of the Carolina series and still get strong goaltending you’re looking at the Stanley Cup champions. They tallied 11 goals in those games with the big guns coming through. Their top four scorers all netted at least one goal in those games and the power play was clicking going a combined 4 of 8 in those games. And the Rangers have to feel good about their chances after what they did during the regular season series. New York won all three meetings with Shesterkin getting a 38-save shutout in the middle contest. They were also the NHL pick against the spread in all three games.

For Tampa it’s all about defense. With Vasilevskiy stopping close to everything sent his way the Lightning have been an NHL best pick against the UNDER in their previous five games. They held Toronto to one goal in Game 7 of that series and held Florida to one goal in each of the first three games before tossing a shutout in the clinching Game 4. Florida led the NHL in scoring during the regular season while the Leafs were second.

We should have a thrilling series, but Tampa’s experience in pressure situations will be the difference. And let’s not forget that the Rangers faced a third-string goalie for most of the Pittsburgh series and caught backup Antti Raanta and his backup in the Carolina series. Taking that into consideration, my NHL consensus pick is Tampa.