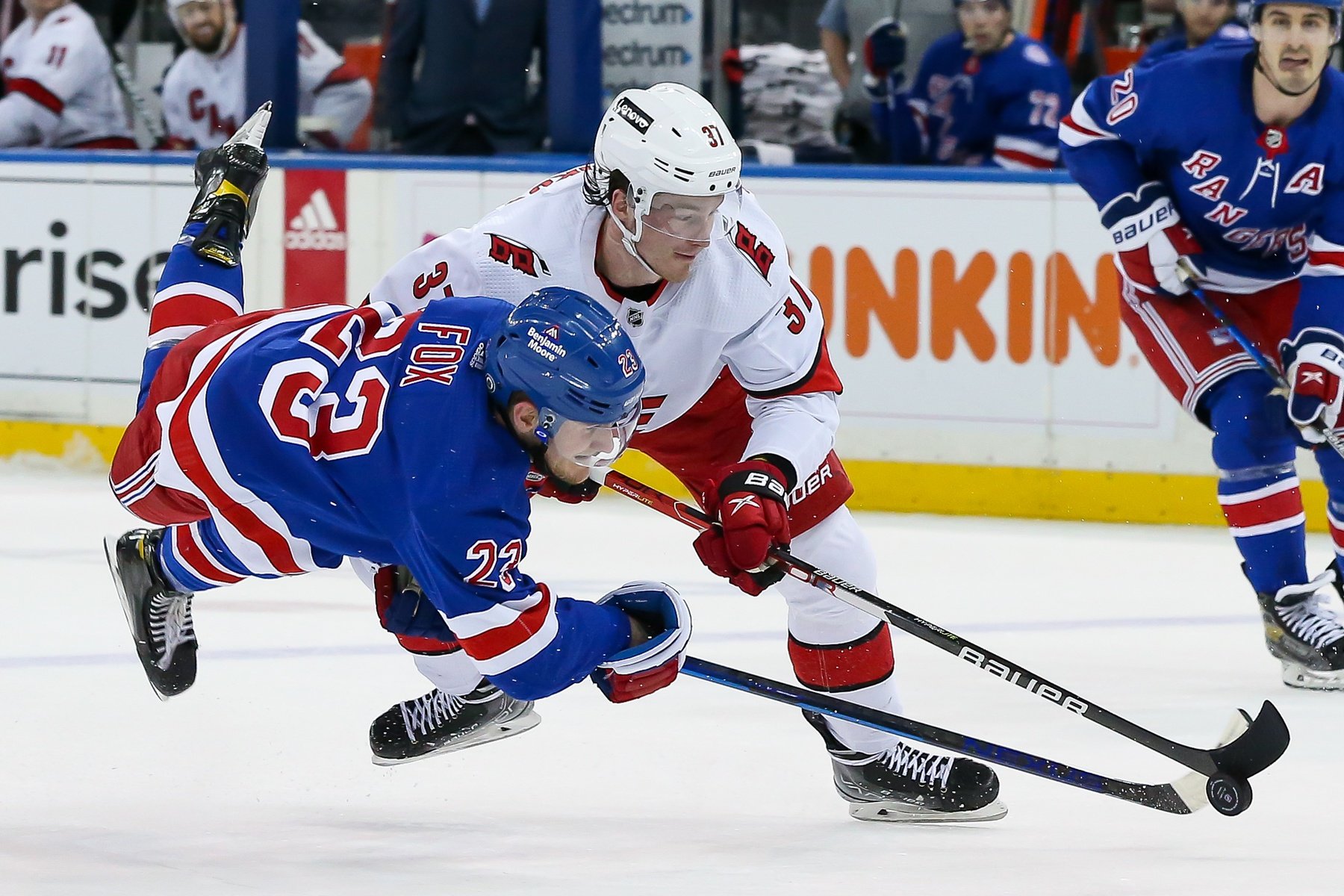 If the first game of the Eastern Conference semifinal between the New York Rangers and Carolina Hurricanes is any indication the series is going to be a tightly-contested grind. That’s actually typical of the Stanley Cup playoffs and also typical of these teams, which led the league in fewest goals allowed during the regular season. The teams battled all season for the Metropolitan Division title with the Canes eventually emerging on top to earn home ice advantage. And they were a top NHL pick at home with just eight regulation losses, tied for the third fewest in the entire NHL.

We expected goals to be at a premium and that was the case in Game 1 with the Canes earning a 2-1 overtime victory making a winner of the UNDER on the NHL betting line pick. And the Carolina victory continued a trend that’s seen the Canes win the last three meetings. The first two came late in the regular season allowing them to gain some separation at the top of the division standings.

Carolina won 29 games on home ice during the season, the most of any team in the Metro allowing them to finish on top of the standings with 116 points. And they needed that edge in the opening round winning every game in Raleigh to eliminate Boston in seven games. They outscored the Bruins in those four home games 18-6 scoring five goals three times. So, yeh, getting home ice was a pretty big deal for the Canes, who are now 5-0 at PNC Arena in the playoffs with seven straight wins dating back to the regular season.

While the Canes never trailed in their first round series, the Rangers took a different path to get here winning the last three games to knock off Pittsburgh in seven games. They bounced back after Vezina Trophy finalist Igor Shesterkin was rocked for 10 goals getting yanked in both Games 3 and 4. And while many felt a change in net was coming, Gerard Gallant stuck with the netminder who led the league with a 2.07 GAA and .935 save percentage during the regular season.

While the conversation surrounds the play of Shesterkin and the Rangers defense, they were decent during the regular season averaging 3.0 goals and they were an NHL best pick against the OVER going 7-0 while totaling 28 goals in the opening series. And the Blueshirts needed every one since they surrendered at least three goals in six of the seven games. After posting a 3.65 GAA and .909 save percentage in the opening round, Shesterkin had a nice game on Wednesday stopping 24 of 26 shots. And he wasn’t to blame on the OT winner that ticked off a teammates stick.

We expect close games in the series but we also anticipate more scoring than what we saw in the opener. Sure the clubs allowed fewer than 2.5 goals per game during the regular season but they also scored their share and both sides have a number of offensive weapons. They also played over the total in three of four regular season games with Carolina outscoring the Ranger 14-10 in those meetings.

And goals were plentiful in the first round. The Canes averaged 3.4 goals with the OVER going 5-1-1. The Rangers averaged 4.0 goals and were the best NHL odds pick going 7-0 against the OVER. And in the playoffs an unlikely hero could emerge. That was the case in Game 1 with Ian Cole netting the OT winner. Cole has more goals and points in the series than New York’s Artemi Panarin, Chris Kreider and Adam Fox, but that will change.

In today’s wide-open NHL the Rangers and Canes are throw backs. Game 1 felt like the teams were feeling each other out, which shouldn’t really happen since they played four times during the season and not a lot has changed. I do expect things to open up as the series moves along and while the Canes are stingy defensively Antti Raanta is no Patrick Roy. Raanta had good not great numbers during the season and was spotty in the first round. But he was at his best on home ice as were the Canes, and they will continue that run as my NHL consensus pick at Sugarhouse sportsbook in Game 2.