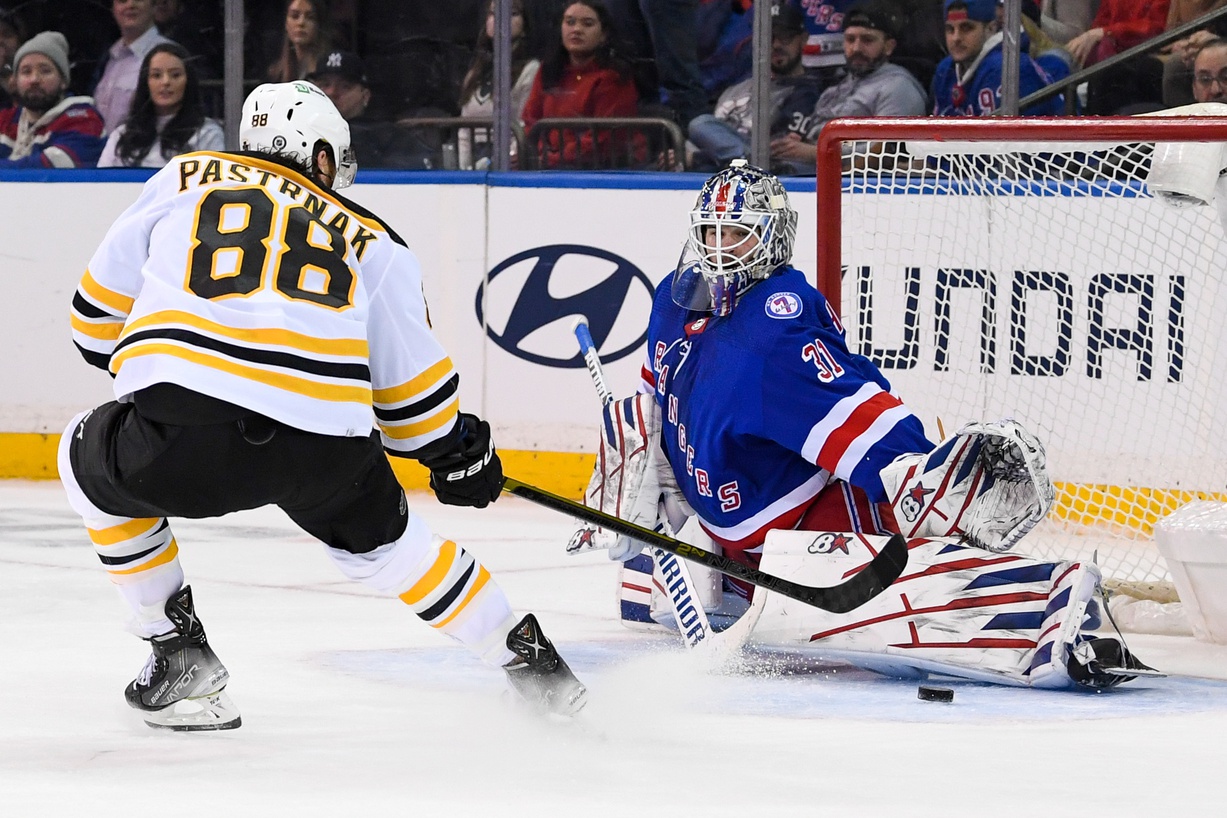 The streaking New York Rangers visit the Boston Bruins in an Original Six matchup on Saturday. Both teams are locked into the upcoming Stanley Cup Playoffs but where they end up in the Eastern Conference remains to be determined with a little over a week left in the regular season.

The Rangers tied Carolina for the Metropolitan Division by beating Winnipeg, 3-0, on Tuesday night. It was their third straight shutout and second in a row from Igor Shesterkin, likely cementing his spot as the Vezina Trophy winner. The win was also the sixth in seven games for New York where they allowed a total of two goals in their triumphs. This could potentially be a first round playoff matchup if the Bruins don’t escape the wild card slot. There’s a chance that can happen since they closed within a point of third-place Tampa Bay in the Atlantic Division with an overtime victory over St. Louis on Tuesday.

With the end of the regular season fast approaching a lot remains to be decided in the Eastern Conference. We know which teams will compete for Lord Stanley’s Cup we just don’t know who they’ll play. It’s easy to see why the Rangers are currently tied for the division lead. They have the best goalie in the league in Shesterkin and have allowed the second fewest goals in the NHL. That allowed this team to join elite company in franchise history. The Rangers reached the 50-win mark becoming just the fifth team in club history to do that. It’s also made them the most profitable NHL pick putting them up over $1500 on the moneyline.

The Rangers haven’t scored a lot of goals, but they don’t need to with the tandem of Shesterkin and Alexandar Georgiev in net. They average a smidge over three goals putting them in the middle of the NHL pack. They have one of the top point getters in Artemi Panarin, who’s tied for second in the NHL in assists and ranks among the top-10 in total points. And they’ve been strong on special teams with the fifth-best power play while killing over 82 percent of their shorthanded situations. Chris Kreider has a league-best 25 PPGs accounting for half his season total. In nine previous seasons he never scored more than 28 goals.

Despite a recent skid that saw the Bruins lose three straight and four of five, they’re still in the hunt to finish in the top three in their division. They lost games to Detroit as a -192 favorite and Ottawa where they were a -252 NHL odds pick. They had problems scoring goals during that time frame netting two in five consecutive games. Their 3-2 win over the Blues was the eighth straight failing to top that number putting the UNDER at 5-1-2 on the NHL betting lines over that stretch.

The loss of David Pastrnak, who was the team’s leading scorer at the time he was injured, has impacted the offense. The Bruins went 3-4 after in seven games without him averaging just 2.29 goals, which is nearly one goal per game below their season average.

Outstanding goaltending and a middling offense has the Rangers playing below the closing total a lot. They’ve been an NHL best pick on the UNDER going 45-29. New York has had the better of the series recently winning both games this season while allowing only three goals. They won in Boston 5-2 back in November and posted a 2-1 home win in February. Overall the Rangers have won three straight and four of the previous five encounters going up 560 units.

The Bruins need some offense and the hope is that Pastrnak adds a spark when he returns. He should be back in time for the playoffs, which would make a big difference if that opening series is against New York. His return would also affect Boston as an NHL Finals pick.

There’s still something at stake for both sides so this matchup should have a playoff-like atmosphere. And that usually means a tight-checking, low-scoring affair. The Bruins are also stellar defensively allowing 2.67 goals per game making the UNDER a NHL consensus pick at Sugarhouse in this matchup.