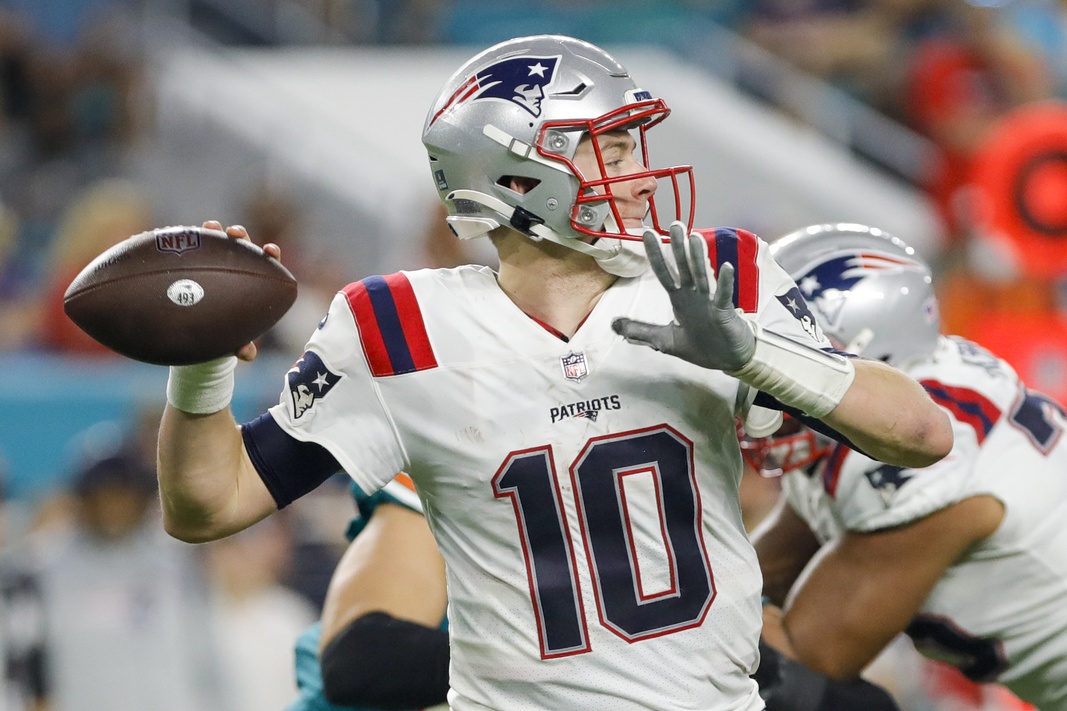 After a year hiatus, the New England Patriots returned to the postseason last year by compiling a 10-7 SU overall record that was good enough to land them a wild card slot. But did any NFL bettor truly take this team seriously with a horrendous passing attack in tow led by then rookie QB Mac Jones? The 47-17 playoff beat down at the hands of the aforementioned Bills was evidence enough to me that this franchise is a long way from competing for Super Bowl titles with the GOAT now doing his thing down in Tampa. Its 27.2 point per game scoring average (No. 6) was also fattened up by a pair of demolitions against the Jaguars and Jets whom they combined to drop 104 points on! As it is, the Pats (+2200) only sit ahead of the Raiders, Steelers, Jaguars, Jets, and Texans on the AFC title odds at FanDuel Sportsbook.

They’re also not being given much of a shot to win the division (+400). But should any of that prevent us from investing in their season wins total with New England either going over or pushing the number each of the last nine seasons? That all depends on whether you believe Jones takes a step forward in his progression with the front office bringing in some new additions both via the draft and free agency. “The Hoodie” also let it be known that the offense will look to throw more by removing any semblance of a fullback from the roster. It all sounds and looks good, but how will it play out on the field?

The Patriots haven’t seen a sub-nine win total since the early 2000’s. It was 2003 to be exact and the team went on to win 14 games along with its second Super Bowl of the Brady/Belichick era. That however is the case right now with the wins total hitting the board at a pedestrian 8.5; only higher than the Jets within the division. The betting markets have however flipped the vig in a big way. The under was heavily juiced initially, but now it’s the over garnering a bulk of the action.

The AFC East arguably possesses two of the best teams in the entire league. The shoe-in is the Josh Allen-led Buffalo Bills. They’re runaway favorites to win the division, and currently clock in as the frontrunner to win Super Bowl LVII. The surprising team in that mix is the Miami Dolphins. Like the Patriots, their success will ultimately hinge upon Tua Tagovailoa taking a giant leap forward with a greatly improved supporting cast. A huge litmus test matchup with the Fins in South Beach opens New England’s 2022 campaign.

The winner of that game will take a step forward in surpassing their respective season wins total. Half of their next eight games will come against teams currently favored to qualify for the playoffs. Following a Week 10 bye, the Patriots will split their final eight games both home and away with three opponents (Buffalo x2) favored to reach the second season. Unfortunately, New England is penciled in to partake in nine road games as opposed to eight at home. Per Sharp Football Analysis, the Patriots now face the league’s eighth toughest schedule after running up against the 15th toughest last season.

I wasn’t overly impressed with the job the front office did in the NFL Draft, and the free agent crop also leaves much to be desired. Many – including me - are still scratching their heads over that reach on Cole Strange in the first round. The losses of J.C. Jackson in the secondary as well as Shaq Mason and Ted Karras along the offensive line will be felt. Jakobi Meyers, Kendrick Bourne, and new acquisition DeVante Parker round out the wide receiving corps. Tyquan Thornton can run circles around anyone, but will he be able to adapt to the NFL game quick enough to make an impact his rookie season? While the 1-2 backfield punch of Damien Harris and Rhamondre Stevenson will leave opposing defenses bruised and battered, each must do a better job maintaining health after the injury bug forced each to miss games last year. The front seven will still bring it with Matthew Judon and second year stud Christian Barmore bringing the heat, but the secondary is now a concern.

You have to give the benefit of the doubt to Belichick for all the success he’s endured roaming the sidelines in Foxboro, but it’s viably apparent how crucial Tom Brady was to this franchise’s success since the turn of the century. I think it continues getting worse before it gets better and recommend hitting the under of the Patriots season wins total at FanDuel.