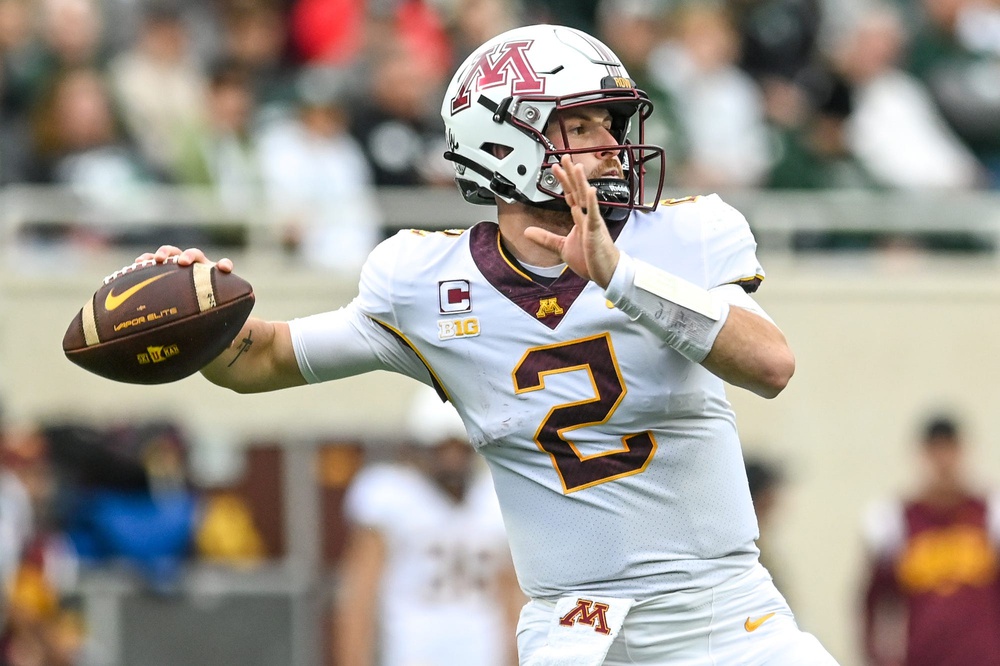 Minnesota Golden Gopher head coach PJ Fleck admits he is not for everyone. Certainly, Fleck has his slogans and gimmicks. But a deeper dive reveals his teams play good football and win. In 2019 Fleck led the Gophers to their greatest season since 1960. Now he has the best team in the Big Ten West division. Last week the Gophers curb-stomped the Michigan State Spartans in a decisive road win. Minnesota is a loaded team with plenty of experience. And Goldy Gopher is dreaming big.

The UCLA Bruins host the Washington Huskies in a Pac-12 game on ESPN. Kickoff from the Rose Bowl is at 10:30 p.m. ET. Washington opened as a -3.5 favorite.

It is hard to find a worse college football environment than the UCLA Bruins at home in the Rose Bowl. Social media posts show pictures of about 15 or 20 fans sitting at the 1000,000-seat grandaddy of them all. UCLA is a decent football team. But this week, they are stepping up in class against the reborn Washington Huskies.

First-year head coach Kalen DeBoer is leading a program renaissance. Washington has the most impressive metrics in a matchup of 4-0 teams. And blowout wins over Michigan State and Stanford.

The Minnesota Golden Gophers will host the Purdue Boilermakers in a Big Ten matchup on ESPN2. Kickoff from Huntington Bank Stadium is at Noon ET. Minnesota opened as a 12.5-point favorite.

Purdue has been a disappointment this year and is not playing at a level comparable to the Golden Gophers. Minnesota is a well-oiled machine that is stampeding all opponents. Coach PJ Fleck is not about to let up.

The Kansas State Wildcats will host the Texas Tech Red Raiders in a Big 12 matchup on ESPN+. Kickoff at Bill Snyder Family Stadium is at Noon ET. Kansas State opened as an 8-point favorite.

Last week Kansas State got one of the greatest wins in program history at the Oklahoma Sooners. In like manner, the Texas Tech Red Raiders scored an epic home win over the hated Texas Longhorns. This line is too high in a letdown spot for the Wildcats.

The Kansas Jayhawks will host the Iowa State Cyclones in a Big 12 matchup on ESPN2. Kickoff time from David Booth Kansas Memorial Stadium is at 3:30 p.m. ET. Iowa State opened as a 3-point favorite.

Iowa State is coming off a tough home loss to the Baylor Bears. Coach Matt Campbell’s Cyclones need a rebound win on Saturday at Kansas. The Jayhawks are in a dangerous letdown spot after beating the Duke Blue Devils in their biggest win and first sellout in several years.

The Arkansas Razorbacks will host the Alabama Crimson Tide in an SEC matchup on CBS. Kickoff at Donald W Reynolds Razorback Stadium is at 3:30 p.m. ET. Alabama opened as a 17.5-point favorite.

Last week Arkansas outplayed and outgained the Texas A&M Aggies. The Hogs should have won and barely lost despite numerous mistakes. This week brings a visit from the Alabama Crimson Tide. This price is out of sight. Upset Alert!

The Nebraska Cornhuskers will host the Indiana Hoosiers in a Big Ten matchup on Big Ten Network. Kickoff at Tom Osborne Field at Memorial Stadium is at 7:30 p.m. ET. Nebraska opened as a 6-point favorite.

Nebraska is coming off a bye week and has had two weeks to get used to interim head coach Mickey Joseph. Meanwhile, it's obvious that the Indiana Hoosiers were a fluke in 2020 and have regressed ever since. Nebraska will play hard for Joseph and new defensive coordinator Bill Busch. It’s homecoming weekend for the Big Red, and a reboot is in order.