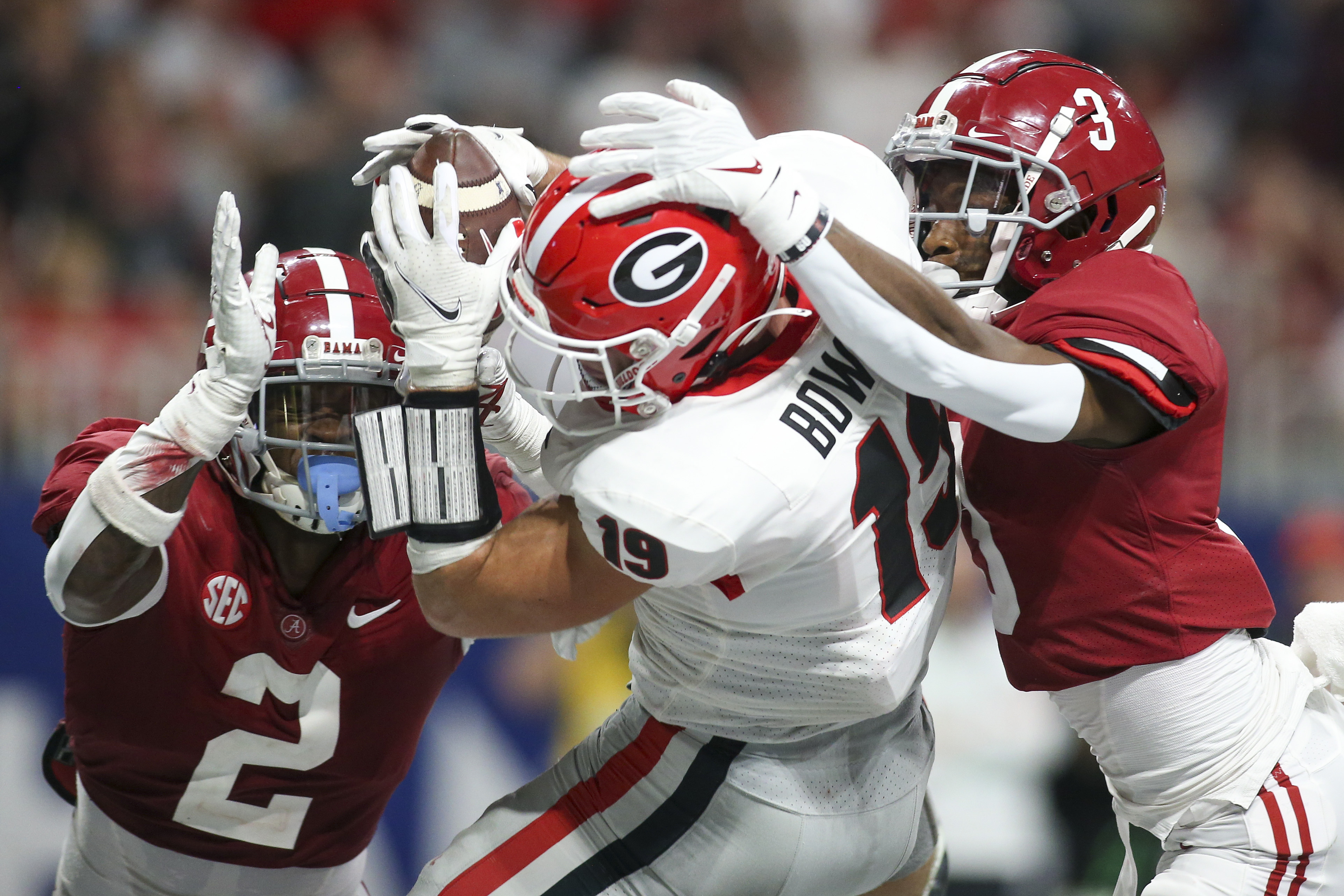 Scream, yell, rant, and rave about SEC fatigue all you like, but the fact remains that the two best teams in college football will be meeting in the national championship game. And the old BCS system is looking better by the day. Once again, we were treated to drudgery in the College Football Playoff semifinals. The Alabama Crimson Tide and Georgia Bulldogs routed their opponents for easy payouts with the College Football Odds. Now the Tide and Dawgs will meet for the second time in five weeks to determine the national title. On December 4, Alabama upset Georgia 41-24 to claim the SEC Championship.

On Monday, January 10, 2022, the Alabama Crimson Tide will face the Georgia Bulldogs in the College Football Playoff National Championship Game. Lucas Oil Stadium in Indianapolis, Indiana, is the host venue. Kickoff time is set for 8 p.m. ET with television coverage on ESPN.

Georgia opened as a 3-point favorite at the SugarHouse Sportsbook with a total of 52.5. The money line opened at Georgia -141 and Alabama +112.

On the whole, the Betting on College Football handle should be split evenly. For many gamblers, stepping into Alabama under any circumstances is terrifying. The Crimson Tide’s 41-24 win over Georgia as 6-point dogs in the SEC Championship game was a reminder of the danger of betting against Nick Saban. On the other hand, plenty of gamblers believe it will be difficult for the Crimson Tide to defeat Georgia in this rematch. Georgia won over many skeptics with their blowout win over Michigan in the Orange Bowl semifinal playoff game.

Alabama is coming off a 27-6 win over Cincinnati in the Cotton Bowl semifinal playoff as 12.5-point favorites. The game went under the total of 56.6. The Crimson Tide now has a College Football Betting record of 13-1 straight up, 8-6 vs. the odds, and 7-7 over/under the total. Alabama ranks 4th for scoring offense and 20th for points allowed.

Georgia mauled Michigan 34-11 as 7.5-point favorites in the Orange Bowl semifinal playoff game. The game went under the total of 46.5. As a result, the Bulldogs are 13-1 straight up, 9-5 against the NCAAF Betting Odds, and 6-8 under the total. UGA ranks 7th for scoring offense and 1st for points allowed.

Georgia Again Tries to Get Past Alabama to the Summit

On January 8, 2018, the Georgia Bulldogs seemed to have the national championship in hand with a 13-0 halftime lead over the Alabama Crimson Tide. Alabama was rendered helpless, forcing coach Nick Saban to make a desperate gamble. Saban replaced starting quarterback Jalen Hurts with raw freshman Tua Tagovailoa. And the rest was history. Tua threw for 166 yards and three touchdowns, including a 41-yard game-winning overtime TD pass to DeVonta Smith, as the Crimson Tide prevailed 26-23.

Eleven months later, the Dawgs and Tide met in the SEC Championship Game. Once again, Georgia seemed to have the game in hand with a 21-7 2nd quarter lead. Ironically, Jalen Hurts came off the bench for the injured Tua Tagovailoa to rally the Crimson Tide with two 4th quarter touchdown passes and a 35-28 win.

Based on this history, the Bulldogs face a potential mental block for this championship tilt.

Georgia may have a slightly better defense than Alabama, at least statistically. But the Crimson Tide shredded the Dawgs defense in the previous meeting. The difference-maker is Alabama quarterback Bryce Young. The Heisman Trophy winner has a 173.7 QB rating, 4503 yards passing, 9.2 yards per attempt, and a 46/5 TD/INT ratio. Young is a more dynamic quarterback than Georgia’s game-managing Stetson Bennett.

Nick Saban is poised for his 7th natty as Alabama head coach.