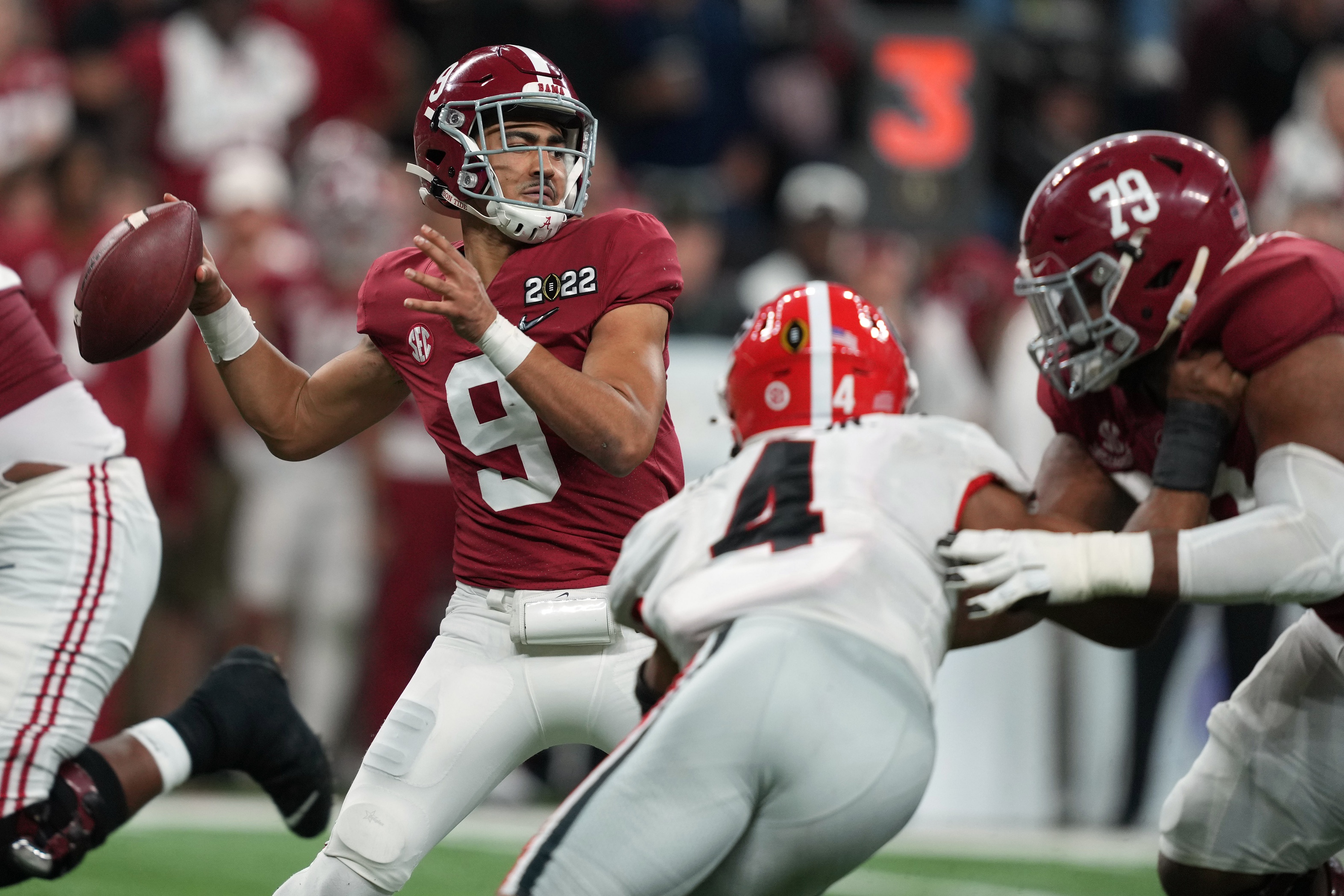 Though the 2022-23 college football betting season is still months away, it’s never too early to take a look at what the futures odds market looks like. While it’s way too soon to offer up my suggested favorite, underdog, and longshot selection to win it all, it’s the perfect time to see how the market has reacted to the offerings since first hitting the board at the conclusion of the 2022 title game that saw the Georgia Bulldogs storm back in the second half to oust the Alabama Crimson Tide. The odds below are the current pay rates for all teams currently listed at DraftKings Sportsbook to win the national championship. The purpose of this piece is to highlight some of the line moves to see which of the perceived “favorites” the market seems bullish on as well as the ones it’s a bit more bearish on. Heads up, there’s been very limited movement with kick-off of the 2022-23 season not until late-August.

Nick Saban has taken Bama to the College Football Playoff all but once since the four-team tournament kicked off back in 2014-15. Linemakers have last year’s runner-ups the current odds-on favorite to win it all. They hit the board at +200 and remain there with reigning Heisman Trophy winner Bryce Young back under center to lead the Tide’s offensive attack for at least one more season.

The reigning champs enter the year playing second fiddle to their hated rivals. They initially opened as +340 underdogs to pull the repeat, but the payoff now clocks in at +340 at DK with it even longer at some other places. Kirby Smart lost a ton from last year’s title team with a whopping 15 of his kids selected in the 2022 NFL Draft. Even so, the cupboard isn’t bare in Athens!

Had the Buckeyes not gotten their tails whipped by the Michigan Wolverines in their final game of the regular season, it likely would’ve been Ryan Day’s kids representing the Big Ten in the CFP instead of the maize and blue. Regardless, college football bettors like what they see from OSU with their odds shortening up from +500 to +450 - even without Garrett Wilson and Chris Olave!

It’s been awhile since CFB bettors were given better than 10-1 odds on the “Fightin’ Dabo’s” winning a national championship at the season’s outset. Last year was quite unlike any we’ve seen from the Clemson Tigers since the CFP came into existence. That being said, the team caught fire at the tail end of the season and returns a majority of those kids for this year. A 12-1 pay-off is enticing right now!

I had eyes for A&M making some noise last season. Unfortunately, injuries at the QB position killed off any shot of the team making some noise in the SEC. While they sprung the home upset of Alabama in one of the more entertaining games of the year, it all went for naught. With Haynes King back and healthy and Max Johnson brought in from LSU, there are no more excuses for Jimbo. It’s put up or shut up time! Even so, the market isn’t buying in with A&M’s odds of winning it all swelling to 28-1 from the +2500 opener.

Even with Lincoln Riley and Caleb Williams coming in from Oklahoma, a majority of the market has bypassed the Trojans. Of all the US regulated sportsbooks, only DK and PointsBet have the Trojans odds of winning it all at or close to the +2500 opener. The former has bumped USC up to 30-1 while PB has stuck at 25-1. Something tells me this payout is slashed come kick-off of the regular season!

The Sooners have failed to qualify for the College Football Playoff each of the last two seasons. With Riley now working on his tan in SoCal, the hope is that former Clemson defensive coordinator Brent Venables can get the program back to the Promised Land. Boomer Sooner has some rich talent to utilize in the forms of transfer QB Dillon Gabriel as well as stud WR Marvin Mims. But if OU is to really take a giant leap forward, it’s the defense that must rise to the occasion. I can’t think of a better coach to make that supposition become a reality! Regardless, Oklahoma’s odds have increased to +3500 from the 30-1 opener.

There was all kinds of fake news out there that had Jim Harbaugh returning to the NFL after his kids got shellacked by Georgia in the CFP semis. None of it come to pass. He’s back in Ann Arbor with longshot Heisman RB Blake Corum and QB Cade McNamara spearheading the offense. He also lost a couple impact players on the defensive side of the ball. As such, the Wolverines odds of winning it all have fattened up to 40-1 after initially hitting the board at 30-1. Of the perceived favorites, UM’s fall from grace is the biggest of the bunch!