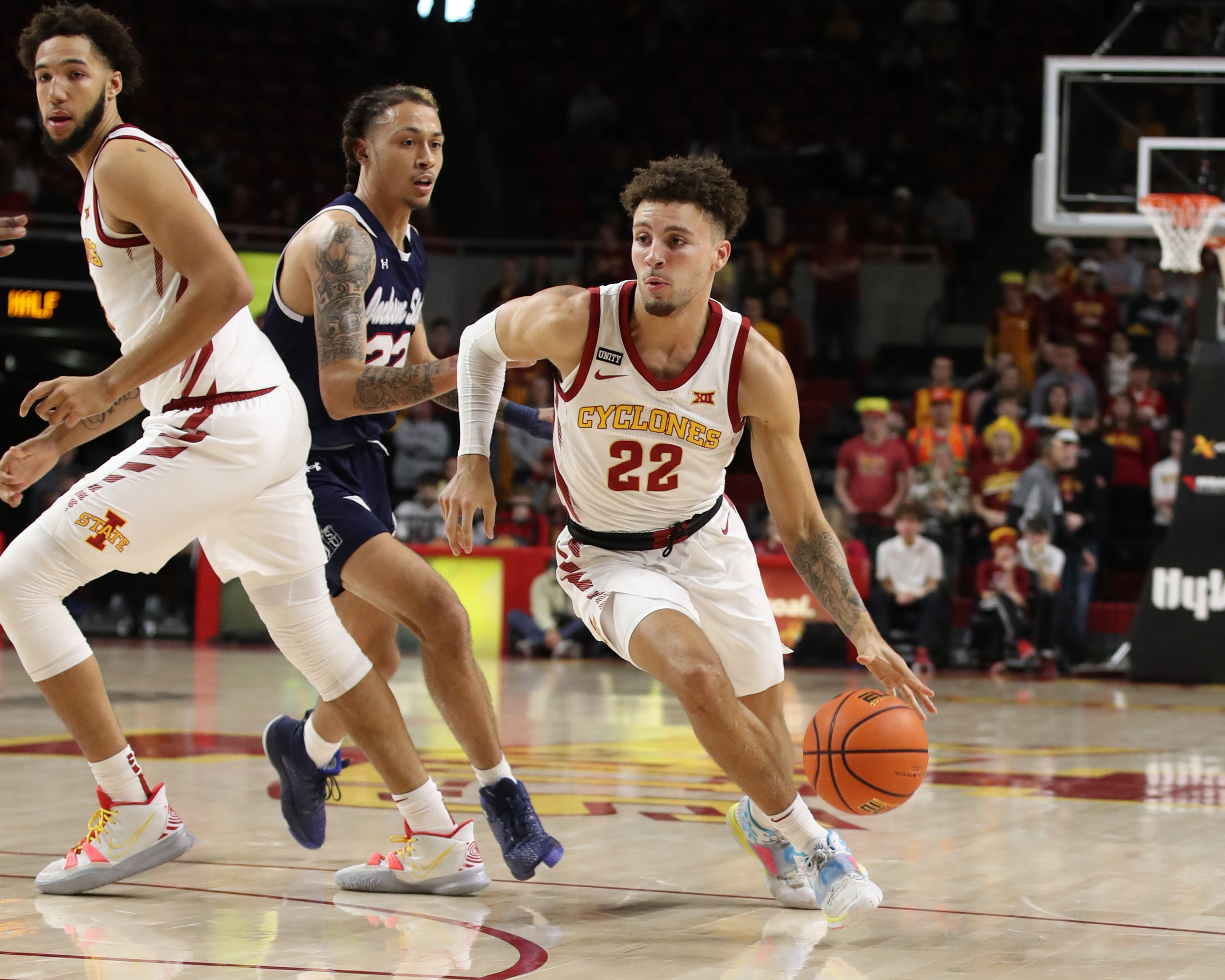 Most college basketball teams are close to wrapping up their respective non-conference schedules as the Christmas holiday nears. Conference challenges and early season tournaments are all but through as coaches and players prep for the next portion of their program’s slate.

We saw some big-time matchups over the last couple of weeks with a some notable blue bloods suffering defeats. We’ve watched Duke, Gonzaga, and Purdue fall from the top spot to this point. The reigning champion Baylor Bears now hold the No. 1 ranking in the AP poll.

When making your NCAAB picks, it’s important to look at who’s playing well and who’s in a rut. Check out this week’s edition of Hot and Cold at BetMaker.

The Cyclones have been on a tear, picking up 10 straight wins to start the season. That includes victories over No. 22 Xavier, Oregon State, Memphis, Creighton, and Iowa. With the big wins, they’ve moved up to No. 11 in the latest AP poll.

Not only have the Cyclones been winning on the court, they’ve also been beating the college basketball betting odds. Iowa State has won outright in each of its last four matchups as underdogs. A $100 bettor would’ve cashed in $1,185 had they taken the money line option on each occasion. The Cyclones are 5-2 against the spread in their last seven contests.

The Buckeyes are playing their best ball right now and taking down traditional college basketball powers in the process. Over its last six games, Ohio State has defeated No. 16 Seton Hall, No. 2 Duke, Wisconsin, and Penn State.

The Buckeyes are 4-2 against the spread in that time and they currently find themselves on a four-game winning streak. Up next will be a test versus the Kentucky Wildcats. Ohio State sits at No. 15 in the latest AP poll.

Xavier dropped a matchup to Iowa State earlier in the season but have since been on a five-game winning streak to move up to No. 22 in the polls. On the year, the Musketeers are 9-1 and they’ve picked up some massive wins along the way.

Xavier has taken down No. 15 Ohio State, Virginia Tech, Oklahoma State, and Cincinnati, winning three of those contests as underdogs. They’re 8-2 against the spread this season with a matchup against Morehead State looming. The Musketeers enter as 15.5-point favorites at SugarHouse online sportsbook.

The Hawkeyes are struggling having dropped each of their last three contests. That includes a blowout loss to archrival Iowa State last week. Iowa seemed primed for a run after taking down Virginia at the end of November but the turn of the month hasn’t been kind.

The Hawkeyes have lost their last two games to the Cyclones and Illinois despite entering as favorites. They also fell to No. 3 Purdue earlier in the month. Iowa will try to get back on track in a meeting against Utah State, a team that already owns a win over Big XII opponent Oklahoma.

Nebraska is going through an absolutely brutal stretch in December and is finding success tough to come by. The Cornhuskers have faced off against NC State, Indiana, Michigan, and No. 13 Auburn in the last two weeks, all of which have been losses. The last two games have been decided by more than 30 points.

While the ‘Huskers have entered each of those matchups as underdogs, they’ve failed to cover large lines on three of those occasions. Nebraska is just 4-7 against the spread this season. Things don’t get any easier with a meeting versus Kansas State on deck.

The Seminoles have been disappointing to this point, limping out to a 5-4 start. A preseason ACC power, Florida State has lost each of its last three games against No. 3 Purdue, Syracuse, and South Carolina. The loss to the Gamecocks saw the Seminoles blow a 16-point first half lead to lose 66-65.

Florida State has failed to cover the spread in their last four games, losing outright in their last two outings as betting favorites. Up next is a matchup with Lipscomb as they look to get back on track before ACC play.