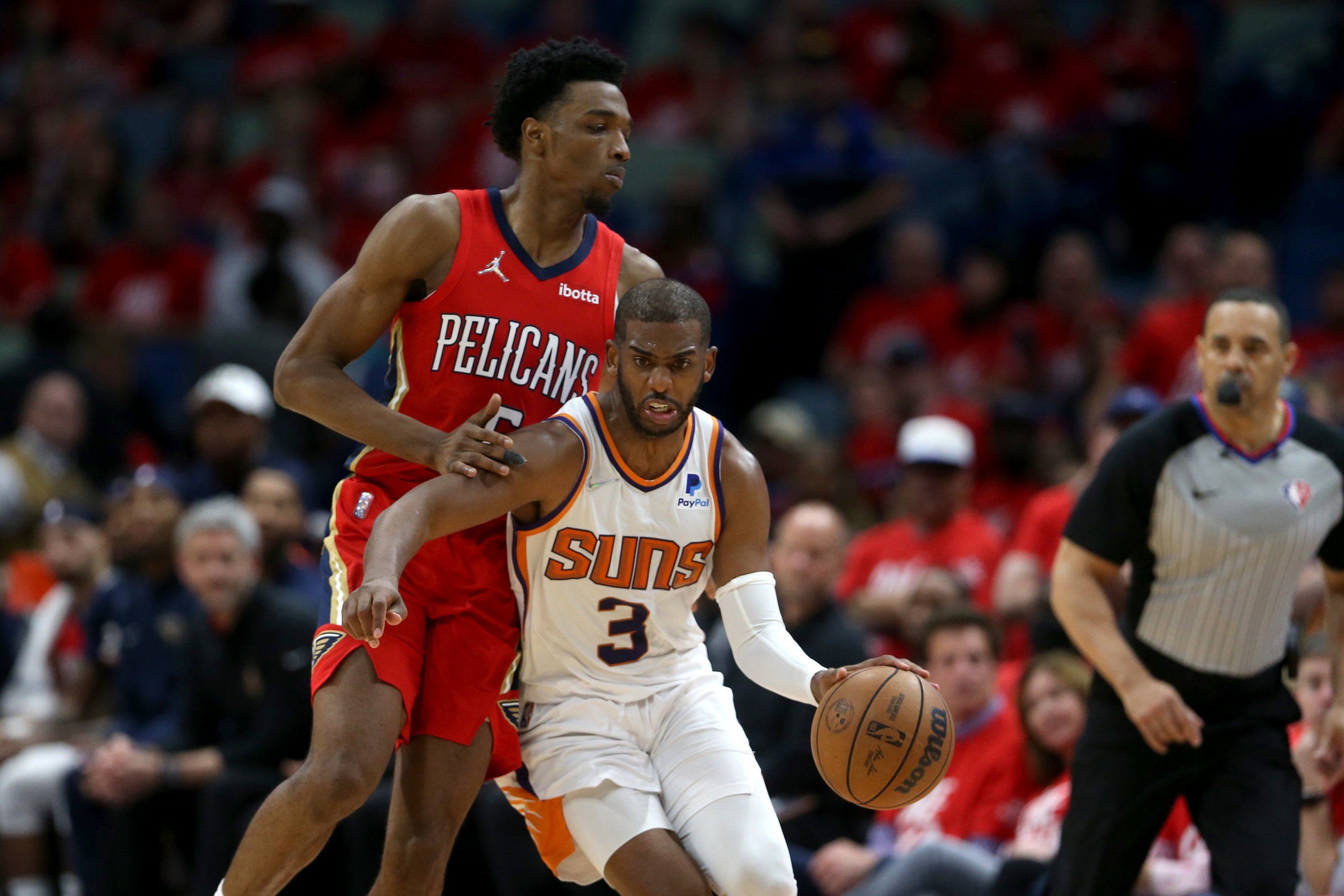 The best-of-7 first round NBA playoff series between the top-seed Phoenix Suns and No. 8 New Orleans Pelicans is now a best-of-3. I don’t think many pundits out there expected the Pels to win one game let alone two. And they certainly didn’t pick them to win the series. But here they are loaded with confidence after taking down the best team in the NBA during the regular season 118-103 on Sunday sending the series back to the Arizona desert knotted at 2-games apiece. The top NBA Finals pick when the playoffs started, the Suns have dropped down the betting board after splitting the first four games with a team that finished the regular season with 28 fewer victories.

You have to feel as though the Pelicans are playing with house money. With nothing to lose they are letting things play out and so far it’s been a good and profitable postseason. They had to win two play-in games to qualify for the playoffs, knocking off San Antonio and the Clippers on the road. They got a split in Phoenix winning Game 2 125-114 as a 9.5-point dog putting them at 4-2 as an NBA pick against the spread this postseason. They have had some good fortune, though. The Clippers were without Paul George in their play-in matchup and the Suns will likely be without leading scorer and former NBA first round pick Devin Booker for the remainder of the series. The Pels have taken advantage outscoring the Phoenix by an average of 3.0 points through the first four games.

The Suns dealt with injuries and players missing games due to COVID all season, but the loss of Booker has been more challenging. They got through a long stretch of games when Chris Paul was out with a hand injury and still finished the regular season with eight more wins than the second-best team. One reason the Suns had the best record in the NBA was their ability to avoid losing streaks. They never lost more than two games in a row with nifty 15-4 SU record following a setback. There are reasons for it, but the Suns have been average since the start of April going 4-6 SU and as an NBA point spread pick.

Hats off to the Pelicans, who actually believe they can win after leveling the series with a 118-103 victory in Game 4. Brandon Ingram has been a huge reason why supplying plenty of offense for a team that finished 21st in scoring with an average of 109.3 points during the season. Over the last three games of this series the Pels averaged nine points per game more than their regular season number playing OVER the total as a NBA over/under pick. Ingram scored at least 30 points in all three games averaging 33.7 points during that span.

It also helped on Sunday that the Pels had a huge advantage at the free throw line. Wanting to be the more physical team usually has the opposite effect, but the Pels used the disparity at the stripe outscoring Phoenix by 22 points. They were 32 of 42 at the line while the Suns were just 10 of 15. And what the Pels have now is a boatload of confidence, though history isn’t on their side. In 29 previous series where one team had at least 25 more wins than its opponent, the team with more victories won 28 times.

You don’t win a franchise record 64 regular season games only to succumb to a team that wouldn’t have been in the postseason if not for a run through the play-in tournament. The Suns are making things interesting, though. And they just haven’t looked the same for the last month. They closed the regular season losing four of their last six games, though they had the top-seed locked up. And they’ve been outscored by 23 points in the last three games of this series, which includes a win. That’s alarming for a club that led the NBA in point differential.

I expect the free throws to even out on Wednesday with the Suns likely getting more attempts. That’s usually the case in the NBA following a game with such a disparity in attempts. It’s not like the teams did anything different. After a scintillating fourth quarter in Game 3, Chris Paul was held scoreless over the final 12 minutes on Sunday scoring only four points in the game. And he didn’t attempt a free throw.

Most NBA betting sites have caught up with the Pelicans, listing them as a 6.5-point dog on the opening line. They were catching 9.5- and 10-points in the first two games making this a good time to back the home team. The Suns aren’t going to get outscored by 22 points at the free throw line and they will match the Pels’ intensity now that the series has tightened up. I’ll give the points and take Phoenix as my NBA pick of the day at SugarHouse sportsbook.