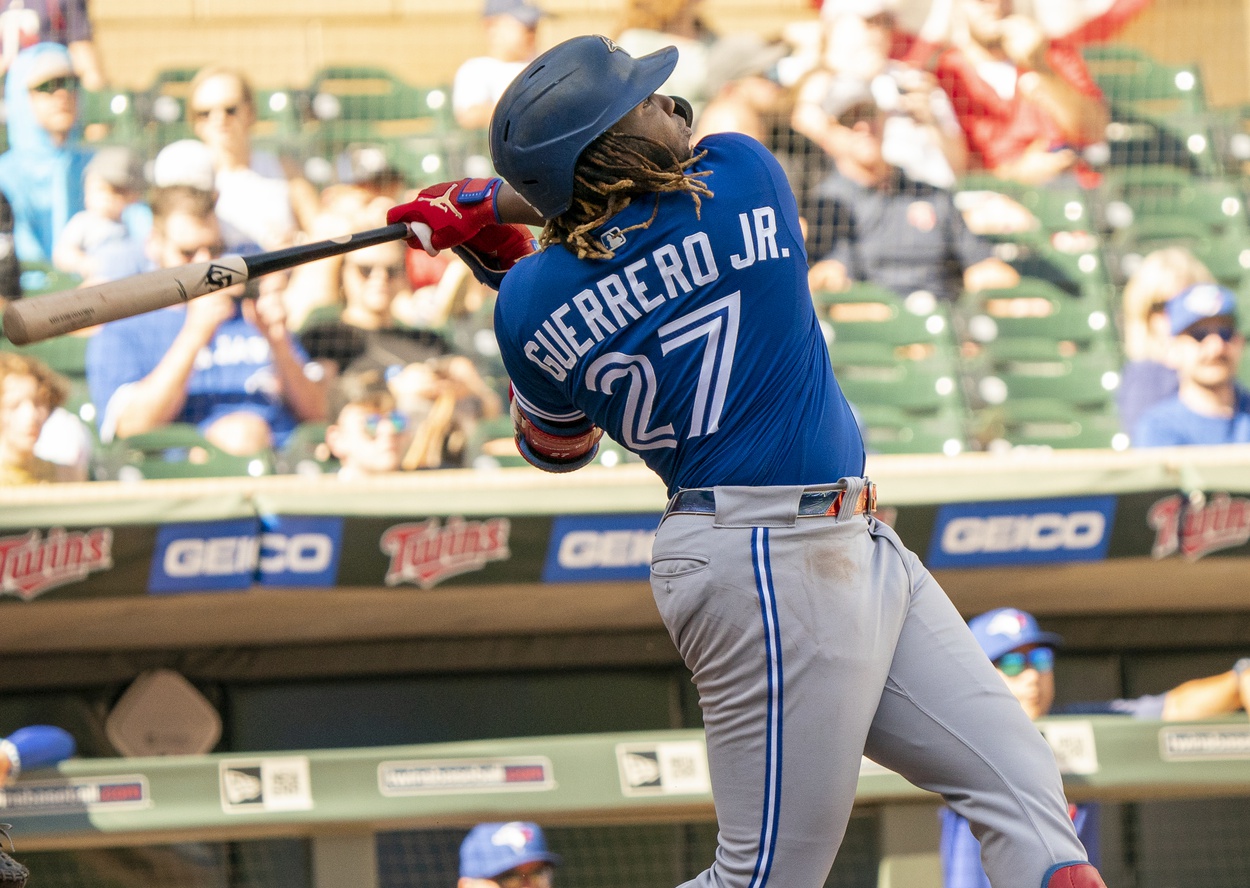 Chicks dig the long ball; so they say. You know who else enjoys watching moonshots reach the cheap seats? MLB and player prop bettors who make a living off it on a daily basis from April through October. And don’t forget about those fantasy baseballers! A pair of American League bats put on a show last season when Vlad Guerrero Jr. and Salvador Perez led the league with 48 bombs apiece. The Kansas City backstop’s showing came as quite the surprise considering he never hit more than 27 home runs in his nine previous seasons. The 48 from Jr. was his coming out party, and I’m thinking even more will be in store for the young slugger in the years ahead. But will 2022 be that year? SugarHouse Sportsbook certainly seems to think so with the Blue Jays first baseman the odds on favorite to hit the most home runs entering the baseball betting season. Stock should be purchased on big bad Vlad, but I’ve got my eye on some other sticks in attractive lineups that offer up more favorable rates of return. The following are my favorite, underdog and longshot selections to hit the most home runs this upcoming season – Play Ball!!!

The Mets first baseman is yet to live up to his insane rookie season that saw him blast 53 home runs, plate 120 ribbies, and rack up an insane .583 slugging percentage. An effort that earned him Rookie of the Year honors. After an injury plagued 2020 that was marred by COVID, he got back to his old self a bit last season by racking up 37 home runs and dramatically decreasing his strike out rate. While the latter might’ve played a role in the fewer long balls, I’m thinking it might just set him up for greatness moving forward. Batting cleanup with speedsters Brandon Nimmo, Starling Marte, and Francisco Lindor ahead of him, opposing pitchers will likely be throwing at him with ducks on the pond with regularity. While that bodes extremely well for his counting stats, it also bodes well for his home run tally with that trio wreaking havoc on the base paths. Look for Pete Alonso to punish any and all mistake pitches and be in the running for the HR title all season long!

White Sox fans were deprived of Eloy’s second full season when he suffered a brutal injury in spring training that cost him four-plus months. While he wasn’t nearly himself after returning, Jimenez still went on to hit 10 into the cheap seats and plate 37 runs. The effort nearly mirrored his 2020 campaign. Extrapolate that out to a full campaign, and it was right in line with his rookie season that saw him go yard 31 times with a .513 slugging percentage. While health remains a concern – how could it not as injury prone Jimenez has proven to be in his three seasons – the talent is there for Chicago’s leftfielder to take a gargantuan step forward in 2022. The Palehose lineup is loaded; he just so happens to nestle into the five-hole ahead of a number of high on-base percentage guys. The kid is only 25 and in the prime of his career. Not many barrel up a ball better than Eloy Jimenez. Cub fans are yet to see exactly what they gave away for Jose Quintana. I’m thinking reality sets in this upcoming season.

Entering the tenth year of his career, Castellanos has played the role of Rodney Dangerfield to a “T” in that he gets absolutely no respect. This is a guy that’s swatted 168 home runs over the course of his career, and comes off a season in which he hit a career-high of 34. That was backed up by a .309 batting average and .362 on-base percentage; also career-highs! Why on god’s green earth is this cat always being traded and or on the market in free agency. He’s one of the biggest gamers in the league and deserves a home. Luckily for the Philadelphia Phillies, they made that statement a reality by inking him to a 5-year contract for $100 million shortly after the lockout ended. With the other additions made this offseason, I’m thinking Philly is now the owner of a scary good offense. He’s going to absolutely love hitting in Citizen’s Bank Park where he owns a career .607 slugging percentage through just 28 total at-bats. For the life of me, I can’t figure out why he’s being offered up at 66-1. This pay-off will look foolish come June!