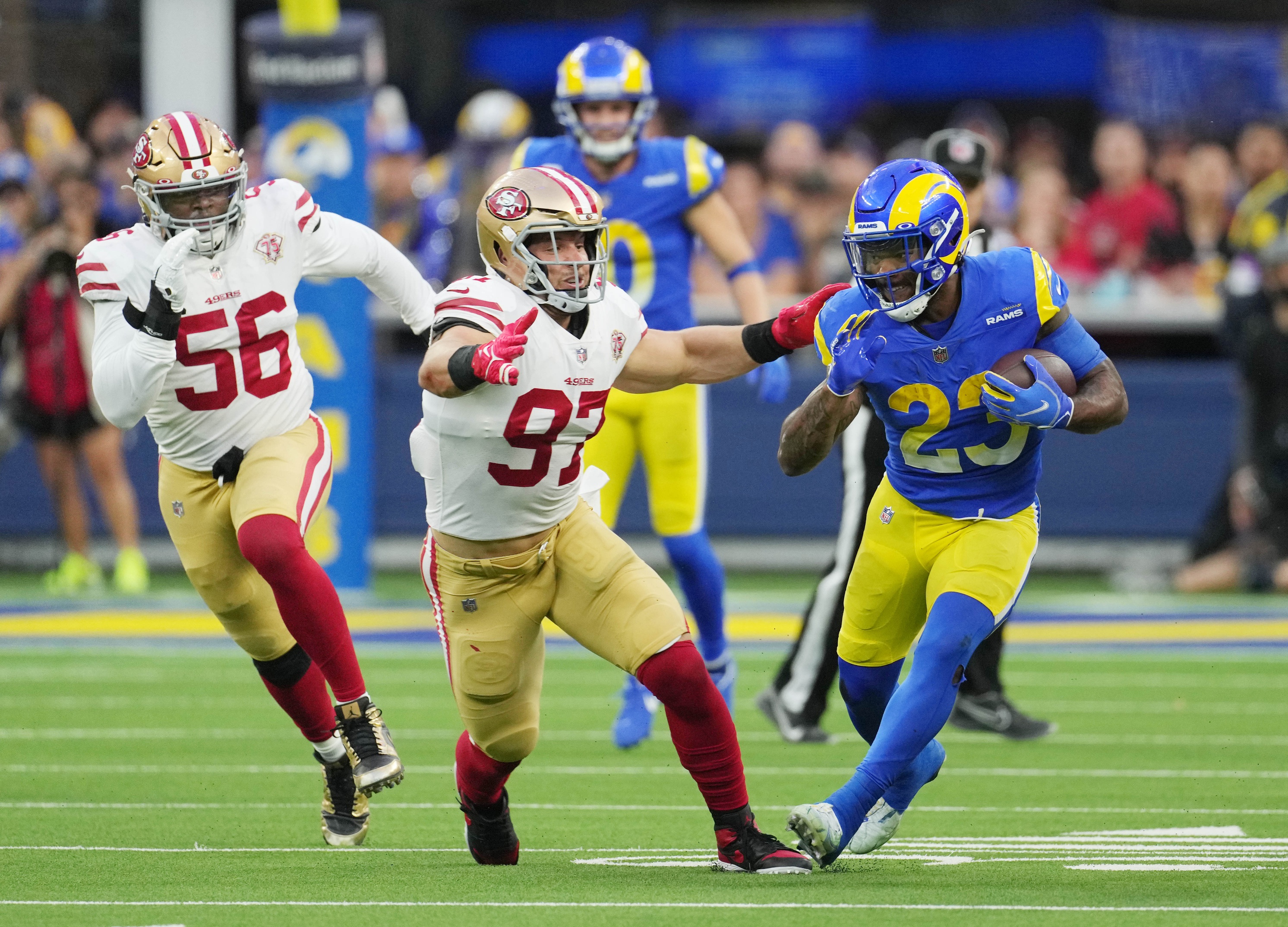 We’ll have a huge divisional matchup on Monday night as NFC West foes Los Angeles and San Francisco face off. The Rams enter at 2-1, having won two straight after a season-opening loss to the Bills. They’re hoping to repeat as Super Bowl champs in 2022.

The 49ers, meanwhile, are 1-2. San Francisco has already needed to make a change at quarterback with starter Trey Lance getting hurt. That season-ending injury has led to Jimmy Garoppolo getting the nod under center, the passer that led the 49ers to the NFC Championship last year.

Which of these rivals will leave The Bay with a win?

The Rams enter this matchup boasting one of the better offensive units in the NFL. Outside of being stonewalled by Buffalo, the Rams have been productive. They scored 20 points in a win over Arizona last week, and 31 in a win versus Atlanta. In all, LA is averaging 20.3 points and 326 yards a game.

Unfortunately, the defense has been lacking, which is a surprise in Los Angeles. The Rams allowed totals of 27 and 31 to the Falcons and Bills before looking much better in last week’s 20-12 win. They’ve surrendered 368 yards and 23 points per game. They’ll need to step up, particularly on the back end, if they want to leave San Francisco with a win.

The 49ers have been quite the opposite. The defense has led this team, allowing just 12 points per game over the first three matchups. San Francisco has held opponents to just 246 yards an outing, and they’ve yet to allow 20 points in a game. Unfortunately, the offense hasn’t lent much help.

The 49ers have been held to just 10 points in two of their three games. They’re averaging 16 points a contest thanks to a 27-7 win over Seattle in Week 2. Last week saw the defense give the offense chance after chance, only to see the offense fail in an 11-10 loss at Denver. If the offensive struggles don’t get figured out, it will be tough sledding against LA.

San Francisco enters as the favorite at home, with the line sitting at -1 in favor of the Niners. The Rams are slight underdogs while holding +104 money line odds. The over/under is set at 42.5 points.

The 49ers are 1-2 ATS this season, covering in that 20-point win against the Seahawks. They’re 1-2 as a favorite, too, after entering each of their first three games expected to come out on top according to the Vegas lines.

The Rams are also 1-2 ATS, with their lone cover coming last week against Arizona. Los Angeles is 0-1 as an underdog after getting crushed by the Bills in Week 1. On the road, LA is 1-0 ATS.

Two of three Rams games have fallen under the 42.5-points total projected for Sunday while all three of the 49ers’ games have done the same. San Francisco has covered each of the last five meetings between these two teams, winning outright as underdogs in four of those five. Los Angeles won the last game in the series in last year’s NFC Championship, 20-17. The under is 4-1 in those five games.

The Rams’ have four defensive backs listed as questionable for the matchup.

These two typically play close with four of the last five games being decided by one score. Three of those games were decided by a field goal. This will be the first time in five games that the Niners enter as favorites.

They’ve seen success at home in this series, winning each of the last three matchups. That streak ends on Monday, as we expect the Rams to leave with a victory. While San Francisco’s streak ATS ends, the trend of the underdog covering continues.