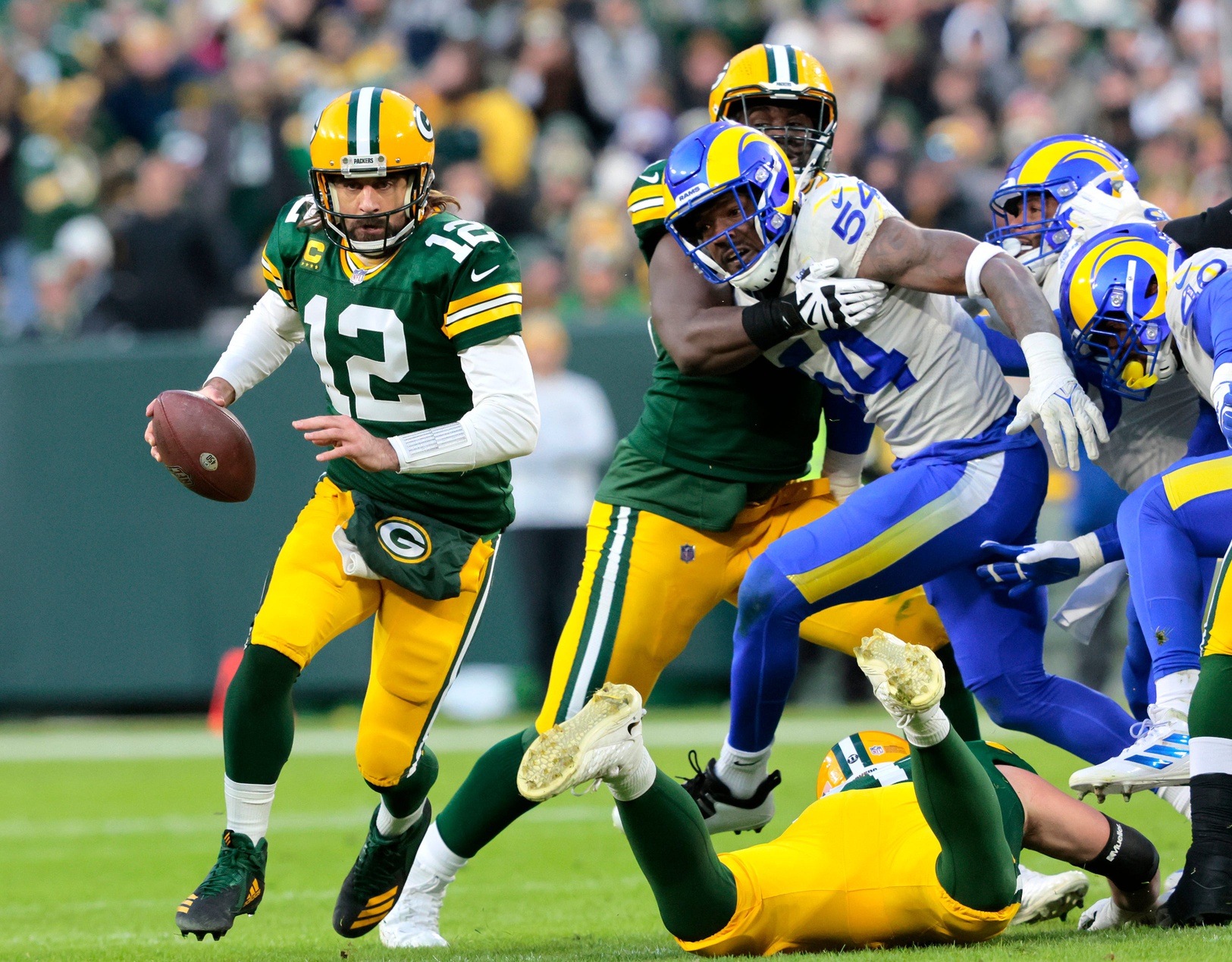 The defending Super Bowl champions will not be able to play for the Lombardi Trophy in two months. However, the Los Angeles Rams can play spoiler the rest of the way and did so against the Las Vegas Raiders on Thursday Night Football last week. Baker Mayfield led the Rams to an improbable comeback victory, essentially knocking the Raiders out of the postseason. Mayfield can ruin another team’s season this week if the Rams beat the Green Bay Packers on Monday Night Football.

Although the Monday Night Football showdown between the Green Bay Packers and Los Angeles Rams isn’t as important as it seemed at the start of the year, it still matters a lot for the Packers. They play three of their last four games at home, and they likely need to win all four games if they hope to sneak into the playoffs. These teams will meet on Monday, December 19, 2022, at 8:15 p.m. ET on ESPN from Lambeau Field in Green Bay, Wisconsin.

Flags fly forever, but the Los Angeles Rams are experiencing a little buyer’s remorse with Matt Stafford now. Stafford was not great in nine games this season, and he has been shut down for the remainder of the year. Meanwhile, Jared Goff is lighting it up in Detroit with a group of talented, young receivers, and he could be poised to lead the Lions to the playoffs.

Mayfield brought some excitement back to this team and put a halt to a six-game losing streak. That led to Sean McVay announcing that Mayfield would start the rest of the season, and this might be the last chance for the former No. 1 overall pick to prove he deserves to be a starting quarterback in the NFL.

Unfortunately, he doesn’t have the cream of the crop to work with in this offense. Cooper Kupp and Allen Robinson II have both been shut down, and the ground game is one of the five worst in the NFL. Tyler Higbee is an above average tight end, but Ben Skowronek and Tutu Atwell are essentially Quad-A receivers.

Green Bay’s defense has been below average this year. Rashan Gary was having a breakout year before he suffered a season-ending injury, but a lot of other big-name players are having subpar seasons. The secondary is banged up with Eric Stokes on injured reserve and Darnell Savage questionable to play, so the Rams could have some success in the passing game.

Aaron Rodgers is having one of the worst years of his career. Rodgers has been one of the NFL’s best quarterbacks for more than a dozen seasons, but he is a league average signal caller this season. Rodgers is completing just 64.3% of his passes for 2,864 yards (6.8 YPA) with 22 touchdowns and nine interceptions. Some of that has to do with his new receivers, but some of that also has to do with Rodgers simply not playing as well as he had in the past.

The good news is that this offense has looked better in recent weeks. Rodgers is developing a rapport with second round pick Christian Watson, and fellow rookie receiver Romeo Doubs might be ready to return from injury. Allen Lazard has been a reliable mid-tier option, and the ground game has been superb. Aaron Jones and A.J. Dillon have been a potent one-two punch.

The Rams have three future Hall of Famers on defense. Aaron Donald, Bobby Wagner, and Jalen Ramsey are all elite players, but Donald sat out last week and might not be available on Monday night either. Wagner has shown his former team that he still has a lot left to give at this level, while Ramsey is one of the finest cornerbacks of his generation.

Green Bay seems to be the play at first glance, but the Packers are not the team they were the last few years. The Rams stand a very good chance of keeping this one within the number.