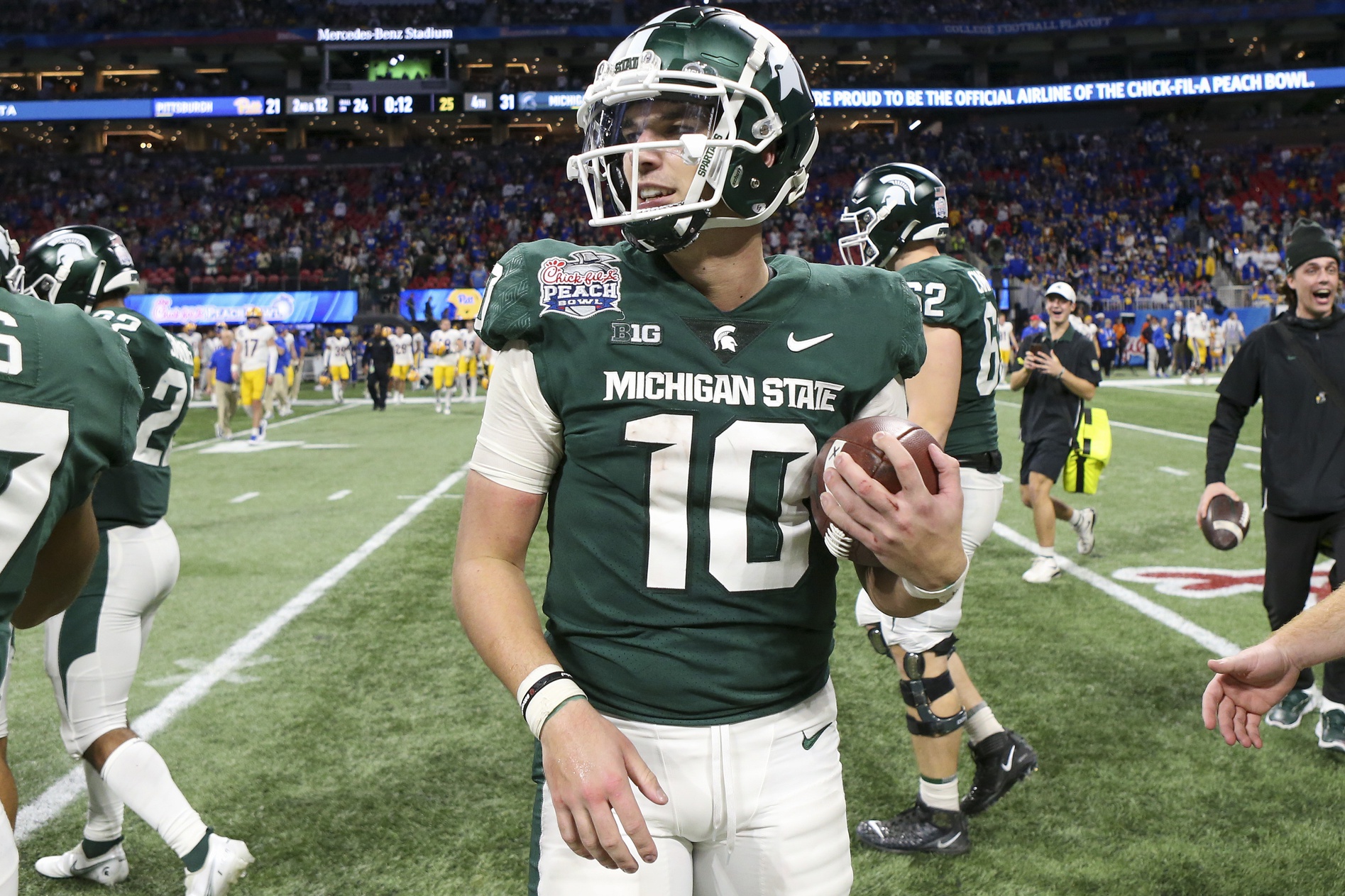 The Michigan State Spartans proved to be one of the biggest surprises in college football betting a season ago. BetRivers Sportsbook only expected Sparty to log a total of five wins, but Mel Tucker’s kids would go on to shock linemakers and tally 11 overall, which included a 31-21 win and cover over the Cody Pickett-less Pittsburgh Panthers in the Peach Bowl.

Also included in the memorable campaign were wins against Miami, Michigan – for the second year in a row – and Penn State.

It proved to be a major moneymaker for point spread bettors along the way, ultimately cashing in nine times. Four of the five times MSU went off the board installed underdogs, it won outright! So what are we to expect in year three of Tucker’s regime? I’m expecting nothing less than another season of grit and determination to be put forth by the kids from East Lansing.

Enough to the point that I’ll hit the over of their season wins total and back it up with a beer money investment to win the B1G at 27-1.

As great a season 2021-22 proved to be, the Spartans still got their tails whipped by the Ohio State Buckeyes. The 56-7 beatdown let it be known that there was still much work to be done in order to punch a ticket to the College Football Playoff for the second time in program history.

The Big Ten East is expected to be dominated by OSU, who came up short last year after falling to the Wolverines in Ann Arbor. They decided -500 chalk represent the division in the big game. You’ll find MSU’s offering following Penn State and Michigan. Their number clocks in at +1600 and falls off dramatically after them.

For Michigan State to have any shot of exceeding a win total 2.5-games higher than a season ago, the players that came in from the transfer portal, as well as the holdovers and those waiting in the wings, all must get on the same page; quickly! This could be a better team than last year, but it might not reflect in the overall record with the schedule of a much tougher variety this time around.

I really like some of the pieces brought in for the upcoming season. It was all about Kenneth Walker last year, with the running back proving to be the centerpiece of the offensive attack. He’s now backing Rashaad Penny up in Seattle.

In order to make up for his absence, both Jalen Berger and Jarek Broussard were brought in via the portal. The former was a highly touted recruit that didn’t pan out for Wisconsin, while the latter won Pac-12 Offensive Player of the Year Award honors toting the rock for the Colorado Buffaloes back in 2020.

An experienced left side of the offensive line was made nastier with G Brian Greene coming in from Wazzou. This all sets up very nicely for QB Payton Thorne who threw for over 3,200 yards and a 27:10 TD/INT ratio.

The last glimpse of him saw him throw for a season-high 354 yards and 3 TD with Walker sidelined for the Peach Bowl.

Should the junior come into his own in 2022, the offense will have something cooking with him getting the benefit of tossing to standout B1G WR Jayden Reed, who will attempt to surpass the 1,000-yard receiving plateau once again in his senior campaign.

As great the offense could be, none of it will mean much of anything should the pass defense put forth another effort as it did a season ago. Michigan State was flat-out laughable in attempting to defend opposing passing attacks by conceding nearly 338 yards per game (No. 130).

If nothing else, the unit returns experienced and got big jolt of talent with CB Ameer Speed coming in from Georgia. Should this embarrassed unit find a way to put forth league-average outputs at worst, the defense will be in good shape as a whole with a bulk of contributors returning that led the Big Ten in sacks and accrued the second most tackles for loss.

Though the schedule looks to be much tougher on paper and those three games to close out October against Ohio State, Wisconsin, and @Michigan look to be a chore, I believe there to be more than enough talent present to give the Buckeyes a run for league honors and surpass their wins total at BetRivers in the process.