How to Bet Darts 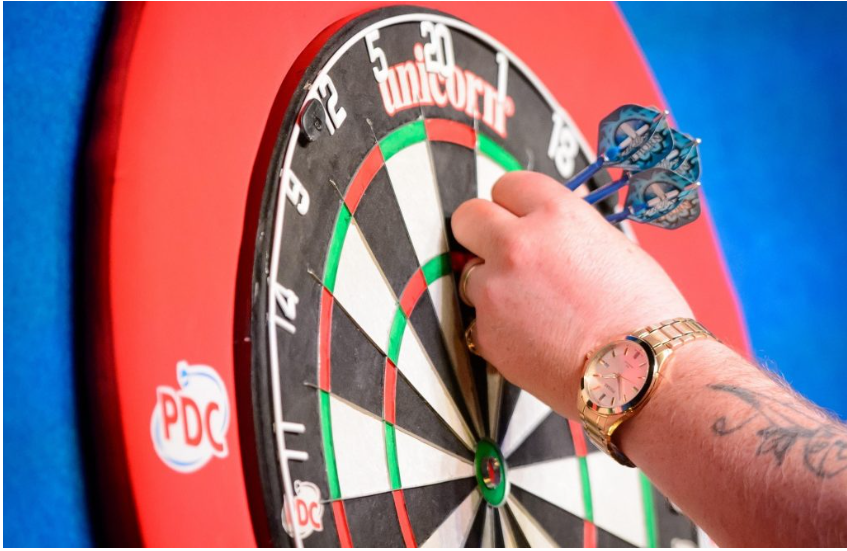 Most of us have at one point picked up a dart and chucked it wildly at the board trying to nail a bullseye. It may have been with your buddies at the local watering hole or in the basement of your parent’s home during a Holiday get-together. But have you ever tried to grasp the rules and scoring of a darts game? Chances are probably not since the game is played competitively among a small percentage of the population. Just because not a lot of folks play the sport doesn’t mean it isn’t hugely popular. It is, and with its increased popularity has come opportunities to wager at sportsbooks that post a line.

We could write a novel about the game and its different types of methods and scoring. For the sake of this article we’ll keep it to the basics. And since sportsbooks don’t offer odds on the weekend competition at the corner pub, we’ll explain the rules and scoring for games within the two professional steel-tip organizations – the British Darts Organization and the Professional Darts Corporation. The two organize their own tournaments and World Championship, which nearly every sportsbook posts odds for.

The game is rather simple: players throw a missile, or dart, at the board in order to accumulate points. But, the dart board is a circle of colors, numbers and wire. The standard board is divided into 20 numbered sections with wire running from the middle circle to the outer wired edge. Inside the board more circular wires divide each scoring section into single, double, and triple point values.

A standard game is between two players alternating throws of three darts each. When completed the players pull their darts and continue until the leg has a winner. In tournament competition players start with 501 points and the number is reduced by the amount of points on each throw. The kicker is that a player must land on zero with the final throw by either hitting a bullseye or a double number. If a player goes below zero or hits zero without throwing a double, the score reverts to the value before the turn.

A match is played over a fixed number of games, known as legs, with nine being the most common. In this scenario a player needs to win five legs to win the match. Keep in mind that these numbers aren’t set in stone and there are a number of regional variations on the standard laws and scoring systems.

Whew. Now that the basic scoring and rules are out of the way, let’s see how to make money betting on darts. As with most games, the easiest and most common form of betting is a straight up money line winner. You’re just throwing down on who you think is going to win the match. In some instances this isn’t a fair fight. There a handful of players who have done a majority of the winning in big tournaments and they are always a heavy favorite with little value on the betting line.

One way to overcome that and take advantage of a particular player’s skillset is to take a risk on the final leg count. This option is offered at certain shops and comes with better odds for a higher payout. It’s more difficult, but paying attention to recent scores and historical matchups gives you some insight.

Some sports refer to it as handicap betting, but it’s also similar to a spread bet in football or basketball. Betting a favorite to cover the spread has better odds than a money line wager. It also gives the underdog a chance to cover without actually winning the match.

Contrary to popular belief a bullseye isn’t the highest score on a dartboard. Hit the triple 20 and you have a score of 60 on one throw. Three triple 20s on one turn is the maximum and some sportsbooks offer a total on the number of 180s in a match. Find out how many legs are played in a particular match, research the players and come up with a number. Depending on where your number falls compared to the sportsbook you can either bet the over or under.

Darts markets are untapped giving you a nice opportunity to cash in. Researching and planning are essential, though, to becoming a successful bettor.