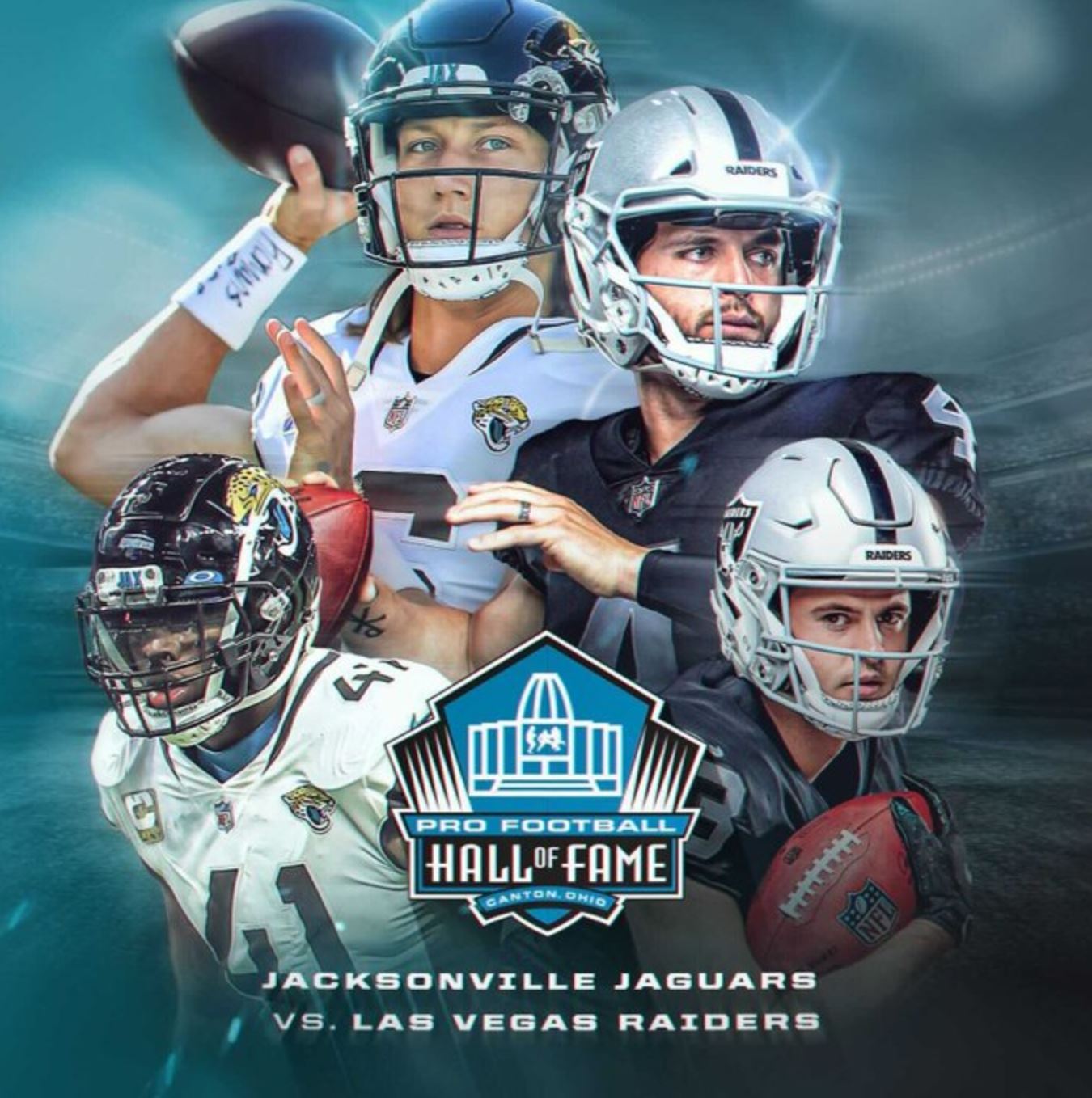 The 2022 NFL preseason kicks off on Thursday night on NBC, as the Jacksonville Jaguars play the Las Vegas Raiders in the Hall of Fame Game. While it is great to see NFL action once again, this really isn’t much more than a glorified scrimmage. Most starters will see limited action or won’t play at all and the play calling will be very vanilla. The Raiders will be playing in the Hall of Fame Game for the third time and they won their previous appearances. Jacksonville starting quarterback Trevor Lawrence won’t play, and his backup C.J. Beathard is also out. That will mean a lot of Jake Luton at quarterback for the Jaguars. On the other side, the Raiders have Derek Carr, who won’t play long, if at all, Jarrett Stidham, Nick Mullens and Chase Garbers. Let’s look at Hall of Fame Game odds and Hall of Fame Game picks.

The Jaguars won’t be dressing either of their top two quarterbacks, as head coach Doug Pederson said Lawrence and Beathard are out. That means Jake Luton will be playing most of the game for Jacksonville. Second-year running back Travis Etienne is also out. Pederson said he has a lot of young players he wants to look at. "It's still evaluation time, we're still evaluating our roster," Pederson said to the media, "We've got a lot of young guys and a lot of battles that we want to start seeing in game situations."

One thing that is abundantly clear about the Jaguars this season is that they have a real NFL head coach running the show. Last season Urban Meyer was a joke. He simply didn’t know how to coach an NFL team. “It feels good to be a part of a professional locker room, not only in the locker room but also when you talk to the coaches,” Jacksonville team captain Josh Allen said. “It’s a professional setting. ... He’s not getting on us; he’s letting us know what’s real and he’s talking to us like grown men. With that, nothing but respect. We want to grow.”

Pederson won a Super Bowl with the Eagles, so he has the respect of his players. He treats his team with respect and his players have responded. And he isn’t afraid to play rookies. “You draft these guys for a reason, and the reason is they need to play,” Pederson said to the media, “We need the depth. We need the talent. We need maybe possibly to fill a hole. There’s no better time than right now to let them go through a practice and make mistakes, have successes and be able to coach all that right now than say Week 1 or 2 of the regular season, when it’s their first time.”

Don’t expect to see Carr for more than a series or two, if he plays at all. The Raiders need to see what they have in Stidham and Mullens so expect those two to get the majority of the playing time. Chase Garbers may get some mop up duty. New head coach Josh McDaniels will want to get his backup quarterbacks familiar with the offense so they can step in if Carr gets injured.

McDaniels realizes that it will take some time for his players to get up to speed with the new systems. “I think both sides of the ball are trying to do the right things. We’re just not there yet in terms of being able to do it over and over and over again consistently, which is not unique to this year,” McDaniels said to the media, “We didn’t expect it to look perfect at this point. We’re just gonna try to use these days that we have today and tomorrow to build on this, so, hopefully, we can improve those things and make them more consistent.”

The Raiders would seem to have the edge in terms of the quarterback rotation, but it is not a huge edge. The odds on this game are basically a toss-up and I agree. The total is really low, but historically these Hall of Fame Games have been pretty dull. There is no value in betting a total this low to go under, as it could go over by accident with a number of 30.5. I’ll go against the grain in this one and take the game over the total.

Check out the latest Hall of Fame Game odds at SugarHouse.