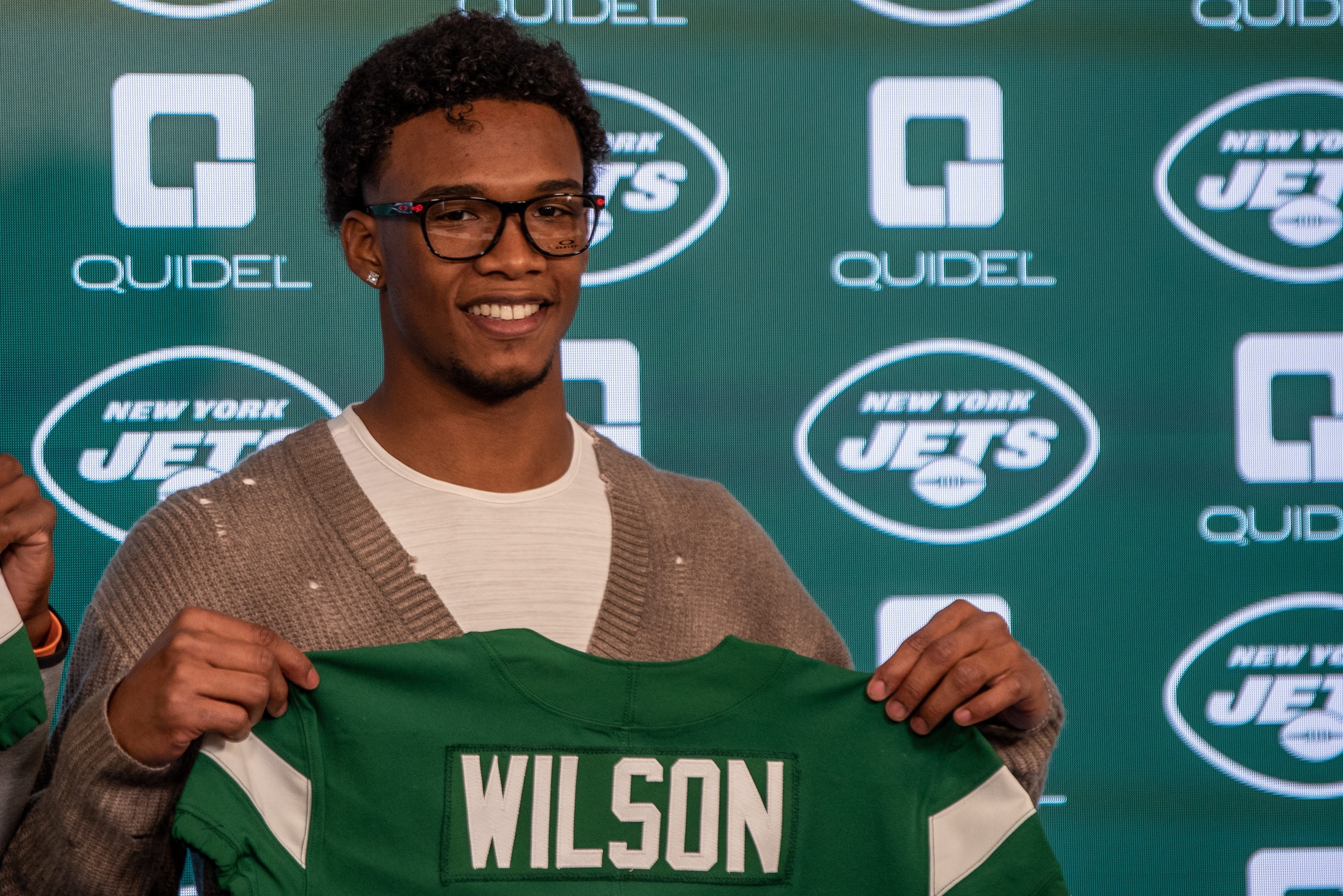 The installment of a brand new coaching staff didn’t do much to move the needle for the New York Jets last year. The 4-13 SU record saw the franchise win five or fewer games for the fifth time in the last six seasons. On top of that, the team also proved to be a loser for NFL bettors after compiling a 6-11 record against the closing NFL betting lines. Though Robert Saleh’s first season at the helm didn’t necessarily go as planned, there’s optimism both within and outside the locker room that this year’s team could take a gargantuan step forward. While the regular season win total currently sits 5.5 at DraftKings Sportsbook, heavy vigorish is attached to the high side of the impost. One of the reasons why is because of the first round GM Joe Douglas and his staff put together in this past year’s NFL Draft. Along with selecting CB Sauce Gardner and DE Jermaine Johnson II to inject needed life in a wretched defense, WR Garrett Wilson was also taken to give QB Zach Wilson another explosive weapon to utilize in his second go-round as the Jets QB1. From the looks of it, the betting markets are extremely bullish on the first-year pass catcher making an eye-opening impact throughout his rookie season. Let’s take a deep dive on his player props and see if we can’t make a few shekels betting them.

The Jets passing offense averaged fewer than 260 yards per game a season ago (No. 30). Quarterbacks combined to throw a grand total of 17 touchdowns and 19 interceptions. Brutal is the only way to describe what little occurred through the air whenever this offense took to the field.

That however could change in 2022-23 with the front office making some nice moves both via free agency and the draft to rectify the issue. NFL bettors could see vast improvement on this side of the ball should health actually be on the unit’s side unlike it was last year with Wilson, Michael Carter, Elijah Moore, Corey Davis, and Mekhi Becton all suffering nagging or season-ending injuries. But with all the additions and players returning healthy, where does Wilson fit in the grand scheme of things?

So exactly what will the target disbursement look like in New York this season? When Moore was healthy and on the gridiron, the former Ole Miss Rebel snared 43 of 77 targets and turned them into 538 yards and 5 TD. He averaged a tick under 4.0 receptions per game as well as 12.5 yards per snare. Corey Davis – when healthy – reeled in 34 receptions for 492 yards and averaged nearly 15 yards per reception. Nobody else did much else to separate themselves from the pack. While those numbers dictate plenty more opportunities being made available, we also need to keep in mind that New York went out and snagged a pair of capable tight ends in C.J. Uzomah and Tyler Conklin who will also take a chunk of the targets away from the Jets newcomer.

Should it come to pass that Wilson settles in as the team’s second wide receiver option behind Moore, he’s going to have an excellent opportunity of going for 750+ receiving yards. I however am skeptical about that occurring. New York inked Davis to a lucrative three-year deal last offseason, and he’s only entering the second year of that agreement.

Whether we like it or not, Davis is still going to be a focal point of this offense for as long as he can remain on the field before the injury bug takes a predictable bite out of him. To top it all off, I think rookie RB Breece Hall will play a huge role in the offense’s mindset and game script every passing week. He currently sits ahead of Wilson on the Offensive Rookie of the Year odds at DK (+900), and you know OC Mike LaFleur will be itching to get the ground game going after ranking dead last in attempts last year; mostly due to trailing in every game. Due to competition for targets and the Jets possibly instituting a more run heavy approach, it’s going to be tough for Wilson to surpass this number.

While I’m not buying as big a season from Wilson in terms of yardage as suggested, I do expect him to be a popular target when the Jets are in the money zone. Wilson only dropped a total of six passes throughout his three years in Columbus; a figure that equated to a 90 percent catch rate!

The fact that he possesses blazing 4.3 speed only lets it be known even more that he’s destined to excel at this level; that’s historically been the case for pass catchers selected within the first 10 picks of the draft. His uber-talent saw him double up his touchdown production from the prior year in his junior campaign at Ohio State. This kid knows how to get into the end zone! I firmly expect Wilson to catch onto that quickly and look for No. 17 with regularity with points there for the taking. As such, I’ll lay the heavy -140 juice on the over and expect this shiny new Jet to at the very least reel in four touchdown strikes over the course of a 17-game schedule.