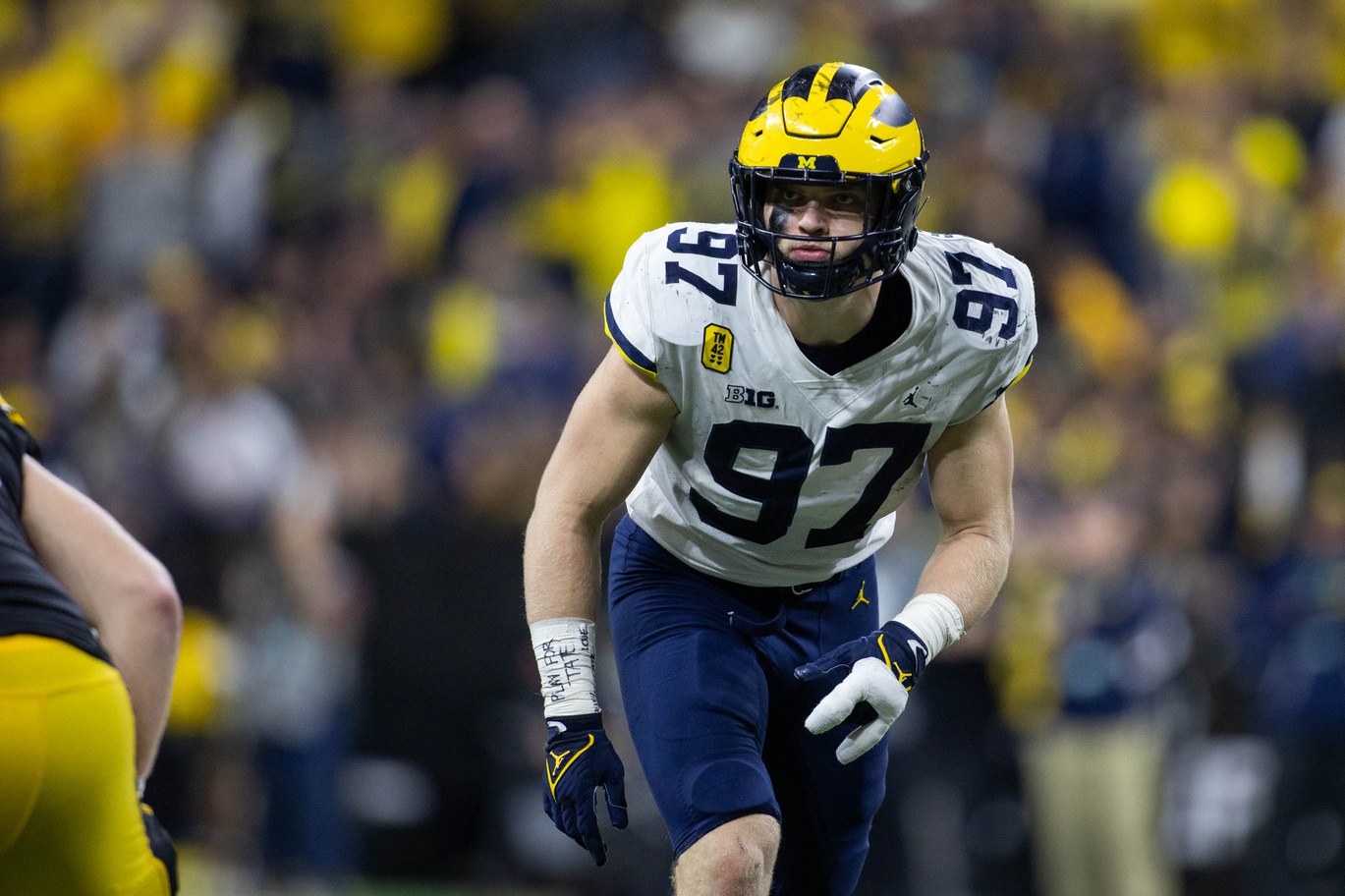 For the second straight year, the Jacksonville Jaguars earned the No. 1 overall pick in the NFL Draft. As such, it’s clearly obvious that the beleaguered AFC South representative needs much more than a stud at the quarterback position to improve upon it being nothing more than cannon fodder for the other 31 teams to embarrass. The Jags have managed a grand total of 15 wins since just coming up short to the New England Patriots in the 2018 AFC title game. Trevor Lawrence’s first go-round as an NFL QB1 was forgettable to say the least. Urban Meyer failed miserably in coaching up what was already considered to be a below average roster. The end results speak for themselves (3-14, 5-12 ATS). With Cam Robinson franchise tagged for the second straight season, many NFL bettors attacking the NFL Draft pick odds seem to be of the belief there’s no way Jacksonville looks to improve its front wall with the No. 1 overall pick. So much so that Michigan’s Aidan Hutchinson has turned into the decided favorite at BetRivers Sportsbook to hear Roger Goodell call his name first come April 28. I’m not buying it! The move makes absolutely no sense for a Jaguars team that desperately needs to start doing a better job of protecting its crown jewel at all costs. That still doesn’t mean Hutchison doesn’t go first overall; if you catch my drift. The following are my favorite, underdog and longshot selections to potentially be selected No. 1 overall in the 2022 NFL Draft.

Fresh off winning a ton of hardware which included the Vince Lombardi Award and being named the Big Ten Player of the Year, Aidan Hutchinson is without question the best edge rusher on the board for the 2022 NFL Draft; at least on paper. He wrapped his senior campaign with 14 sacks and 62 tackles (16.5 for loss), and would fit tremendously on any roster badly in need of getting more pressure on opposing quarterbacks. While Jacksonville only mustered at total of 32 sacks with Edge Josh Allen accounting for a team-high 7.5 of them, rushing the passer likely isn’t at the top of upper management’s list heading into the draft. You know who might just be interested in trading up to land his services? None other than the Detroit Lions who just so happens to own the No. 2 overall pick. Only Philadelphia and Atlanta tallied fewer sacks than the Lions last season, so it would make sense for Jacksonville to move down a spot while at the same time garner more draft capital by doing so. If the Jags hold onto the No. 1 overall pick, I expect everyone laying the heavy chalk with Hutchinson to go off the board first to be very upset minutes into the draft. He’s more than likely step to the podium first should they trade down. If you want to go this route, BetRivers is the place you want to do business with considering other books like DK and FanDuel are currently offering him up at -250 and -280 respectively.

I’m well aware that Evan Neal comes from the offensive line factory otherwise known as the Alabama Crimson Tide and is a mammoth sized specimen that plays 50lb lighter, but Ekwonu’s body of work while at NC State is something I simply can’t ignore. It’s confirmed that he has a multitude of syrup bottles littered around his pad to show off all the pancake blocks he administered throughout his stay in Raleigh. The kid’s an athletic freak and a mauler when it comes to opening holes for the ground game. While he’s got some issues in pass protection and is said to be better situated to play guard at the professional level, NFL Draft bettors are buying into the 6’4” 320lb offensive linemen evidenced by his odds of going off the board shortening up dramatically. When taking the current top-five favorites into account, he was the biggest underdog at +5000 when the offering initially opened up to the betting public. He currently clocks in ahead of Neal at BetRivers Sportsbook which says a ton! Scouts simply can’t stop raving about this kid. Some have compared him to studs like Erik Williams, Lomas Brown and Jackie Slater. Some have even gone on to say that he’s special and destined to go to many Pro Bowls. After wowing at the combine, don’t be shocked if you hear his name called first overall should the Jags hold onto the pick.

Sticking to my train of thought in believing Jacksonville doesn’t trade down and looks to infuse talent into its laughable offensive line, Cross is the best bet of all the O-Line longshots to hear his name open up the 2022 draft proceedings. Initially a 5000-1 choice to go first per the NFL Draft tracker over at SportsBettingDime.com, the current pay-off doesn’t paint a picture of him being drafted first overall ahead of Neal, Ekwonu or even Hutchinson. That being said, he did get some burn at the end of February plummeting as low as +3700 before going back up a few weeks later largely due to Hutchinson going into orbit. PFF had the #HailState native ranked No. 1 on their big board after dramatically improving the amount of pressures conceded in his sophomore season; only 16 pressures allowed on over 700 pass-blocking snaps! This is more than likely a huge reach with the other two aforementioned hogs ranking out ahead of him. Still, it’s worth a beer money dart throw just in case.