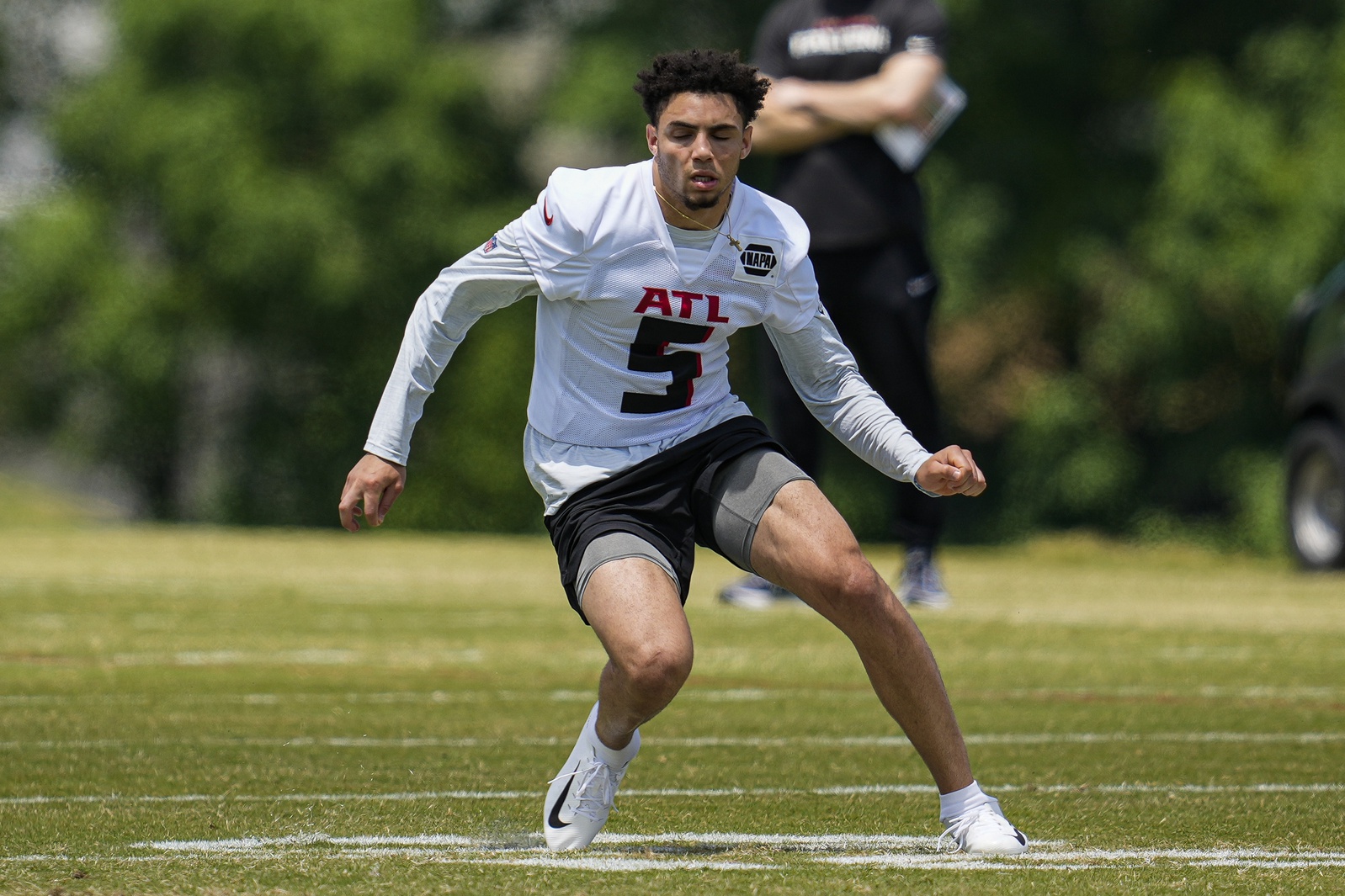 I don’t know about you, but I was pretty shocked to hear Roger Goodell announce Drake London as the first wide receiver selected in April’s NFL Draft. Ohio State’s Garrett Wilson was the odds-on -125 favorite to be the first wide receiver selected at DraftKings Sportsbook followed by Jameson Williams (+220). London offered up a healthy +270 return on investment after the Atlanta Falcons snagged him with the eighth overall pick. With Calvin Ridley suspended for the 2022-23 season and needing someone to pair up with stud tight end Kyle Pitts, the front office decided the former USC standout was their guy regardless of badly needing to shore up a defense that’s stunk out loud for a handful of seasons now.

Whether you feel it was a reach or not, those booking the bets look to have some major respect for the kid evidenced by his player props listed down below. Let’s dig into them and see if we can’t make a few bucks!

Though London doesn’t have the greatest speed of this year’s wide receiver crop, he’s a big bodied target with great hands that’s shown he can thrive playing in both the slot as well as on the perimeter. As talent starved the Falcons pass catching corps was with Ridley suspended and Russell Gage bolting for Tampa Bay in the offseason, his abilities checked all the boxes enough for GM Terry Fontenot to put his neck out and take a chance. While the Falcons quarterback situation leaves much to be desired, I fully expect London to mix seamlessly into Atlanta’s attack and thrive as the possession receiver he is regardless of whether it’s Marcus Mariota or rookie Desmond Ridder slinging him the pigskin.

Due to possessing one of the worst total and scoring defenses in the league a season ago, the Falcons were forced to throw the football a ton. The offense threw the ball nearly 61 percent of the time (No. 9) and averaged over 33 passing attempts per game (No. 19). The only reason it wasn’t more was because it only converted 38.9 percent of its third down tries (No. 19) and a grotesque 41.7 percent of its fourth down attempts (No. 28). Bottom line, Atlanta’s offensive efficiency was nightmarish in Arthur Smith’s first go-round at the helm. London however, couldn’t have fallen into a better opportunity to thrive as soon as his rookie campaign.

While Pitts is destined to take home a majority of the looks, there’ll still be plenty more to go around with London battling the uninspiring Bryan Edwards, Auden Tate, and Olamide Zaccheaus for targets. By far the most talented and biggest of the wide receiver group, you can “Sharpie” at least 100 targets for the former Trojan and it wouldn’t surprise to see him sniff 150! Due to the target volume alone, London should be able to hit the 765-yard plateau with relative ease; provided the injury bug doesn’t hamper him like it did last season in SoCal. Should that prove to be the case, London will be in the running for the Offensive Rookie of the Year Award. He currently rates out with an 8-1 return on investment behind Treylon Burks (+750) and Kenny Pickett (+500), and ahead of Breece Hall (+900) as well as Garret Wilson, Chris Olave, and Skyy Moore (+1000).

Matt Ryan threw for a grand total of 20 touchdowns his final season in “Hotlanta.” If you can believe it, only one of those touchdown strikes went to rookie Kyle Pitts who still reeled in a team-high 68 receptions and turned them into 1,026 receiving yards. The Falcons passing attack was more or less inept last season, and I’m not sure it will be that much improved with what the offense has in its possession under center. Positive regression in the touchdown department is sure to go Pitts’ way, and Cordarrelle Patterson is also still on the roster.

Atlanta only averaged 1.8 offensive touchdowns per game last season (No. 27), but did average 3.2 red zone scoring attempts per game (No. 16). If better overall offensive execution is achieved in the second season under the current coaching staff, London will have a shot at surpassing this impost. That being said, I can’t help but think Pitts and Patterson will be the primary targets for whoever nestles in under center when it matter most. I lean to the under 4.5. If I’m wrong, that means London will have put forth one heck of a rookie campaign that will have him in the running for Offensive ROY!