Dolphins and 49ers to Play to Low Scorer 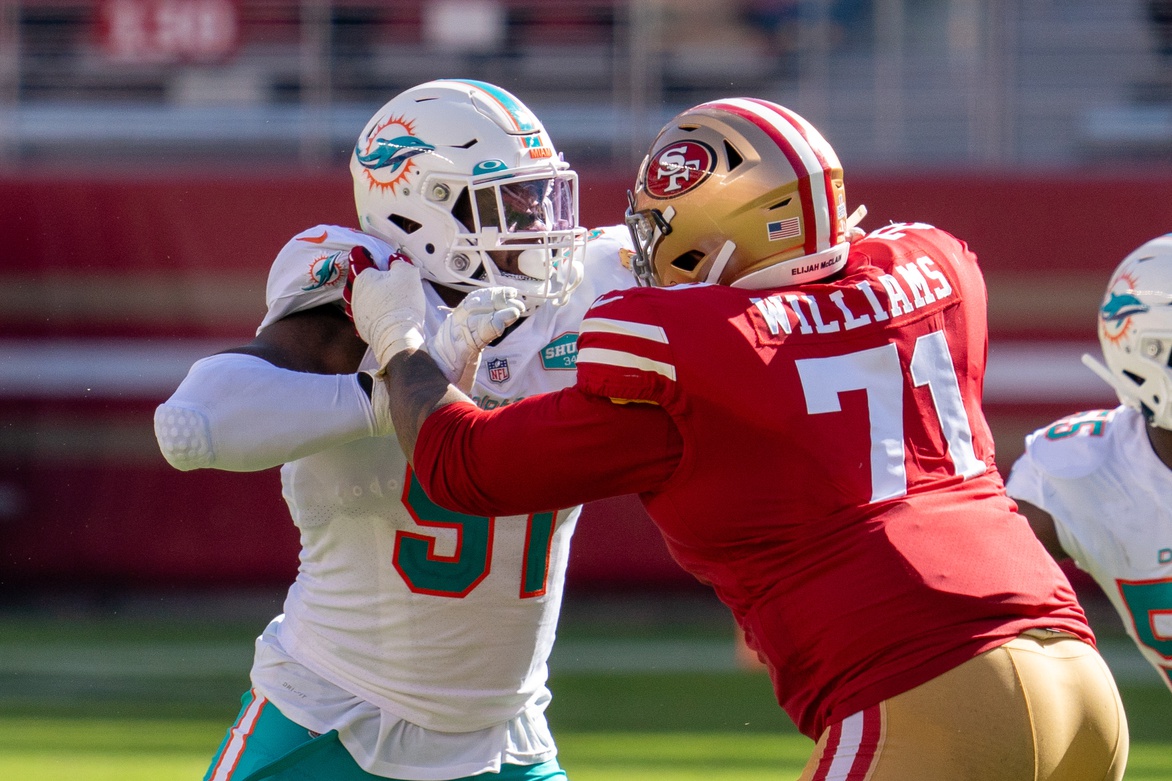 It was a horrific showing for us in the total department last week after failing to log a single ticket cash through three tries. The variance monster did however play a large role. Our under position in the Ravens/Jaguars game looked golden through three quarters with a total of 22 points on the board, but then the team’s exploded for 33 points in the fourth. But that wasn’t the worst of the beats! I touted the over 30.5 of the Miami Dolphins’ team total. Tua Tagovailoa and Co. put 30 on the board by halftime. They ended up winning 30-15 – insert puke emoji! Closing the nightmarish showing out was an over position in the Saints/49ers game that never had a shot of coming in after San Fran pitched a 13-0 shutout. Hopefully things play out much differently in Week 13 and we can get back to adding to the bankroll over at BetRivers Sportsbook.

The total for this non-con clash hit the board 45.5 but has since fallen a full point due to a bulk of the bets and money hitting the low side of the impost. I get that Tennessee just held the Bengals to 20 points, but this is a terrible matchup for their defense running up against a dual-threat quarterback that spearheads one of the more balanced attacks in the NFL. This is also a revenge spot for A.J. Brown who will be looking to dissect a porous Titans secondary that he took advantage of in practice throughout the first four years of his professional career. Coming off last week’s stinker, I expect No. 11 to show out right from the opening kick!

But Philly’s poor excuse of a run defense will have its hands full dealing with Derrick Henry who will also be looking to bounce back after managing a paltry 38 yards on 17 carries against a resurgent Bengals defense last week. As dominant Philly has been in the secondary, it’s been wretched against the run in allowing upwards of 120 yards per game and a healthy 4.7 yards per carry. This is the classic matchup of offensive strengths running up against defensive weaknesses, and I firmly expect it to result in a higher scorer than the masses expect.

I’m 100 percent sold on the New York Jets defense. I’m not sold on the offense whatsoever regardless of the unit showing out in Mike White’s return under center. Before calling me out for that statement, let’s all keep in mind exactly what the Jets offense ran up against last week. Chicago’s secondary ran a skeleton crew out there with both Jaquan Brisker and Kyler Gordon held out due to concussions. While I get that Minnesota’s pass defense ranks out as the absolute worst unit in the NFL right now, I’m still having a hard time seeing the Jets flexing their offensive muscles on the road in a venue that can be very intimidating. Road Mike White has always been much different than home Mike White, and I foresee that trend continuing.

As for Kirk Cousins and the Vikings offense; it’s going to have its hands full dealing with a Jets defense on the rise. NY has conceded the second fewest overall points in the AFC and has allowed only one of its last seven opponents to hit the 20 point plateau. It’s stout versus the run and has a stud cornerback in Sauce Gardner who’s currently favored to take home the Defensive Rookie of the Year Award. His primary goal on Sunday will be to lock Justin Jefferson down. Against a similarly ranked Dallas pass defense per DVOA, JJ was held to just three catches for 33 yards in an embarrassing 40-3 loss. I don’t expect it to be as bad this time around, but let’s just say I’m not running to the window to hit the over of Jefferson’s receiving prop.

I’m a bit wary about heading back to Silicon Valley to try my hand wagering on another total, but I believe this to be an excellent spot to fade the market who looks to be of the belief the Dolphins and 49ers exchange scoring blows all game long. This total opened 45.5 and has been bet up a full point. I’m not buying it! Jimmy Garoppolo hurt his knee in the fourth quarter of last week’s win over the Saints. His mobility will be tested versus a Dolphins pass rush that’s logged a near 35 percent pressure rate over the last month. Christian McCaffrey popped up on the injury report this week with a knee issue, and Deebo Samuel hasn’t been himself seemingly all season. Elijah Mitchell was also just put back on IR.

As for the Dolphins, Tua Tagovailoa will be without Terron Armstead and possibly Austin Jackson along the offensive line. That’s a bad omen with Nick Bosa and the Niners pass rush generating a 37.3 percent pressure rate. This position could go sideways real quick with the high possibility of Tyreek Hill or Jaylen Waddle taking a dump-off to the house, but I’m thinking both defenses and place kickers will be a lot busier than a majority of total bettors would like. Kyle Shanahan likely wants nothing to do with getting into a shootout with his protégé. Instead he’ll bank on his rushing attack to shorten the game and his defense to keep the damage to a minimum.