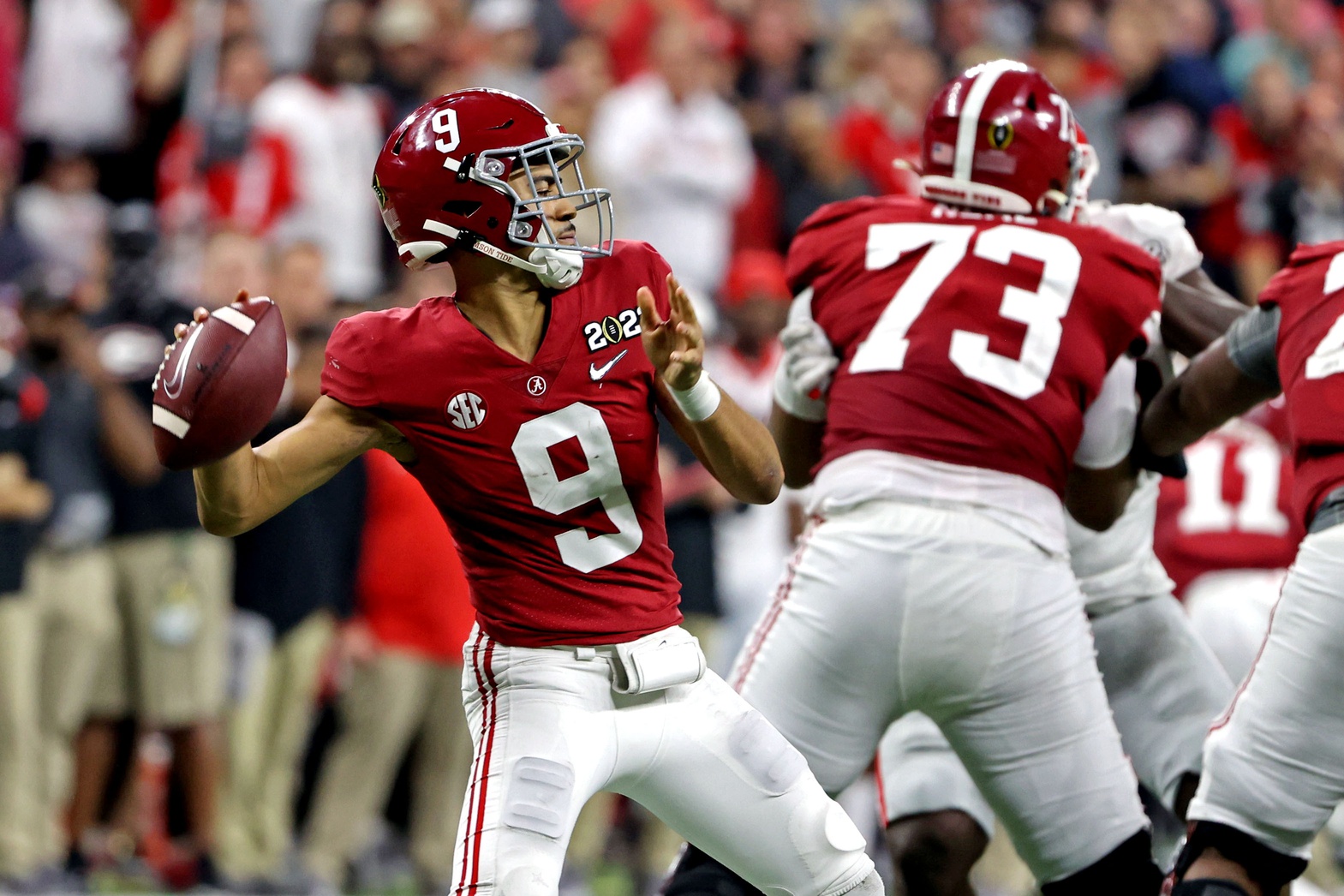 An SEC entrant has won the national championship in five of the eight seasons since the College Football Playoff debuted back in 2014. The Alabama Crimson Tide won three of those titles, and would’ve entered the 2022-23 college football betting season defending two-time champs had Nick Saban’s kids not allowed a 7-point halftime lead escape them in last year’s title game against the eventual champion Georgia Bulldogs. Does it come as any surprise to see the Tide and Dawgs currently sitting atop the SEC title odds at SugarHouse Sportsbook? UGA went on to win it all, but still allowed for Bama to win the regular season title after shockingly getting whipped 41-24 in the conference championship game. In doing so, the Crimson Tide went on to snag the SEC title for the third time in the last four years as well as the eighth time in the last 13! To be the best, you have to beat the best. Alabama is still the best, so they get my nod as the favorite to back early on. That being said, there’s no value at the current number. As such, I’ve got my eye on an underdog and longshot dart throw you’ll want to throw your money at early on as well.

Wash, rinse, repeat. That’s been the motto of the Tide’s program since Saban started making his home in Tuscaloosa back in 2007. Since then, all the program has done is win eight SEC titles and three national championships. Along with being the favorite to win the conference for the third straight season, Alabama is also the running +150 favorite to win a fourth title under Saban’s watch per the current NCAA Football Championship odds at SugarHouse Sportsbook. Reigning Heisman Trophy winner Bryce Young returns to lead the offense fresh off throwing for nearly 4,900 yards and a 47:7 TD/INT ratio. While the offense loses a pair of stud wide receivers to the NFL, there’s still plenty meat on the bone returning along with the addition of GTECH RB Jahmyr Gibbs who combined for over 1,200 scrimmage yards a season ago.

But for the Crimson Tide to get back to winning championships, the defense is going to have to revert back to prior title team expectations. The unit conceded over 20 points per game a season ago which amounted to being the most points Bama yielded since Saban’s first year at the helm. It had all kinds of issues defending opposing passing attacks (No. 62). Stetson Bennett gouged the secondary for 340 passing yards and a trio of touchdown strikes in the CFP finals! With edge rusher Will Anderson – last year’s sack leader – and both safety positions returning along with LB Henry To’oTo’o, I’m expecting much improvement to occur on this side of the ball. That paired with Young’s silky smooth ability to run the offense will make it incredibly tough for any team to trip them up in this loaded conference. You know all hands will be on deck for when Jimbo and the Texas A&M Aggies pay Bryant-Denny Stadium a visit in early October!

This recommendation came just short of being Florida instead. I’ve already got my popcorn ready waiting to see what Billy Napier and a brand spanking new coaching staff can get done in Gainesville this season. However, I think it takes some time before the Gators truly go off under his watch. As such, I’m going to defer to Lane Kiffin and the Rebels with Ole Miss coming off a fantastic 10-3 campaign even though the team dropped a 21-7 decision to Baylor in last year’s Sugar Bowl. No, Matt Corral won’t be under center for what amounted to the nation’s No. 4 ranked total offense that racked up better than 507 yards per game and dented scoreboards for better than 35 PPG. Instead, it will be USC QB transfer Jaxson Dart who impressed in his limited playing time as a freshman for the Trojans last season. Though a competition for the QB1 job is currently playing out with Luke Altmyer, I’d be shocked if he doesn’t earn it.

Whoever lines up under center will get the benefit of Zach Evans in the backfield after he combined for 1,200+ scrimmage yards and 10 touchdowns in his sophomore campaign at TCU. There’s plenty of depth in the backfield to go around as well. Ole Miss does have some question marks on the defensive side of the ball with only six starters returning from a unit that will now have new coaches calling the shots with DJ Durkin taking his talents to College Station. While road trips to LSU, Texas A&M, and Arkansas won’t be fun at the tail end of the season, the Rebs also get Kentucky, Auburn, Alabama, and Mississippi State at home. A cakewalk first half of the schedule should have them ready to go to war once it toughens up. If everything comes together by then, Ole Miss could be dangerous!

I’m scratching my head over Mike Leach’s kids getting absolutely zero respect from the betting markets since the SEC title odds surfaced at SugarHouse. Hail State initially hit the board as 200-1 choices to win the conference. Those odds immediately plummeted all the way down to +6600 before bloating back up to 125-1. Why? It’s pretty simple really! Everyone is betting Bama, Georgia, and Texas A&M to win the title right now. Nobody is paying any attention to any of the teams at the bottom of the heap. I get it; why would they with the top dogs routinely coming through without offering up much in the way of line value. If you’re running to the betting window to back Alabama as a chalk right now – regardless of my recommendation up above - you’re not betting futures correctly. Remember, the Crimson Tide initially opened at +200. The ship has sailed on their line value! Wait to see what happens in Week 2 at Texas!

That’s not the case with Mississippi State who has potential Heisman winner (+6000) Will Rogers back under center off throwing for 4,700 yards and a 36:9 TD/INT ratio in his sophomore season. Other pieces to last year’s offense that ranked No. 23 overall while owning the No. 3 ranked passing attack also return. On top of that, the nation’s No. 22 ranked total defense that shut opposing ground games down (No. 10) returns eight starters from last year’s unit. They get A&M, Arkansas, Auburn, and Georgia in Starkville. Something tells me the “Mad Scientist” will have something under his sleeve for this his third year overlooking the Bulldogs program. Should it go 3-1 or 4-0 through the first month, you’ll be pissed you didn’t buy in at the current offering!