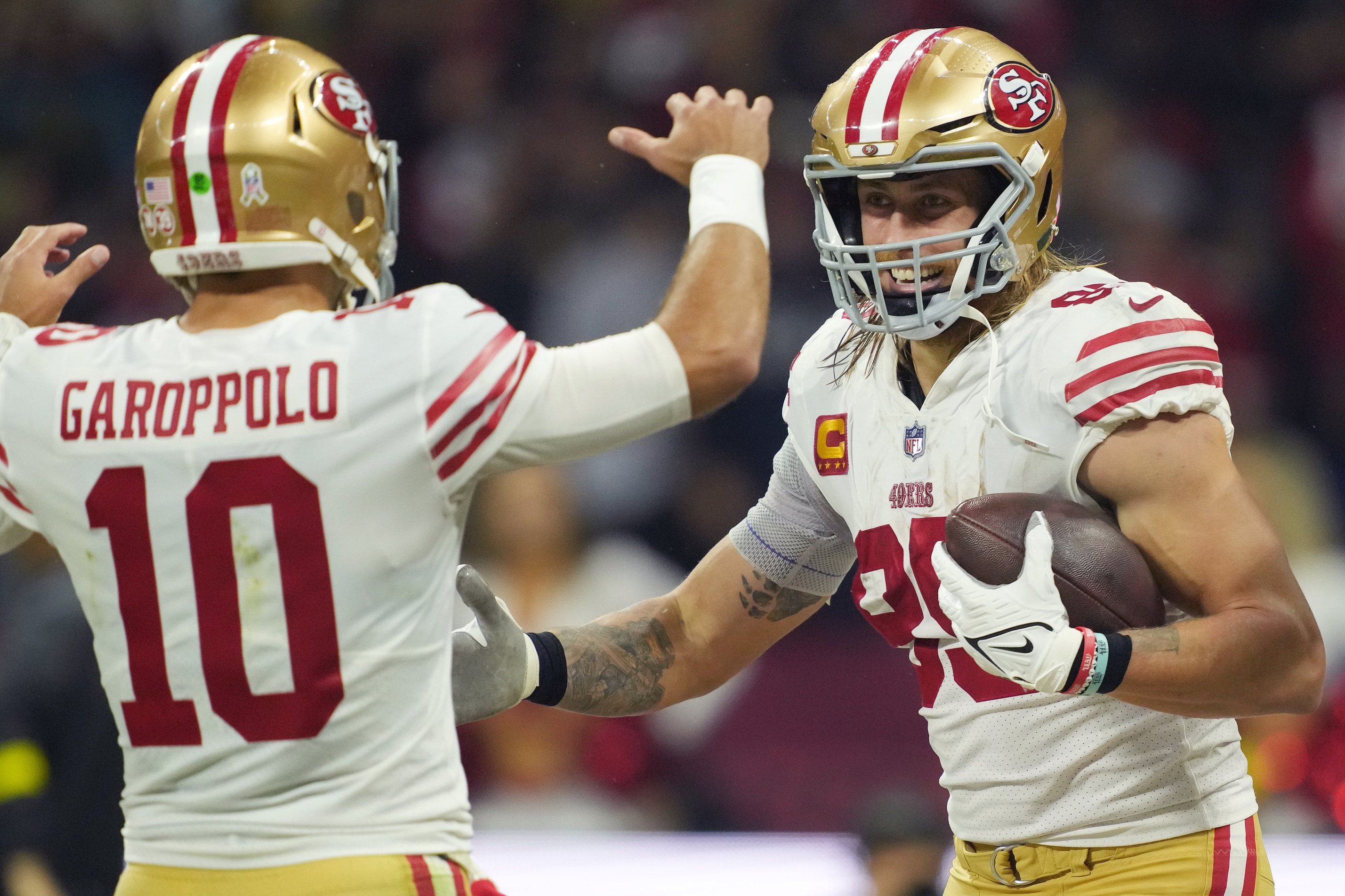 The San Francisco 49ers reclaimed the top spot in the NFC West after skunking the division rival Cardinals in front of a nationally televised audience in Mexico City. Last I broke the odds to win the NFC West down a couple weeks back, I yelled from the roof tops to buy the discount on Kyle Shanahan’s squad at PointsBet Sportsbook; hopefully you listened! As great a bounce back campaign the Seahawks have put forth, this is the Niners year to take home bragging rights. But it doesn’t stop there, so let’s take a deep dive into the division’s current futures odds and see if anything should be added to the portfolio heading into Week 12.

Already an owner of the 49ers winning this division at a plus-money return, I saw this coming. Monday’s offensive explosion gave NFL bettors a glimpse of what the Niners offense can look like with all the pieces to the puzzle firing on all cylinders. There isn’t an offense in the NFC that can compete when Jimmy G, Christian McCaffrey, Elijah Mitchell, Deebo Samuel, Brandon Aiyuk, and George Kittle are all in sync with one another. Yes, I’m looking at you Philadelphia, Dallas, and Minnesota!

After logging back-to-back wins over the Chargers and Cardinals, San Francisco is now decided -400 favorites to take home its first division title since 2019. While the value is all but gone, San Fran is still offering up 7-1 and +275 returns to win Super Bowl LVII and the NFC respectively. While those payoffs pale in comparison to the +1200 and +475 mentioned two weeks ago, you’re still getting decent paybacks on arguably the best team the NFC currently has to offer.

Take fliers now at a reduced rate of return if you ignored everything I had to say last time out!

With the 49ers handing Seattle an ugly 27-7 defeat as 8.5-point home favorites back in Week 2 and finally pulling even in the standings, the Seahawks saw their lead atop the NFC West go by the wayside while on bye. With five of the final seven games to be played in front of the 12th Man – including a Week 15 matchup against the aforementioned 49ers – Geno Smith and Co. still have a shot to pull off an impressive worst-to-first feat.

As much as I want to think Pete Carroll’s troops have it in them to see this all the way through, the roster’s youth is ultimately holding me back. Upper management did a phenomenal job of retooling in the offseason, but the talent at hand needs to marinate more in my opinion before I can confidently ride this team to the Promised Land.

I already recommended hitting the over of their 9.5-game adjusted season wins total a few weeks back. After losing to the Bucs in Munich, it remains 9.5 now with heavier -115 juice attached to the over. Vegas, the Rams, and Panthers are next up on the docket. At the very least, we should be halfway towards going over the impost once that huge home tilt with the Niners comes up on the schedule.

Not much to report here. I’m already sitting pretty with an under 8.5 ticket on the Cardinals season wins total. After getting destroyed by the 49ers on Monday night, Zona enters Week 12 4-7 SU and 5-6 ATS with games still remaining against the Chargers, Patriots, @Broncos, Buccaneers, @Atlanta, and @San Francisco. Do you see five wins in that mix?

The only thing left to be decided is Kliff Kingsbury’s tenure. The Week 10 outright win at the Rams is the only reason he’s still roaming the sideline. The clock is ticking. Tick. Tock! Tick. Tock!

What a fall from grace for the Rams who’ve seen their adjusted wins total go from 10.5 at the season’s open to 9.5, and then 8.5 before the folks at PointsBet took it off the board. The defending Super Bowl champs odds of making the playoffs currently clock in at 14-1 with NFL bettors now forced to pony up $5K to win a Benjamin should they desire to wager on Sean McVay’s troops missing out on the festivities for only the second time in the last six years.

With Matthew Stafford and Cooper Kupp likely done for the season, “No” is a great bet!