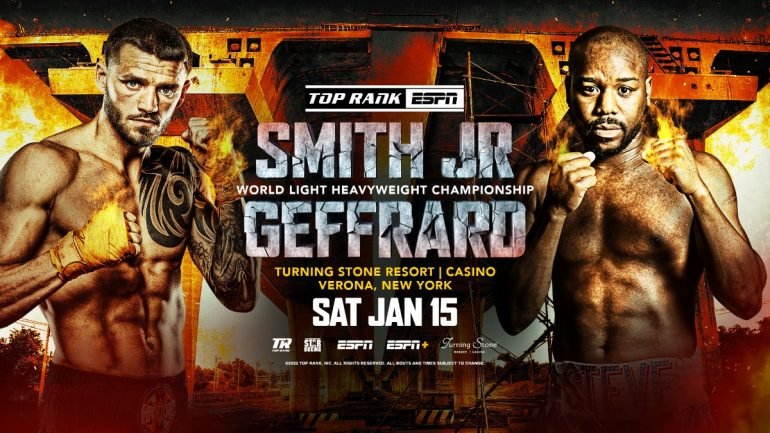 Steve Geffrard is known for having sparred with the best boxers in the business. But on Saturday, Geffrard has the opportunity to fight for a world championship. On the fly, Geffrard agreed to step in as a replacement opponent for Callum Johnson. Johnson tested positive for COVID-19, ending his shot at an Online Boxing championship fight against Joe Smith Jr. Thus, with less than a week’s notice, Geffrard gets his opportunity in place of Johnson. Smith will make the first defense of his WBO light heavyweight championship on January 15 in an ESPN-televised main event from Turning Stone Resort Casino in Verona, New York.

On Saturday, January 15, 2022, Joe Smith Jr will face Steve Geffrard for Smith’s World Boxing Organization light heavyweight championship. This fight is scheduled for 12 rounds and will take place at the Turning Stone Resort and Casino, Verona, New York. ESPN and ESPN+ will televise the bout. Smith opened as a -1200 Bet on Fights favorite over Geffrard, who opened as a +700 underdog.

Be sure to check back frequently at the SugarHouse Sportsbook for the latest odds on this championship fight.

Steve Geffrard (18-2, 12 knockouts) said he accepted this unexpected Vegas Odds on Fight challenge to fight Joe Smith for the championship without hesitation. Previously, Geffrard was preparing to fight Gonzalo Andreasen.

“I was actually looking forward to watch Callum Johnson and Joe Smith fight. Their style matchups would have made for a great fight” said Geffrard. “I was sitting in the sauna and my coach Kevin Cunningham called me and said, ‘Man, you’re never going to believe this. They just called for you to fight Joe Smith Jr. for the title.’ I was like, ‘Wow. This is insane.’ It’s crazy that’s how boxing works. This was an opportunity I couldn’t pass up.”

Of course, Geffrard will be stepping way up in Fight Odds class and with a single week to prepare. Geffrard believes that his previous experience working with unbeaten unified champion Artur Beterbiev, long-reigning former champ Sergey Kovalev and Eleider Alvarez has prepared him for this moment.

“Sparring Artur was a great learning experience,” said Geffrard. “He’s a beast. He has devastating power. I worked with Eleider Alvarez, who was stopped by Joe Smith. I also helped Kovalev with several camps. I thought he hit hard.”

Geffrard is playing and talking nice leading up to his Fight Odds Vegas matchup against Smith. Geffrard has been effusive in his praise of Smith.

“Smith is just a really tough guy,” said the challenger. “ Short notice or not, he’s a tough opponent for anybody. He just keeps coming forward. He is well-conditioned and has good power. I’m mentally prepared and focused for a tough guy.”

The Smith fight will serve as just his second actual bout in nearly four years. Following a fourth-round stoppage of Zoltan Sera in April 2018, Geffrard was out of action, other than sparring with the best in the fight game.

“I know many fighters that have trained their whole lives for an opportunity like this, and they never were able to fulfill it,” said Geffrard. “For me to even get that call is just insane. I won’t let this opportunity go to waste.”

Smith has also been polite about his challenger. And there is no reason for him not to keep things low-key.

“I give Steve credit for taking this fight on short notice,” Smith said. “He is a tough guy, and I expect him to bring everything he has for this opportunity. I’m ready to fight regardless of who is in the ring with me. My goal is the same, which is to defend my world title and keep it on Long Island, where it belongs."

In this situation, Steve Geffrard makes for a nice story. But this is real life, not a Rocky movie.

Every day through June, the Top boxing odds and picks can be accessed and made at SugarHouse.