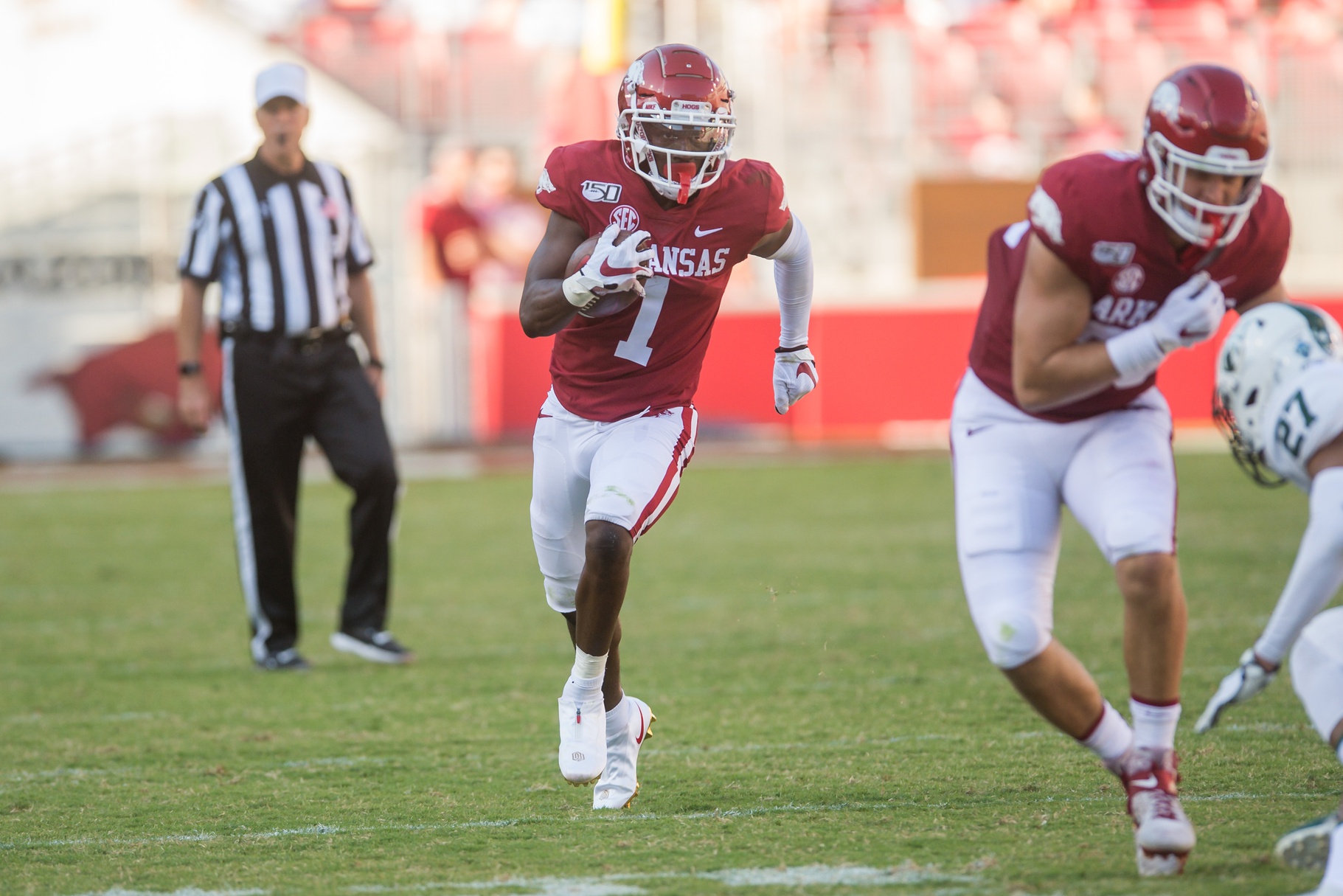 With the Alabama Crimson Tide and Georgia Bulldogs hogging the SEC spotlight, the Arkansas Razorbacks proved to be nothing but an afterthought regardless of churning out the program’s best season in quite some time. A year removed from winning just three games in Sam Pittman’s first go-round as head coach, the Hogs would go on to win eight regular season games before winning and covering against Penn State as 3.5-point chalk in the Outback Bowl. The 9-4 SU and 7-4-1 tally against the closing college football odds is one that should have this team on the up and up.

Surprisingly, linemakers over at BetRivers Sportsbook don’t see it as such, with the teams’ season wins total clocking in at only seven. That likely has to do with sharp CFB bettors hammering the opener of 6.5 early on. Other outs have the impost lined at 7.5 with the underpaying out an attractive plus-money return.

Though Treylon Burks is now strutting his stuff in the NFL, the Hogs still have plenty of grit and determination returning to the gridiron. It boasts a fantastic offensive line and the power running game to get to each and every one of its 12 regular season opponents. And then there’s dark horse Heisman Trophy candidate K.J. Jefferson whose back to lead the offense in his junior campaign; he’s currently paying out at 50-1!

While the SEC West is likely to be represented in the CFP, with Alabama currently the odds on favorite to win it all, the Razorbacks aren’t a team that will bow down to anyone – not under Pittman’s watch. This team will upset a big boy or two and go over its disrespectful win total in the process!

Last year’s squad snapped a string of three straight under against the closing wins total. You have to go back to 2010 when the team won 10 games to surpass its 8.5-game impost. It put itself on the map early on by taking Texas out behind the woodshed and followed it up with a solid 20-10 win over Texas A&M in the school’s annual rivalry game. From there, it would drop three straight; a gross 37-0 skunking at the hands of the eventual national champs, a 52-51 shootout loss at Ole Miss that could’ve gone either way and a head-scratching 38-23 skunking at the hands of Auburn in a game it closed as short 4-point home favorites. The Hogs would only go on to drop one more game the rest of the way; a hard-fought 42-35 loss at Alabama in a game it fought back from a 17-point early third-quarter deficit to make a game of it.

One of the best duel-threats in the country, Jefferson will be out to improve upon a season that saw him throw for over 2,600 yards and a 21:4 TD/INT ratio while also rushing for over 650 yards and 6 TD. He got the benefit of doing work behind an excelled front wall spearheaded by both Ricky Stromberg and Brady Latham. Each is back to open up holes for what was the SEC’s best rushing attack and tenth-best efficient passing game all the while averaging better than 442 yards (No. 29) and 31 points per game (No. 44). You can be sure OC Kendal Briles will be looking to better those outputs this season. Oklahoma transfer Jadon Haselwood is being looked upon as the guy to step in and ease the pain of watching Burks take his talents to Nashville.

As improved the offense was last year, the defense proved to be even better, with it forcing a good chunk of turnovers (No. 11) and being more frugal in the points allowed department. Much of the credit goes to former Mizzou head coach Barry Odom. He’ll be sure to march that 4-2-5 defense onto the field after it accounted for 13 interceptions of opposing quarterbacks last season. While there are some departures, Arkansas made out well in the transfer portal. It also gets stud Bumper Pool back to lead the charge – I can’t believe that’s really his name; how awesome is that?! Look for this unit to improve upon last year’s rankings.

Though the schedule isn’t kind, there’s something brewing in Fayetteville at the present time. This is a proud program currently in the midst of a dramatic turnaround. They get seven at home and only have to hit the true road four times with the bout against the Aggies set to take place in Arlington. As already stated, they will upset a major player. Whether it ultimately turns into a run at the CFP remains to be seen; probably not. Either way, I’m bullish on Jefferson and the Hogs once again exceeding expectations in 2022.